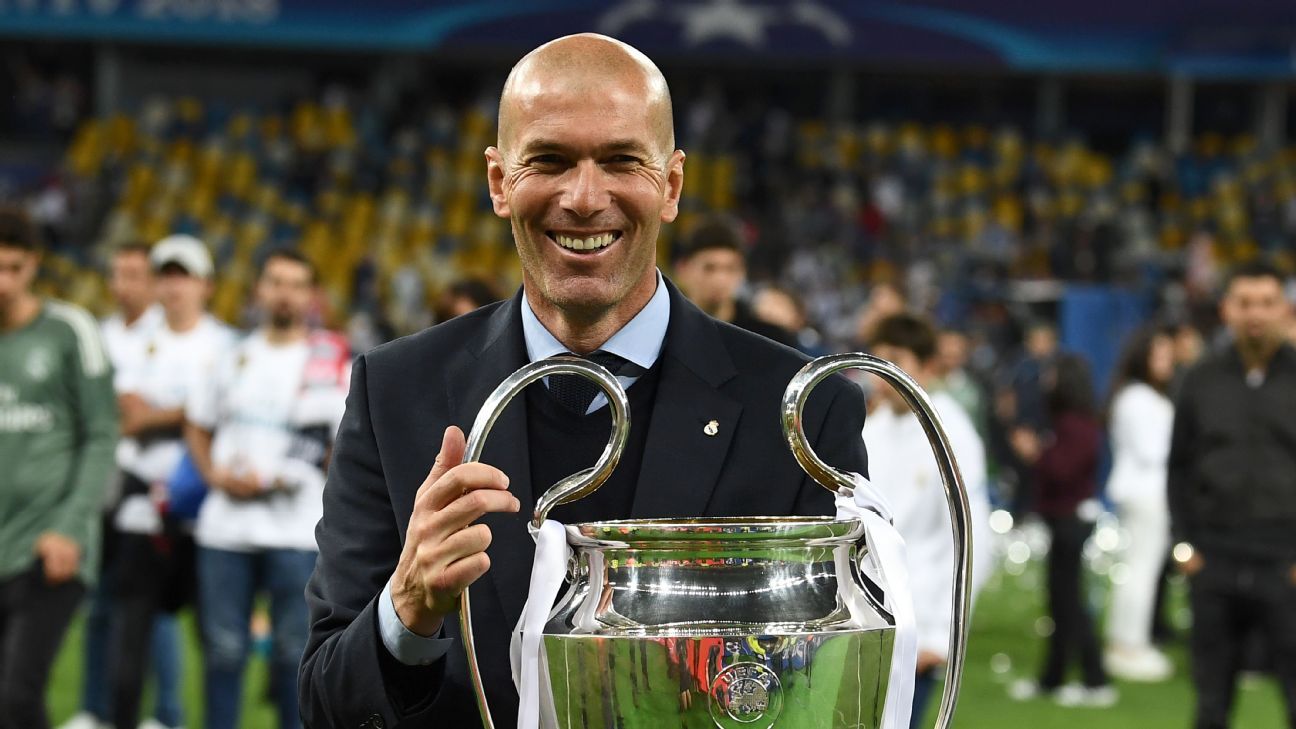 
Zinedine Zidane’s departure from Real Madrid after two and a half seasons did not come as a complete bolt from the blue. The Frenchman had hinted earlier in the season that exhaustion was setting in due to the demands of coaching the club but it will be a tough proposition for whoever replaces him to replicate the Frenchman’s incredible haul of trophies at the Bernabeu, although Zidane’s compatriot Arsene Wenger has put himself front and centre for the gig.

Zidane leaves with nine titles from 13 contested during his reign nestled in the club’s museum and his name will live long in the memory of Madridismo. Only one coach, the legendary Miguel Munoz, won more with Madrid and he required 14 seasons to land 14 trophies. Doubtless, Zidane would swap a few Super and Club World Cup trinkets for a couple of Munoz’s nine Liga triumphs but the 45-year-old has written his own history at Madrid during a more competitive era.

No manager in the history of the game has won three consecutive European Cup/Champions League titles and the Frenchman has every right to draw a line under an unprecedented period of success in the big-bucks era on a high.

Here we take a look at five highlights from Zidane’s 29-month tenure as Madrid boss.

Jose Mourinho sat ashen-faced in the Camp Nou dugout as Barca hammered his nascent Madrid project 5-0 in the infamous “manita” Clasico of 2010-11. Carlo Ancelotti’s debut in the eternal rivalry came 10 games into the 2013-14 season and he left Camp Nou on the wrong end of a 2-1 scoreline. For Zidane it was lucky 13 in La Liga as he took his side to Catalonia and returned with three points after a 2-1 victory, an instant declaration of intent after four Madrid defeats in five previous Clasicos and the turning point for a demoralised Real in 2015-16. Zidane took over a side four points adrift of a rampant Barcelona after 18 games and dragged them to within a point of the eventual champions after 38, a clear sign of the wind changing direction after four years of Liga blanks.

Few could argue that Zidane had a fairly easy ride to the 2015-16 Champions League, but as a novice coach he rode his luck and galvanised a squad that had topped their group over PSG but faced little other competition with Malmo and Shakhtar making up the numbers. Roma were dispatched with relative ease but Wolfsburg was a different matter entirely, a ball-shaped hole in the Germans’ wall allowing a Cristiano Ronaldo free kick to slip through to settle a tense tie.

Manchester City opted for an ultra-defensive approach and conceded once — a deflected Gareth Bale cross/shot forcing an own goal from Fernando — over 180 minutes. Atletico Madrid were typically resolute and beaten on only penalties in the San Siro, but it was a watershed moment for Zidane. Ancelotti had delivered the long-obsessed over Decima after a 12-year wait. It took Zidane six months (with a nod to Rafa Benitez) to deliver the 11th two years later.

Zidane described his only league title as his greatest achievement in his farewell news conference and not without good reason. The Champions League is a crapshoot but the 38-game format in Spain, despite external sniffing to the contrary, is not a case of shooting fish in a barrel and winning the Clasico.

Dethroning reigning champions Barca, who had completed a domestic double the season before, and holding a typically dogged Atletico at arm’s length was no mean feat and Zidane did so with just three defeats, 106 goals scored and holding top spot for 28 of 38 match weeks. Only Sevilla, Valencia and Barcelona were able to take three points off his side, who scored four or more on 10 occasions.

From a goalless draw against Manchester City in April 2016 to the 1-0 home defeat to Betis in September 2017, Zidane’s Madrid netted in 73 consecutive games in all competitions to beat Bayern Munich’s European record of 61 while also matching Santos’ mark of the same number from 1963. Only River Plate have hit the net in more consecutive games, embarking on a 96-game sequence between 1936 and 1939.

Zidane won’t be remembered as a defensive mastermind at the Bernabeu but when his side clicked they were excellent value for your money: Real scored five or more in 15 Liga games during that record-breaking run and three or more eight times in Europe.

Ensuring his place in the history books as the most successful manager of all time in Europe’s elite club competition, Zidane is the only coach to have lifted old big ears three times in succession and only the third to win it that many times overall, alongside Bob Paisley and Ancelotti. En route to glory in Kiev, Zidane masterminded 180-minute victories over PSG, Juventus and Bayern Munich and beat Liverpool — who set a record for goals scored in a single Champions League campaign of 47 in 2017-18 — over 90.

If his first was fairly easy-going, Zidane’s third took the hardest route possible, beating the champions of France, Italy and Germany and stopping Jurgen Klopp’s scoring machine in the final. Luck played its part, as it always does in football, but that should take nothing away from the achievement. It was Zidane’s crowning glory, and one of the reasons he decided to go out on a high on Thursday.