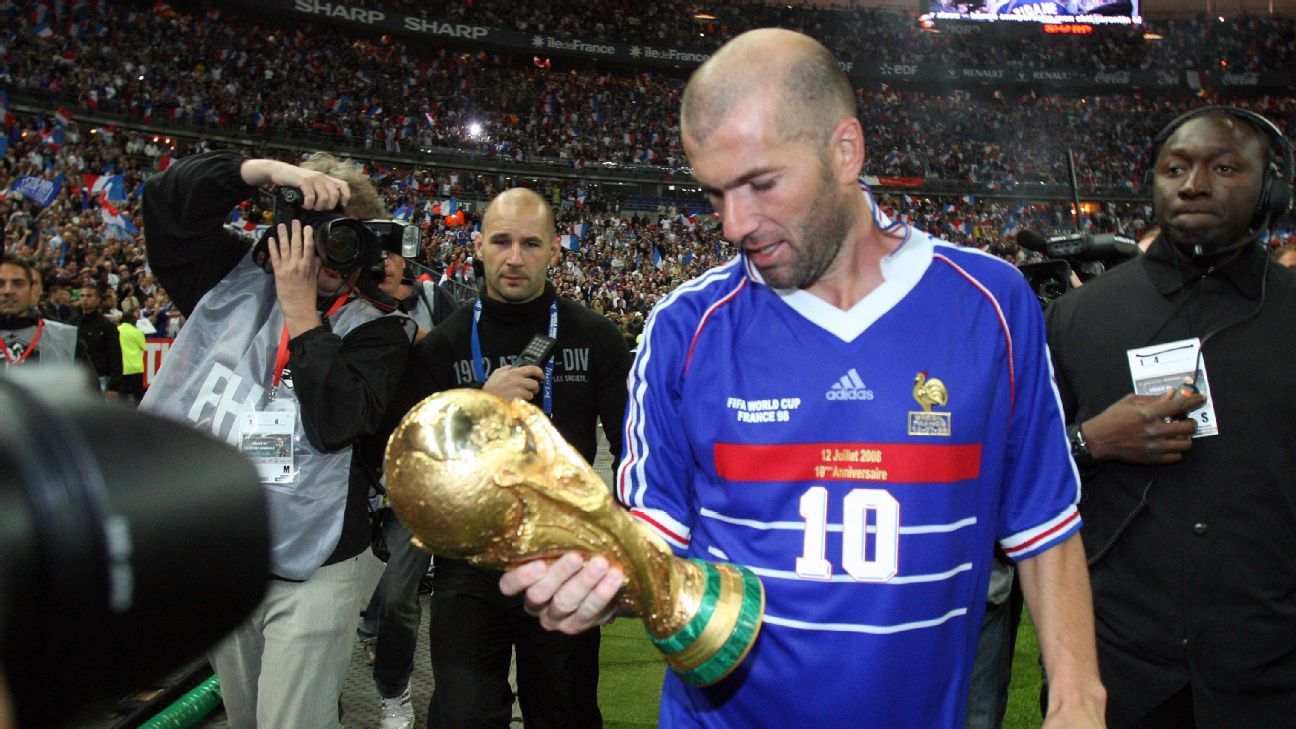 
The night of July 12, 1998, in a cafe near the Paris Opera, I watched a beautiful blonde French woman dance for hours in a “Zidane 10” shirt. Outside, crowds were chanting “Zi-dane President!” His picture was projected onto the Arc de Triomphe above the words, “Merci Zizou.” A few days later, Les Bleus attended “une garden-party” at President Jacques Chirac’s Elysee palace, where France’s Republican Guard played “I Will Survive” (the team’s unofficial anthem) and posh guests chanted “Zi-dane President!”

This week Zinedine Zidane returns to Paris but this time, he’s competing against the French. On Tuesday, his Real Madrid defend a 3-1 lead in the Champions League second round against Paris Saint-Germain. Zidane has spent almost all of the past 20 years outside France. He may never live there again yet he remains his country’s favorite athlete, and not only because of 1998.

Most modern French sporting heroes are of immigrant origin. Zidane’s workman father emigrated from Algeria in the 1950s to the Parisian suburb Saint-Denis by the future site of the Stade de France, venue of the 1998 final. The Zidanes settled in a Marseille slum, where the boy “Yazid” (the family nickname of the youngest of the five children) shared a room with his brother Djamel. In a sometimes fiercely anti-immigrant country, Zidane has come to be seen as the “good immigrant,” a hard-working, patriotic family man. Even most voters of the far-right Front National party love him.

Zidane grew up a mad-keen Olympique Marseille fan and named his son, Enzo, after Enzo Francescoli, an OM centre-forward of his childhood. But crucially for his enduring popularity in Paris, he never played for or coached Marseille. Instead he began his career further east along the coast at Cannes, a club that arouses no hostility or indeed interest anywhere else.

The teenage Yazid was polite, shy and apparently without ego. A 240-question personality test he completed at Cannes showed that he was highly motivated, had low self-esteem and never placed his own interests first. Zidane was a queen bee with the attitude of a worker. He joined Bordeaux in 1992, aged 20, the third man in a three-player transfer from Cannes. Salaries were lower then and he wasn’t yet an international (he debuted for France with two goals only aged 22, in 1994) so he led a relatively normal, non-celeb life into early adulthood.

Rolland Courbis, Bordeaux’s coach, renamed Yazid “Zizou” and his rise began. Returning to Cannes once for a dinner with friends, he spent the meal rolling down his left sleeve, embarrassed by his expensive watch, recounts his French biographer Jean Philippe. There has always been something defiantly uncool about Zidane. Most obviously, a vainer man would have fixed that bald spot.

Going into the France-Brazil World Cup final in 1998, he was 26 but still not a superstar. On matchday, France’s manager, Aime Jacquet, who had spotted Brazil’s slack marking on corners, advised him to “take a stroll towards the front post.” Zidane headed in two corners and France won 3-0. Afterwards he cried on the field and Enzo, seeing his daddy in tears, cried too.

That night may be postwar France’s happiest communal moment. It was also the first time many French people were moved by soccer. In a country that discovered the game late, Zidane embodies French soccer history in a way that no one person can in Spain, England or Italy, nor even Franz Beckenbauer in Germany.

After France won Euro 2000, Zidane was voted France’s most respected person in the Journal du Dimanche newspaper’s regular poll. He has since won the award five more times yet such acclaim didn’t seem to change him. Lilian Thuram, his longstanding teammate with Les Bleus, believes that a key difference between the team of 1998 and previous France sides was that its star player was “very humble.”

“Zidane never throws a dirty look at a player who makes a bad pass,” Thuram said. “He never neglects to try to win the ball on the grounds that his name is Zidane.” And despite his thunderous shot, Zidane usually preferred to pass.

He will never be a man of words, or cuddly or witty, but over 25 years in French public life Zidane has shown himself wise and dignified. He doesn’t boast, blame or engage in controversies. As Nicolas Cantaloup, who mimicked his voice for the French satirical TV program Les Guignols, on which Zidane features as a not especially flattering puppet, explained it: “[Zidane] speaks very little, in a very low tone. So to imitate him, you have to accentuate that. Make him almost apologise for speaking. He’s difficult for an imitator to parody because he doesn’t have much asperity.”

Zidane’s most outspoken interventions have been in politics: before the elections of 2002 and 2017, he said the Front National did not “correspond to the values of France.” Otherwise, he rarely spoke. Yet on the field, where most modern players resemble robot bodybuilders, Zidane’s personality shone through.

Zidane often retaliated against dirty opponents, sometimes with well-placed head-butts. His sending-off in the last match he played, the World Cup final of 2006, was the 14th red card of his career. Whatever Italy’s defender Marco Materazzi may have said, it was surely Zidane’s frustration at the game that triggered the head-butt. Five minutes earlier, Zidane’s flying header had nearly won France the final. But as the game ticked on, his teammates Thierry Henry and Patrick Vieira limped off injured and Zidane’s own limited physique began to let him down. An all-too-human frustration overcame him.

Few of his compatriots seemed to blame him. William Gallas, France’s centre-back, said afterward: “It was his last World Cup and everybody wanted to win for him.” Not for France but for Zidane — but then they had come to seem almost the same thing. Leaving Berlin’s Olympic stadium, I ran into a French friend who waved away my commiserations on the defeat, saying, “It’s just a shame that Zidane should leave soccer like that.”

That summer, a festive song called Coup de boule (Head-butt), recorded the day after the final and accompanied by a predictable dance routine, topped the French charts.

In retirement, Zidane was often favorably contrasted with a sullen new generation of Les Bleus — notably Nicolas Anelka, Samir Nasri and Patrice Evra. Zizou’s team would never have gone on strike at a World Cup as the team did in 2010. Meanwhile Zidane seemed to have found his sporting home outside France, in Madrid. He moved there in 2000 after the club’s president Florentino Perez, scrawled on a serviette in bad French at a UEFA gala in Monaco: “Do you want to play for Real?” The serviette was passed to Zidane at a neighboring table, who scrawled back: “Yes.”

Juventus had never quite become his club. Unlike many pros, Zidane continued to love soccer whereas Juve loved winning. In the Turin restaurant where the team ate on Sunday nights after matches, Zidane would gaze transfixed at a match on TV, oblivious to the spaghetti hanging from his mouth. His style was made for Madrid. Whenever he got the ball in the Bernabeu, Alfredo Di Stefano, Real’s star of the 1950s, would lean forward in his seat and murmur, “Vamos, maestro!”

In Madrid, Real’s former sporting director Predrag Mijatovic noted that Zidane “has become part of the house.” Zidane has won glory there as a player and coach — two completed seasons on the bench, two Champions Leagues — but also in the unglamorous roles of adviser to Perez, assistant coach and coach of the reserves. He and his wife Veronique have raised their four children in Madrid. (Enzo, 22, now plays in midfield for Swiss club Lausanne-Sport.) Though French fans wish he would come home, ideally to coach Les Bleus, Zidane — unlike many other French players — has avoided the tag of footloose mercenary.

Even amid this difficult season, with Real 15 points behind Barca in the league, the Bernabeu hasn’t whistled him. The crowd respects him too much and appreciates his refusal to blame others for defeats unlike certain other coaches they can recall.

Zidane flies back to Paris this week as a national treasure, part of the familiar furniture of French people’s lives. In an often angrily divided country, he is a rare unifying figure.

Simon Kuper is a contributor to ESPN FC and co-author, with Stefan Szymanski, of Soccernomics.