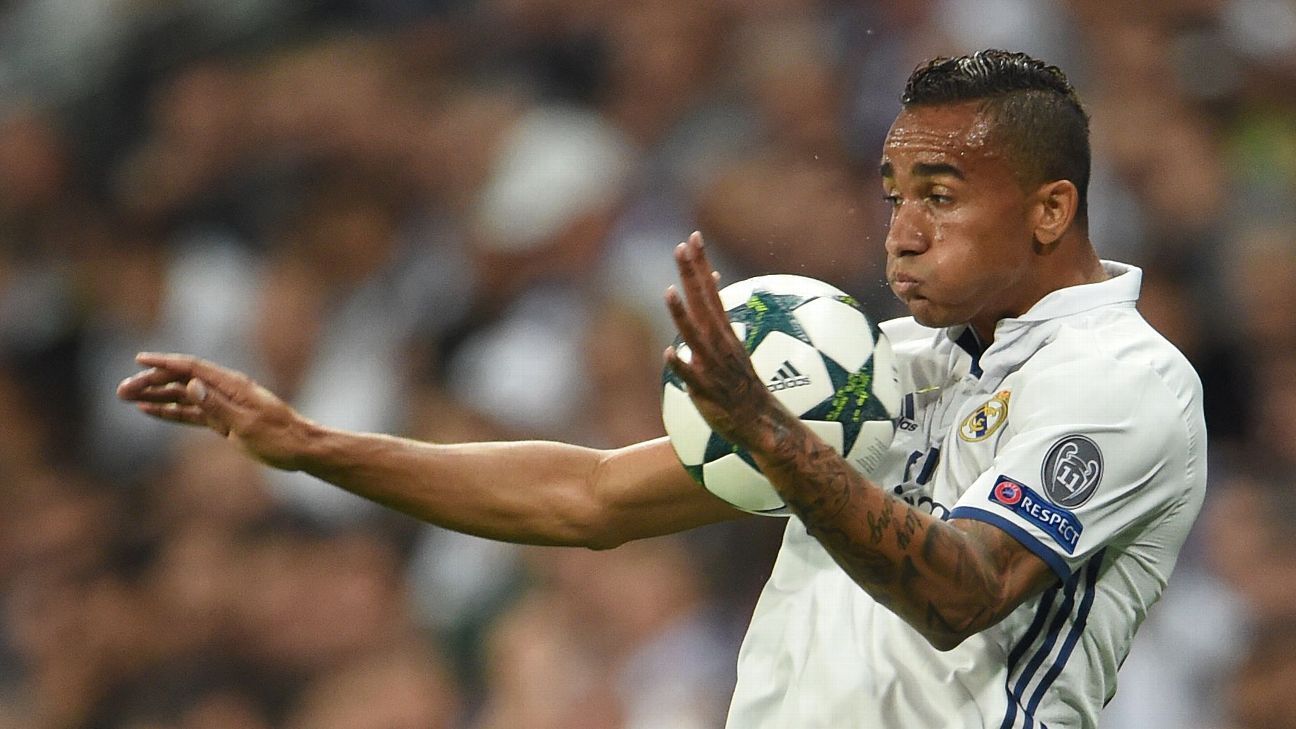 
Real Madrid coach Zinedine Zidane has suggested he would like to strengthen his squad before the season starts, while confirming that right-back Danilo has left ahead of completing a €30 million move to Manchester City.

Sources told ESPN FC on Friday that Manchester City hoped to complete Danilo’s signing before the the two clubs meet in the International Champions Cup on Wednesday, and Zidane confirmed the move was on the cards.

Speaking at a news conference at UCLA ahead of Sunday’s first ICC game against Manchester United at Santa Clara’s Levis Stadium, the Los Blancos coach said that he always wanted to improve his squad and was keeping a close eye on the market.

“We are always considering the market,” Zidane said. “Danilo is gone now, Alvaro too. I am not saying we lack a forward. [But] we have one less than last season, but we will see how we manage that. We have to see what we can do.

“The players who have left are very good. And some other young players are coming in. But we always try and improve the squad.”

Through the summer Madrid have been linked with big money moves for players including Monaco’s €130 million rated starlet Kylian Mbappe. Asked for his views on his fellow Frenchman, Zidane was cautious with his words.

“There are always debates, but we are here now with 28 players,” he said. “So that is what I am thinking about. Later anything can happen until the 31st of August. He is a good player, interests many clubs, but for me at the moment I am thinking about my players for tomorrow’s game, and preparing the season.

“Borja [Mayoral] is with us, Cristiano [Ronaldo] will come back, and until Aug. 31 anything can happen.”

Ronaldo is currently on a personal promotional trip to the Far East, and has yet to speak publicly about his future, having let it be known earlier in the summer that he wanted to leave Spain in response to be called to court to answer charges of a €14.7 million tax fraud.

Zidane told ESPN FC earlier this week he was confident Ronaldo would stay, and said on Saturday that he expected to see the Portugal international upon the squad’s return to Europe.

“There has been a lot of talk about Cristiano wanting to leave,” he said. “I just believe what he says himself. He is on holidays, is relaxing. I see everything, listen to everything, but I believe on Aug. 5 he will be with us. When he arrives we will see when he is ready to play, but it will be soon enough.”

Club president Florentino Perez arrived in L.A. on Friday night, accompanying new signing Ceballos and his Spain under-21 colleagues Marco Asensio, Jesus Vallejo, Borja Mayoral and Marcos Llorente, who were all joining up with the squad after playing in the European Under-21 Championship.

Zidane suggested all of the players who have been training in L.A. since July 11 would get a run out in Sunday’s game against a United side who were further along in their preseason preparations.

“We are happy to begin our work,” he said. “They have been now 10 days training and the players want to play. So this game comes at a good time for us, it is our first game, [United] have had four or five. All the players are going to get minutes.

“The first game I do not expect too much, I hope nobody gets injured, and we play a good game. The result for me is not so important.”