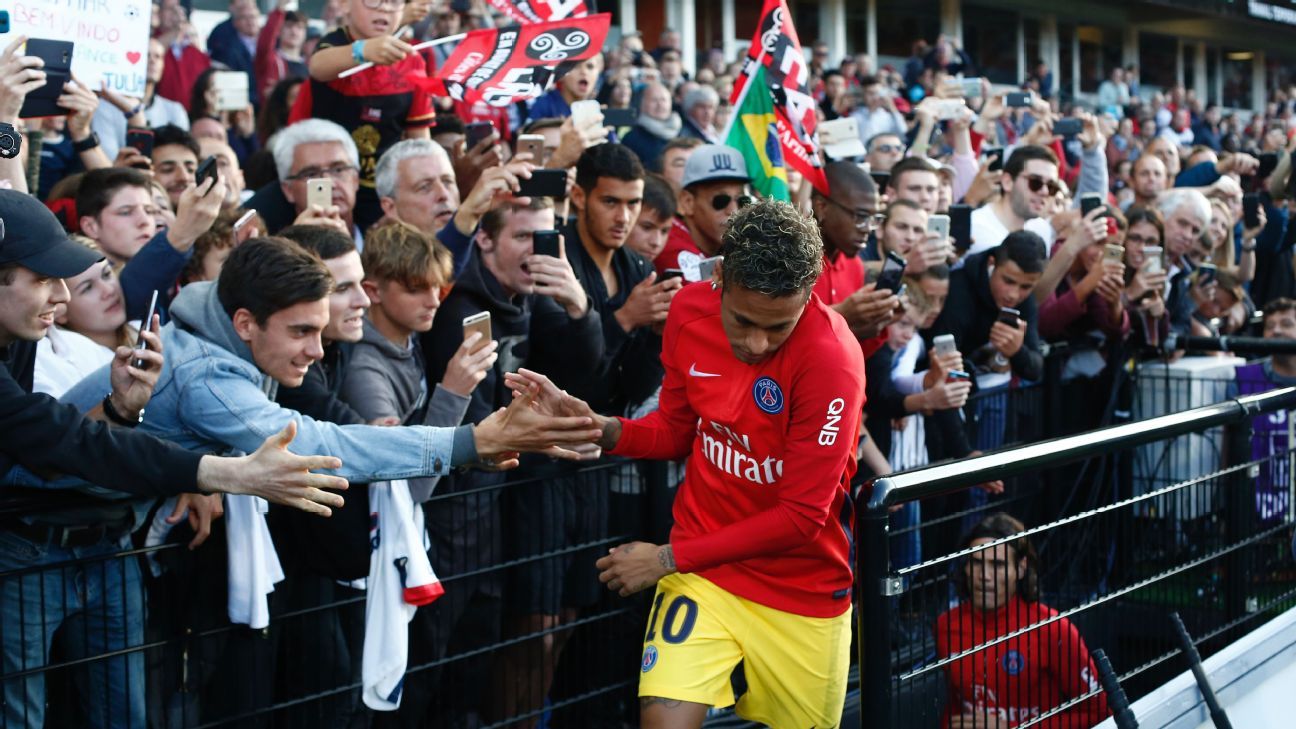 
GUINGAMP, France — Driving past Guingamp a few hours before Neymar made his Paris Saint-Germain debut in front of a bursting Stade de Roudourou and 1.25 million viewers on French television channel Canal+, I spied a goat resting in the summer heat on top of a small shed and could not help but smile at the irony.

The image reminded me of all of the comments that had been made about the Brazilian superstar’s first Ligue 1 opponents, modest En Avant de Guingamp, and how they allegedly represent the “farmer’s league” that is the French top flight.

There was no avoiding it — the commune of Guingamp in the department of Cotes-d’Armor is literally a farming community for the most part.

Instead of simply accepting such accusations or aggressively railing against them, though, Les Guingampais — with a strong dose of good humour — decided to embrace their agricultural image and played up to all of the stereotypes many non-French viewers had of them prior to Neymar’s debut on Sunday night.

The Guingamp supporters’ fantastic sense of humour was evident during the first half when they hoisted a banner reading “Neymar = 44.4m pints. Nasser, it is your round!”

Although the PSG man was the centre of attention all night and grew into his first 45 minutes in French football before taking over the second, the home fans had arguably been the best value of all at the midway point of the encounter.

However, while this welcome banter was deliberate recognition of their parochial reputation up against their illustrious visitors from the capital, there were other, more genuine, examples of the unprecedented scale of the event that unfolded at the cosy Roudourou venue.

Hours before the home crowd were allowed into the stadium, they were waiting excitedly outside to get a glimpse of Neymar when he and the rest of Unai Emery’s expensively assembled squad arrived for the match.

Afterwards, many of those same faces queued and then clamoured for autographs before declaring that they had just seen “the best player to ever grace Guingamp”, despite the fact that the likes of Zlatan Ibrahimovic, as well as compatriots Ronaldinho, Rai and Leonardo had trodden the Roudourou turf and impressed before Neymar.

The media circus that had assembled for the event could barely be contained in the press box, which holds a maximum of 78 people. 120 registered French journalists alone applied for accreditation for the momentous occasion, while many more from further afield also needed accommodating — somehow everybody managed to squeeze into the sardine tin-like press area.

To emphasise the strength of the collective over the individual that was Guingamp’s mantra under talented young coach Jocelyn Gourvennec and has remained prominent in their philosophy under former PSG coach Antoine Kombouare, the home side emerged for their warm up with the No. 10 on the backs of their shirts.

That togetherness served Guingamp well until seven minutes into the second half, when Jordan Ikoko — a PSG youth academy graduate – scored in his own net in comical fashion with Neymar involved in the build-up.

After that, it turned from a contest into a spectacle for the home fans and they were treated to two moments of magic from the Brazil international and another expensive name — Edinson Cavani.

The South American pair combined beautifully to carve open the Bretons’ defence and Neymar deservedly finished the game with the man of the match award — no easy feat in such a banana skin of a debut.

Neymar will be expected to produce similar — at least — on a weekly basis from now on and Guingamp and their fans can rest assured that they will not be the only ones on the receiving end of a masterclass from the man from Mogi das Cruzes.

However, they can and will pride themselves on the fact that they were the first to come up against arguably the biggest star Ligue 1 has ever seen and did his maiden appearance justice by creating a colourful and vibrant atmosphere to complement an entertaining and fascinating football match.