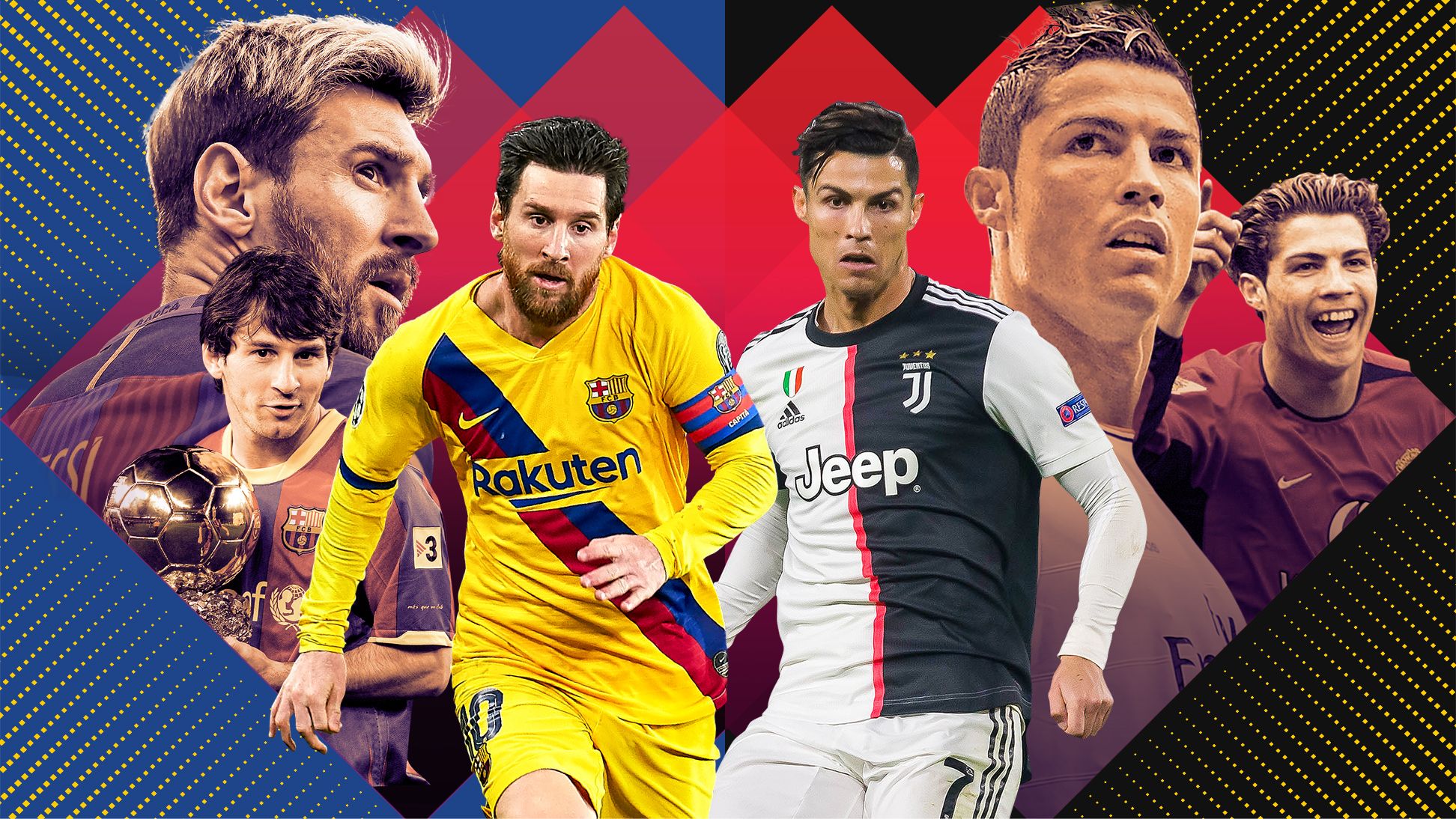 
Cristiano Ronaldo vs. Lionel Messi has been a battle for the ages. It’s European vs. South American; Argentinian against Portuguese; a 6-foot-2 athlete blessed with Terminator-like remorselessness and ruthless technique pitted against a 5-foot-7, instinctive genius of juvenile physique; power, precision and pride vs. impish eruptions of intuitive invention.

If you’ve been ferociously caught up in taking sides between Ronaldo and Messi, big-upping one while trying to belittle and diminish the other instead of luxuriating in one of the all-time great sporting rivalries, then shame on you. And if you have been, perhaps you haven’t noticed recently that Father Time, stealthily and pitilessly, has entered the fray to suddenly make it a three-way battle.

Happily for all of us, it hasn’t been the personal rivalry, not by any stretch, that has driven Ronaldo and Messi. Yes, each has felt the other’s presence and hated the sensation of someone else occupying their throne if they vacate it for an instant — you know, the deeply uncomfortable feeling that someone else left the seat cushion moulded to their shape and a little warmer than you’d have wanted it. But have no doubt: Ronaldo and Messi have maxed out their respective inherent greatness for the past decade-and-a-half because they ache for the great team trophies: the World Cup, respective continental crowns, domestic leagues and, perhaps because it beckons alluringly every season instead of every four years, the Champions League.

This competition, which restarts Friday, has become the blue ribbon to denote football greatness. Is it feasible that, given their ages (Messi 33 and Ronaldo 35), we’ve already seen the last of their Champions League dominance? (And almost total dominance it has been.)

In the past 14 editions of the greatest club competition, since Liverpool beat AC Milan on penalties in Istanbul in 2005, Messi and Ronaldo have won the final, scored in the final or helped propel their team into the final on nine occasions. Between them, they have nine winner’s medals: Ronaldo with five, Messi with four, though because of injury, he played in only three of them. Between these two monsters of the modern game — indeed, of modern sport — they have scored 242 times in this competition (128 for Ronaldo, 114 for Messi).

– Stream FC Daily seven days a week on ESPN+ (U.S. only)
– Missed anything? Latest from Europe’s top leagues
– Champions League ’20-21 kicks off this weekend! Wait, what?

They believe in taking matters into their own hands. You have to combine the next four on the all-time list to overtake the goal total of Messi and Ronaldo: Raul (71), Karim Benzema (64), Robert Lewandowski (64) and Ruud van Nistelrooy (56).

Records, just like finals and medals, have fallen around these two like confetti. These are just a handful:

I admit that you could deploy persuasive, up-to-date statistics to try to blow out of the water any idea that we won’t see Ronaldo or Messi in the next five finals in Lisbon, Istanbul, Saint Petersburg, Munich or London. For example, Ronaldo has often talked about having not only a durable physique but also an equally robust mentality.

“OK, when I was starting out, I imagined that by 35, I’d be retired and fishing in Madeira,” he said recently. “All this that I’ve achieved didn’t really pass through my brain back then.

“I could quit in a season’s time, or I could play until I’m 40 or 41. Everything depends on how I feel, my motivation. Because physically, it’s never going to be a problem. I look after myself really well, and I’m quite certain that I could play until I was over 40. It won’t last forever, but I feel strong enough to go on winning important trophies.” His central theme is emphasised by the fact that he not only has been Juventus‘s key player in retaining Serie A (again) at an age when the original Ronaldo, Zinedine Zidane and Kaka were all retired, but also has scored 35 times in all competitions this season.

– Marcotti: Messi’s evolution from understudy to G.O.A.T.
– Marcotti: How Ronaldo changed from Manchester to Turin

Messi? Well, he has lifted no trophies so far in 2019-20, a predicament he’s suffered only once in his career. By that, of course, I mean club trophies, given that he lifted his sixth Ballon d’Or in November. Barcelona‘s in-house genius has carried his failing team with a grand total of 30 goals and 26 assists. Genuinely remarkable.

I remember the first time the Champions League really disappointed Messi. It was in 2005-06. I interviewed him in the summer of 2006 and asked him about losing his temper after not being used by Frank Rijkaard in the Paris final, a game he helped his team reach but was judged insufficiently match-fit to perform in. Post-match, encouraged by the senior players to join in hugging the trophy on the pitch, Messi stomped off in a fuzz of impotent fury. He felt ill-treated by his Dutch coach, though he later repented, admitting his temper had been unleashed immaturely.

“God willing,” he told me, “I’ll reach another final and win it.”

He did, scoring in two of them, completing two trophy trebles by winning in Rome and Berlin, and starring in what some consider the most aesthetically beautiful display of football in a European Cup final: Wembley 2011.

Frank Leboeuf explains the reasons why to not count Real Madrid out of their UCL tie with Man City just yet.

Fourteen years later, the ache is back. After Barcelona’s penultimate match in La Liga this season, Messi, knowing that defeat at home to 10-man Osasuna guaranteed that Real Madrid were crowned champions, said: “For much of this season, we’ve been inconsistent, weak, beaten by teams which were hungrier or more intense than us. Opposition have found it easy to create danger and score against us.

“I’ve already pointed out that if we carry on like this, it’ll be very difficult to win the Champions League. In fact if we do want that trophy, then we’ll have to improve radically. If not, we can lose at home to Napoli and go out. It’s good that we have a break, that the Champions League is now a competition which we start from zero and which can be won in just four matches. But we simply have to improve, significantly, and be unsparing in our self-criticism.”

It was a rallying call, but not the words of a captain who is sure that his team can beat Napoli, (likely) Bayern Munich, (probably) Manchester City and (perhaps) Atletico Madrid.

There is another scenario, of course.

That we’ll ever be lucky enough — like in 2009, when Barcelona beat Manchester United — to see a final featuring Messi and Ronaldo going head-to-head seems to me a little unlikely. It’s never impossible, but there are steeply diminishing odds. Nor can it happen this season. The UEFA draw has seen to that. However, should Barcelona eliminate Gennaro Gattuso’s Napoli and Juventus deal with Lyon, we’d be within touching distance of Ronaldo and Messi facing off in a Champions League semifinal for the first time in nine years. Yes, it would require two significant quarterfinal upsets: Juve knocking out Pep Guardiola’s Man City or Real Madrid and Messi driving flimsy Barcelona past mighty Bayern Munich.

But a repeat of 2011? Boy, what an explosive tie that was: Barcelona 3-1 Real Madrid featuring Messi’s greatest goal, Ronaldo’s utter frustration at Jose Mourinho’s nullifying tactics, and more controversy than you’d normally find in an entire season.

Ronaldo vs. Messi, Juventus vs. Barcelona, Aug. 19, Estadio Jose Alvalade, Lisbon. Would you sign for it now? Do you think, despite significant odds against, that it could happen? If it doesn’t, do you reckon we’ll ever witness these two all-time greats, who’ve tussled for the Champions League like Paul Newman and Robert Redford energetically tussled for Katharine Ross in “Butch Cassidy and the Sundance Kid,” going head-to-head in the later stages of this beautiful competition again?

We can only pray.