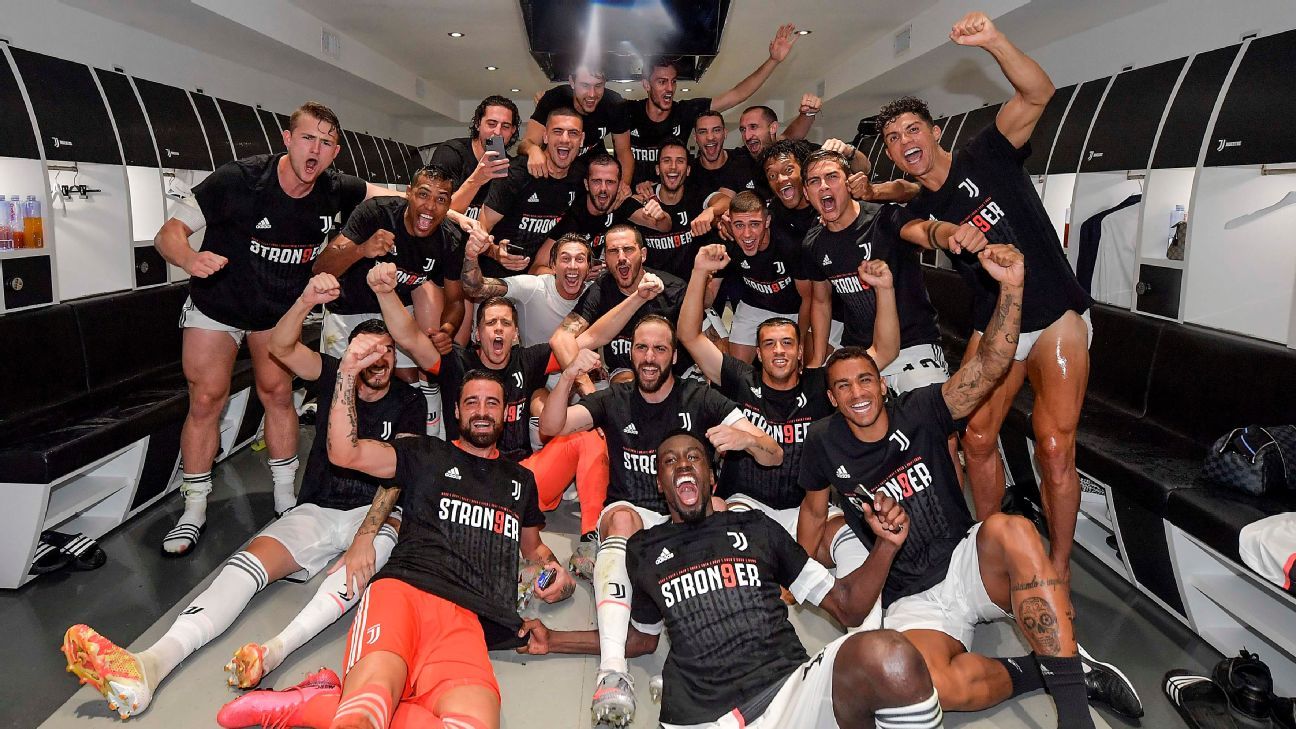 
A 2-0 victory over Sampdoria on Sunday earned Juventus a ninth consecutive Serie A title, but it hasn’t been a vintage season with six defeats so far — their most since the 2010-11 campaign, when they finished seventh. They followed up their title-winning victory with a 2-0 reverse at Cagliari and defeat at home to Roma on the final day of the campaign would mean their lowest points total in any of their recent title-winning seasons on 83.

Maurizio Sarri’s side have failed to win five of their 11 matches since the restart and, having gone into the coronavirus stoppage just a point ahead of Lazio, had any of their rivals found consistent form, the outcome of the Scudetto may have been different. However, does this give other teams hope they can stop Juventus making it 10 in a row next term?

Juve will still be the team to beat next season, despite a far from spectacular campaign in which they suffered far too many defeats. They have more spending power and are well-placed to improve next season. An important missing element is the Jorginho-shaped hole in the midfield to knit play together, but the arrival of Arthur from Barcelona will give Sarri the playmaker he’s lacked; it could be key in finally seeing the passing style that dazzled Serie A during his time as Napoli manager. Jorginho helped connect defence and attack with short, quick passes for Sarri, an important element in his playing philosophy.

At the back, after a tricky start to life in Italy, Matthijs de Ligt ended the campaign as arguably Juve’s best defender, while fellow promising centre-back Merih Demiral will also be available following a long-term knee injury. Paulo Dybala was sensational this season after it looked like he could be surplus to requirements, while Cristiano Ronaldo continues to defy age with his scoring feats — he has 31 in Serie A so far with one round of matches remaining. Adrien Rabiot has also been one of the club’s best performers since the restart.

But Juve’s rivals do have some cause for optimism. Juventus desperately need to bring down the average age of their squad, something that won’t be helped following the contract extensions for Gianluigi Buffon, 42, and Giorgio Chiellini, 35. There’s also the continued adjustment issues as Sarri tries to imprint his identity on this side.

How are their rivals placed for next season, and who will realistically contend for top honours?

Inter’s key issue will always be their mentality. Known as “Pazza Inter” (“Wacky Inter”), they will have to overcome their natural impulse to implode at any given moment and maintain consistency if they’re ever to mount a real title challenge.

Overall, Antonio Conte will be disappointed with his first season at Inter. He was supposed to bring a steeliness to the side, but they produced bizarre results such as their 2-1 home defeat to 10-man Bologna when leading 1-0, and they contrived to throw away a lot of needless points. One strength is their financial power when compared to many the other teams in Serie A, though they are still way behind Juve in that regard and will continue to be until they make a dent in the Champions League, where Inter have failed to reach the knockout stages of the competition since 2012.

Still, the Nerazzurri do have money to spend — as proven by their €40 million purchase of Achraf Hakimi from Real Madrid.

One big question mark is the future of Barcelona target Lautaro Martinez, who was superb before the break but less impressive since the return. If Barca pay his €110m release clause, Inter would be powerless to stop the move. Romelu Lukaku‘s 29 goals in all competitions this term is a very good return and Alexis Sanchez has also stepped up significantly since the restart, but Martinez was often the ideal foil for Lukaku in the Inter attack.

Inter look best-placed to challenge next season, but they have an important summer and will need to find consistency and reliability if they are to get anywhere near Juve.

Who knows where they would be now if they hadn’t dropped so many needless points earlier in the season? Unbeaten since the restart, they are the form team in Serie A.

Atalanta are difficult to really pin down given that they are essentially a team of misfits, who failed to show their best elsewhere and are just excelling here. Even manager Gian Piero Gasperini was sacked early on in his spell in charge of Inter in 2011.

They don’t really have any superstars for bigger teams will pick off in the transfer market, meaning there’s a strong chance that the core of this team will be together again next season. But they just seem so fearless. Once they get their head around what is required, they are relentless. One point from their first four Champions League matches was followed by four wins and 13 goals on their way to a quarterfinal date with Paris Saint-Germain on August 12.

They have scored 98 league goals — 19 more than next-best Inter — and are now an attractive destination for players, thanks to regular Champions League football and Gasperini’s ability to get the very best out of his players. The downside might be maintaining this pace: Atalanta’s players have basically been at their top level, form-wise, for two straight seasons. Surely they can’t keep this up for a third?

They also aren’t a young team — Alejandro “Papu” Gomez, their talisman, is already 32 — and Gasperini’s high-energy style may prove more difficult with the players a year older next season.

Stewart Robson outlines why Atalanta’s defense will be relieved that Kylian Mbappe will be out for PSG.

The coronavirus stoppage came at the most inopportune time for Lazio. The momentum was with them; despite having a thin squad, early exits from the Europa League and Coppa Italia meant they could focus solely on the league. They’d been unbeaten for 21 matches straight and were a point behind Juve in mid-March, but a raft of injuries really hampered them, along with losing the advantage of having fewer games per week, and Simone Inzaghi’s side just fell apart, losing five of 11 matches since Serie A resumed.

There really is the sense this was their chance and they let it slip. Likely to lose Sergej Milinkovic-Savic in the summer transfer window, with Paris Saint-Germain among the teams interested, and Ciro Immobile surely unable to keep up his incredible goal scoring numbers — he has 35 goals in 36 matches so far this season — you have to think the only way for Lazio is down.

They are back in the Champions League and manager Simone Inzaghi has shown he can overachieve with what he has, but they would do well to finish in the top four again next term.

It’s difficult to have any idea what Roma are until their takeover is complete — if it is ever done. The Friedkin group had almost tied up a deal before the coronavirus pandemic occurred, and now it’s unclear what will happen.

That uncertainty also informs how they look on the pitch. In Serie A, they’ve been streaky all season. At times, they look the real deal while at others, a total shell of themselves. Roma have a young team, with top, individual talent and a good manager in Paulo Fonseca, but they need to find the style and tactics that get the best out of their players.

Having superstar Nicolo Zaniolo back fit, following a long-term knee injury, and likely to stay at the club is huge, but Fonseca needs to play Bryan Cristante in his best position to get him back to the form he showed at Atalanta.

Few teams in world football have a bigger gap between expectation and reality than Roma, where they demand the title every season despite having only ever won it three times in club history. But, after two seasons outside of the top four, supporters would surely settle to get back in the Champions League next season.

In total disarray over the first half of the season, Milan have been (along with Atalanta) the form team after the coronavirus break.

Buoyed by the January arrival of 38-year-old Zlatan Ibrahimovic, who has really galvanised the squad, Milan showed their top-tier credentials with a stunning 4-2 victory over Juventus, having been trailing 2-0 with 28 minutes remaining earlier this month. They also looked set to appoint Ralf Rangnick in the summer, but an incredible upturn in form has seen them put their faith instead in Stefano Pioli, who was only appointed mid-season.

Marcotti: Why Milan stuck with Pioli

This young team has some serious potential, but a title challenge seems a long way away yet. Milan have not been in the Champions League since 2014; getting back into the competition they have won seven times is still their main priority. Milan fans need to keep things in perspective and maintain realistic expectations. Yes, they are playing well, but Juventus are way ahead and it’s a slow climb to get back to where they were. At least they finally seem to be going in the right direction.

At the beginning of this season, then-manager Carlo Ancelotti said second place was “no longer good enough.” Fast forward three months and the Italian was out of a job, with Napoli languishing in mid-table after a squad mutiny that ended with the entire first team getting fined by owner Aurelio De Laurentiis for refusing to go on a club retreat. The appointment of Gennaro Gattuso was initially seen as a money-saving decision, but after a difficult start, the former Milan midfielder has got the side playing well again and won the first trophy of his managerial career when he led Napoli to victory over Juventus in the Coppa Italia.

Success in this season’s Champions League — albeit unlikely — is their only potential avenue back in the competition next season, but they do have money in reserve and sources have told ESPN they are confident they’ve won the race to sign Lille duo Victor Osimhen and Gabriel for a combined price of €100m. However, going from sixth to first would be a huge jump for any team and, like Roma, Napoli will likely be content with just returning to the Champions League.

Question marks remain over the futures of Kalidou Koulibaly, Allan and Arkadiusz Milik as the transfer market opens; if any or all of them do depart, it that could signal a transitional ahead for the Neapolitans.

With the right managerial appointment, a team like Fiorentina have the basis to mount a potential top-four challenge. Though it seems star winger Federico Chiesa will leave this summer, with Inter and Juve keen on his services,, they still have Franck Ribery as well as the highly promising Nikola Milenkkovic in defence and Dusan Vlahovic in attack to form a competitive spine. Sofyan Amrabat has been sensational in his loan spell at Verona and will be a huge addition when he returns, while there is surely more to come from Erik Pulgar. With U.S. owner Rocco Commisso heavily committed to the project, there is a platform there for a decent vault up the table.

Elsewhere, Sassuolo are the best of the rest in the standings, partly down to highly-rated manager, Roberto De Zerbi, who has created an impressive frontline with Domenico Berardi, Jeremie Boga and Francesco Caputo all firing.

Ultimately, if Juve can’t find an identity or feel that Sarri is the wrong man in charge, Inter may be most likely to catch them, though that would rely on Conte finding some real consistency and a winning mentality that looks unlikely based on this season. In short, Juve should be well-set for the perfect 10 in 2020-21.