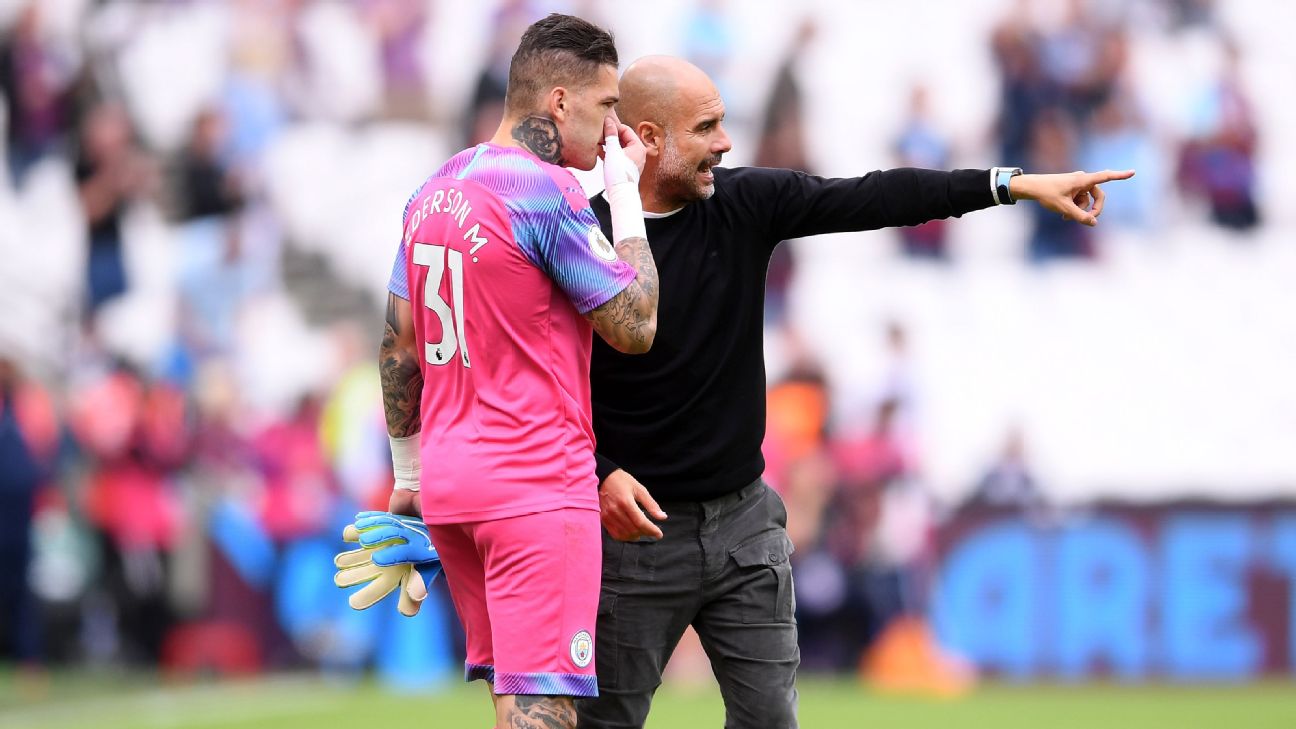 
“Playing out from the back,” the principle whereby teams begin passing moves from deep in their defensive third, has become increasingly popular but has yielded mixed results.

There is risk attached to adopting the tactic, particularly against teams that are using a high intensity pressing game to nullify it, but there are myriad tactical reasons why playing out from the back can be advantageous.

The main — and most important — is to produce a better quality of service into front players. For years, particularly in England, forwards fought to gain possession of passes hit toward them from some 60 yards away. It is much easier for front players to receive passes and make better runs when balls are played into them from shorter distances.

Starting moves from deep also allows teams to make the pitch “bigger.” Coaches have long used that term in relation to width, but with players dropping so far to receive the ball from their goalkeeper, as well as strikers threatening space behind opposing defenders, making the pitch “big” is equally applicable to length. This makes it more difficult for defending sides to remain compact.

A further benefit is that teams are able to dictate the flow of the game and dominate possession, whether changing points of attack with switches of play or being more penetrative with forward passing. There is also the chance to draw in the opposition, then play beyond pressure and use space between their midfield and defenders. Tottenham, for example, achieved this several times in the first half against Arsenal recently.

There are two ways to play out from the back. The first, more obvious method is to pass through defensive lines. Under Frank Lampard, Chelsea have gone from back to front via their midfield with relative ease, particularly in the first half against Manchester United on the opening weekend of the season.

The second sees a defender break out with the ball, which creates a numerical advantage in midfield and unbalances the opposition’s defensive shape. Manchester United’s Harry Maguire exploits the space in front of him better than any other player, but can only do so if the midfielders ahead of him clear a path.

But is playing out from the back for everyone? Too many teams and, more importantly, managers, find it difficult and I am not convinced that all are entirely on board with the reasons for adopting this tactic. Because when it goes wrong, the effect can be disastrous.

Take Arsenal as an example. Earlier this season against Burnley, who were set up to stop the Gunners having easy possession from goal kicks, they continually gave the ball away in dangerous areas, and, on Sunday, conceded against Watford following a similar lapse, which proved manager Unai Emery had not learned anything. Will he continue to use this method in future matches?

Players are equally culpable. Some goalkeepers, including Hugo Lloris of Tottenham and Arsenal’s Bernd Leno, do not have the ability or decision-making skills to always pick the right pass, while midfield players drop too deep and in doing so, clog space that is needed to play out.

Meanwhile, many centre-backs fail to recognise opportunities to run with the ball into space and the same defenders will also pass to their full-backs, who have no other option but to pass back to the goalkeeper, defeating the object of trying to attack from the back.

The most common fault, though, occurs when the chance has been created to be penetrative and cut through the opponents’ defensive lines, only for players to turn away, preferring to keep possession by passing square or backward. Think of Tottenham’s performance against Liverpool in the Champions League final.

The best team at playing out from the back — their defeat to Norwich notwithstanding — is Manchester City. When Pep Guardiola took over as manager, he had a clear vision of what was needed to be successful and central to that was a goalkeeper who excelled with the ball at his feet.

As such, Guardiola replaced Joe Hart first with Claudio Bravo, who was good in possession but made too many mistakes in other areas of his game, and then with Ederson, who is probably the best goalkeeper in the world when receiving back passes.

Even if the opposition push players high up the pitch to match City numerically, Ederson becomes a spare player and his range of passing is vast. If under pressure, he can go long into his front players or behind the opponents’ defence — he set up goals last season for Sergio Aguero and Raheem Sterling with long clearances — and the Brazilian’s decision-making is almost flawless.

But while it is true that you need good players, the most important aspect of playing out from the back is the manager’s ability to understand how to create space and, by doing so in different ways, this is where Guardiola is at his best:

– When midfield players vacate the central area, passing avenues into front players are created.
– Emptying the same area allows full-backs to receive the ball unchallenged when they make a run into central midfield.
– By pushing full-backs infield at the right time, central defenders have clear passing routes into attacking wide players.
– Defenders have the option, when they are closed down in possession, to play beyond that pressure to a front three that know where the ball is going to be played.

By understanding how to create space and what they are trying to achieve, allied to decision-making, rarely do City look as though they are taking risks when starting moves from deep. Yet the mistakes against Norwich, particularly the third goal where Nicolas Otamendi was not aware he was being closed down, shows the need for precision and concentration.