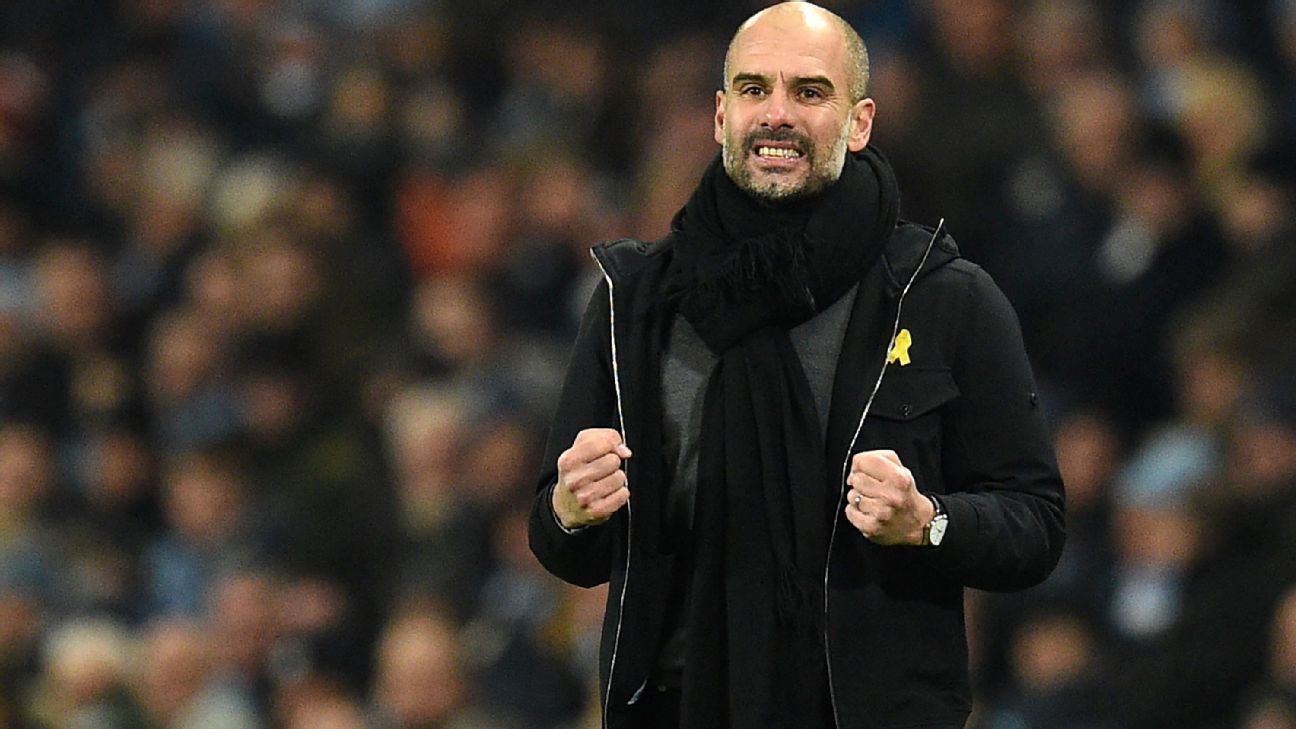 
A Champions League double-header sandwiched by a crucial league game, a derby against a team determined to upset his side’s path to glory, Jose Mourinho’s news conferences a distraction to what his side are doing on the pitch… Pep Guardiola has seen all this before.

Thanks to an early exit from the FA Cup, the Manchester City manager is midway through a three-week break from action before returning to a fortnight of football that will go a long way to defining his club’s season.

On March 31, he begins with a trip to Everton — a team that Guardiola has failed to beat in three attempts and the scene of that disastrous 4-0 defeat in January 2017 which was among the worst he has ever suffered as a coach.

Four days later they return to Merseyside for the first leg of their Champions League quarterfinal against Liverpool — the only team to beat them in the Premier League this season — followed by the Manchester derby at the Etihad Stadium, which could be a potential title-clincher. Three days after that it’s the second leg against Liverpool.

Four intense, raucous north-west derbies with a huge prize for Guardiola’s side if they can get through it. But for the Catalan, it’s exactly the sort of run of fixtures that he will revel in — a reward for the hard work done in the opening six months of the season and an opportunity to add to his incredible personal record of success after a surprising first campaign without a trophy.

While it’s a schedule that would leave many fans in a cold sweat, Guardiola has survived far worse before, during an intense three-week spell during his time at Barcelona.

Back in 2011, towards the end of the season, he faced four matches against Jose Mourinho’s Real Madrid — in the Spanish Cup, La Liga and Champions League, along with a league derby at city rivals Espanyol. And it was all conducted in an acrid atmosphere of rancour when Mourinho made his rivalry with Guardiola a personal war.

This time, Mourinho is only a bit-part player as Guardiola will instead focus mainly on his battle with Jurgen Klopp — a far more pleasant and respectful rivalry when they were on opposite sides at Bayern Munich and Borussia Dortmund.

Mourinho will be desperate to stop the humiliation of watching City secure the title with a derby victory against his United team at the Etihad, but the Portuguese has other targets in his crosshairs with his side dumped out of Europe and 16 points behind in the title race. Mourinho’s news conferences remain box office but are now focusing on his own dressing room rather than calculated attacks on rivals in a bid to destabilise them.

It was very different seven years ago when both managers were on an equal footing, with hopes of a La Liga title and securing a place in a Champions League final at Wembley at the end of the season at stake.

Their first meeting on April 16, 2011 was a Clasico at the Bernabeu with Real needing a win to cut Barca’s eight-point lead at the top of the table. After a 5-0 victory at Camp Nou earlier in the season, Mourinho reportedly let the grass grow longer in an attempt to stop Barca’s passing game. In the end, the game finished 1-1 with a tunnel brawl after the final whistle setting the scene for the three bad-tempered clashes to come.

Four days later Barcelona and Real met again in Valencia in the Copa del Rey final and in another tetchy clash of seven yellow cards and one red (Angel Di Maria), Real triumphed 1-0 thanks to Cristiano Ronaldo’s extra-time winner.

After a weekend away from each other, when Barca took a step closer to a title with a comfortable home win over Osasuna, the rivalry between the managers resumed in a Champions League semifinal. Mourinho launched a jibe at his opposite number claiming he pressured referees and Guardiola decided to make a tactical withdrawal from the row.

“In the press room, Mourinho is the f—ing chief, the f—ing boss,” he said before the game. “I try not to play the game off the pitch.”

On the pitch, tempers flared again. Mourinho, Real defender Pepe and Barca reserve keeper Jose Pinto were all sent off, but crucially the Blaugrana and Lionel Messi kept their cool to score twice for a 2-0 victory.

After Barca slipped up at Real Sociedad in the league, the fourth and final instalment of the Clasico ended 1-1 at the Nou Camp. It was another nasty affair with Mourinho suspended from the touchline but Guardiola had the last laugh declaring: “This has been one of the most beautiful nights I have ever lived.”

Five days later it was the Barcelona derby against Espanyol and Guardiola’s side moved to within a point of securing the title with a 2-0 home win. The title was sealed in the next game, a 1-1 draw with Levante and the Champions League trophy followed soon after with a 3-1 win over Man United at Wembley.

So Guardiola has certainly been here before. The City boss will enjoy his final few days away from football before being thrown back in a hectic two week of crucial matches, but he should be ready for anything after successfully navigating that onerous three weeks at Barca.