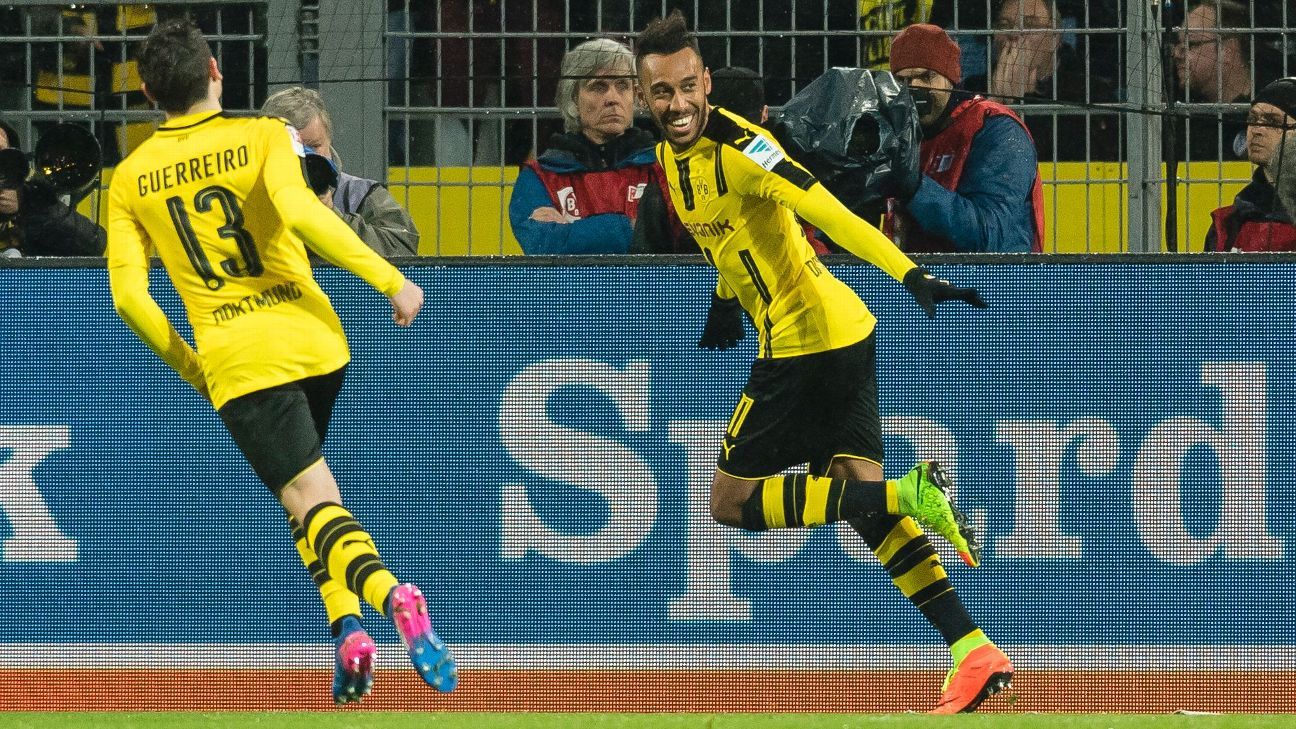 
Loud beats back up Wednesday’s Instagram video that shows how Pierre-Emerick Aubameyang steps into a private jet.

“Time to Comeback Home. See you next Time L.A,” the Borussia Dortmund striker wrote in the post. But what looks like a cutscene from “Grand Theft Auto” is just another day in the extravagant life of the 28-year-old Gabon international, and “Home” still means Dortmund — despite constant speculation surrounding the BVB star.

Aubameyang last season scored 31 league goals (causing former teammate Robert Lewandowski to throw a fit after he pipped him to the precious Torjagerkanone by one goal) and 40 times overall in 46 games across competitions. It was a solid encore to his 2015-16 season, where he netted 39 in 49.

All in all, Aubameyang has contributed a whopping 27 percent of BVB’s 292 goals over the past two seasons. Which raises three pressing questions:

“We’ll see. I will make a decision next week,” Aubameyang said in May after the final league match, forgetting there was still a cup final to be played. Four weeks down the line, however, a decision is yet to be announced. Rather it seems as though the decision has already been made for him.

For a while, Paris Saint-Germain seemed to be the hottest lead on where the quick forward is moving. But with sporting director Antero Henrique in place since June interest has cooled off significantly.

Henrique does not believe the Gabon international represents good value for money, a source close to the Ligue 1 giants told ESPNFC, and they are eying Monaco’s Kylian Mbappe instead. PSG coach Unai Emery mentioned that he preferred a more “conventional No. 9” when asked about the Dortmund forward.

The CIES Football Observatory research team has estimated a transfer value €81.5 million for last season’s Bundesliga top scorer, and with his contract still running until 2020, BVB are holding all the aces in their hand. According to reports the Ruhr side are not willing to let the striker go below an arguably still reasonable €70m price tag.

But the asking price for Aubameyang has seen interested clubs fold. Chinese Super League club Tianjin Quanjian are opting for Cologne’s Anthony Modeste instead, while Manchester City, Arsenal and Liverpool are not interested in opening their wallets, according to reports.

One reason Aubameyang’s chances to secure a big summer move have shrunk like bacon in the frying pan is his limitations as a footballer. That is harsh on the Gabonese international, but he cannot be rated as a world-class striker at the moment, even if he is not far from it.

As PSG’s Emery said, most clubs prefer a “conventional No. 9,” which Aubameyang is in many ways as he is a terrific poacher. However, if there is one quality is lacking, it is his hold-up play with his back towards goal. Keeping hold of the ball while teammates run into dangerous spaces has become an important trait for any top striker. Lewandowski, Karim Benzema and Mario Mandzukic have mastered this discipline.

Another reason is that clubs will often reach deep into their pockets for the promise of a guy developing into a world-class player. At 28, Aubameyang’s potential can be assessed a bit more realistically — and at this point, it may just not be promising enough for Europe’s elite clubs, as he’s not quite on a level with Luis Suarez or Gonzalo Higuain, who were older than 28 when they moved for fees beyond €70m.

All this being said, Aubameyang himself might also not be keen on a move away from the Westfalenstadion. With the market maybe not delivering the desired offer — he promised his grandfather he’d join Real Madrid — Aubameyang may add another year to his Dortmund career in the hope something better comes across in 2018. His next move will most likely mean his last big contract, and that ought to be planned with care.

2. Has he burned his bridges with BVB?

Aubameyang is respected in the dressing room and has assumed an important role helping to integrate youngsters such as Ousmane Dembele. Sport Bild reported on Wednesday that the club set an ultimatum for Aubameyang, who must find a home before the start of Dortmund’s summer training camp in Bad Ragaz, Switzerland, on July 28. There is little reason to assume the forward will cause a stir in public if he is to stay on.

3. Will he leave, and how would Dortmund cope if he did?

In this writer’s opinion, it is more likely Aubameyang stays on the Dortmund roster for another year. For the time being he has a good thing going at BVB, where he is fully integrated and does not have to compete for playing time. Besides, the Westphalians could block a transfer due to the lack of anyone else lined up.

After losing Henrikh Mkhitaryan, Mats Hummels and Ilkay Gundogan last summer, and in light of having to go through a transition on the managerial front, they may be reluctant to let another pillar of their team go.

If Aubameyang does end up leaving, it will be tough for the Black and Yellows to come up with a replacement of similar quality. They would target up-and-coming strikers to mould into stars, but while they have enough scoring outlets in their team, the absence of Aubameyang would most likely be felt.