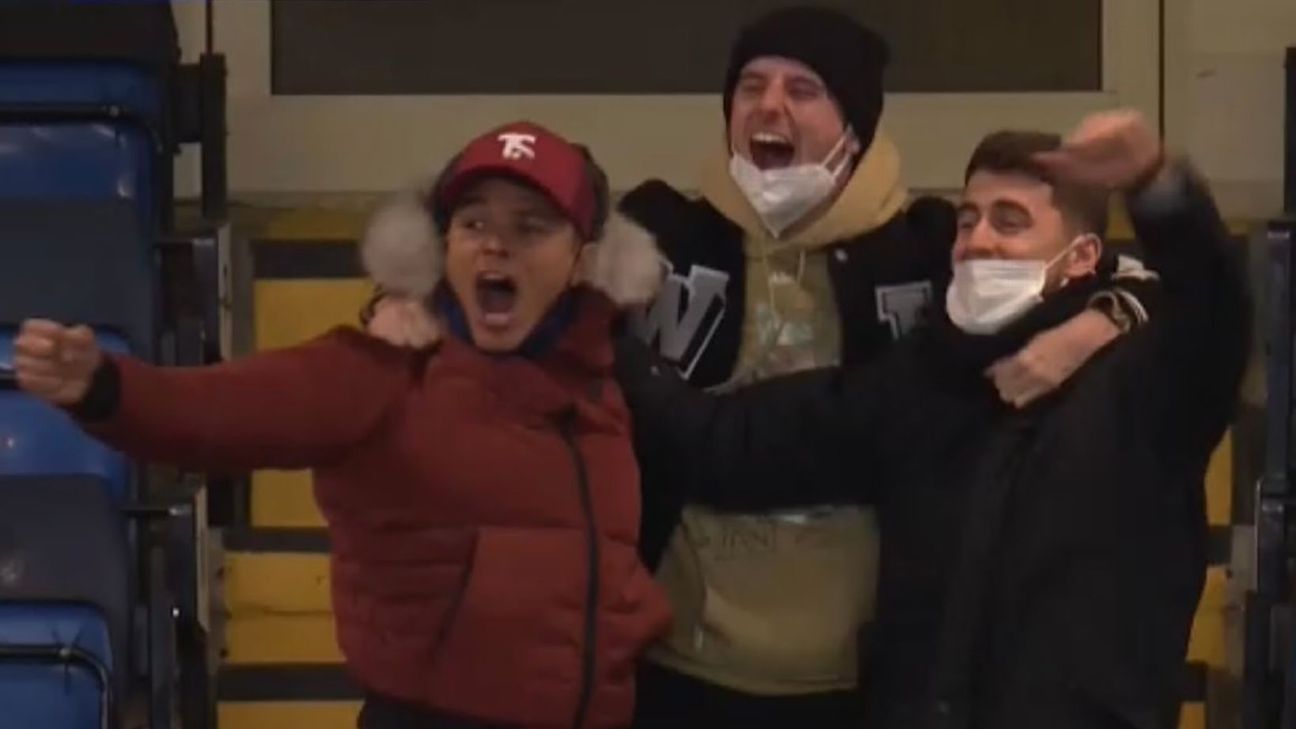 
Chelsea extended their unbeaten streak under Thomas Tuchel and booked themselves a berth in the quarterfinals of the Champions League with an impressive win over Atletico Madrid on Wednesday.

Goals from Hakim Ziyech and Emerson Palmeiri were enough to secure a 2-0 victory at Stamford Bridge and a 3-0 victory on aggregate — the Blues therefore becoming the first team without Cristiano Ronaldo in it to eliminate an Atletico Madrid managed by Diego Simeone from a European knockout tie.

The Premier League side were forced to venture into the second leg without seasoned centre-back Thiago Silva due to a thigh injury that has kept him out for several weeks. Before kick-off, the Brazilian vowed to “cheer from the stands” in an effort to motivate his teammates

The 36-year-old really over-delivered on his promise, kicking every single ball and running the whole gamut of emotions as he watched from on high in the East Stand.

The defender was marshalling his troops as the final whistle loomed, taking advantage of the empty ground to bellow instructions down to his cohorts on the pitch.

Thiago Silva coaching and cheering the lads on from the stands. Could you love him anymore? 💙 pic.twitter.com/65vg0ee5sn

However, plenty of viewers were sure that Silva’s pose, crouched forward with hands on knees, had been seen somewhere before.

Then, as substitute Emerson fired home the Blues’ tie-clinching goal with his first touch of the game, Silva was joined by Mason Mount and Jorginho (both of whom missed that game through suspension) for an ecstatic group celebration.

Indeed, the sight of Silva bounding about and roaring his side on right into the final seconds of the match was another one familiar to those watching at home.

Some deemed Silva’s motivational moves so crucial to his team’s performance that he even got a high mark for his efforts.

Feels like Thiago Silva should get a mark as part of the Chelsea player ratings tonight. 9

Having recently returned to first-team training, the veteran defender’s energetic cheerleading throughout the game also convinced several spectators that he may be ready to return to action.

“I think this might be part of his rehab,” joked Glenn Hoddle, BT Sport co-commentator and former Chelsea player-manager. “There’s nothing wrong with that hamstring. He’s passed his fitness test for the next game!”

Silva’s intensity in the terraces was more than matched on the pitch by N’Golo Kante, who put in a truly Herculean shift in the centre of Chelsea’s midfield.

The Frenchman was everywhere, shutting down Atletico attacks, covering runners, breaking forward on the counter-attack and almost literally covering every blade of grass.

N’Golo Kanté, who played the entire game, sprinted the length of the pitch in the 94th minute to provide a dummy run so Chelsea could score.

Kante’s stats come the end of the game were astounding, with the midfielder amassing 97 touches, a 88% pass completion rate, 13 recoveries, and four ground duels won; as well as a couple of key clearances, interceptions and passes. Unsurprisingly, then, he was named Man of the Match as Chelsea waltzed into the quarterfinals. Presumably, Thiago Silva came second in the running for the award.

The Blues have become an impenetrable force since Tuchel’s arrival in January, with 13 games played, 11 clean sheets kept, nine wins in the bag and not a single defeat as yet — the longest ever unbeaten start by a manager in Chelsea’s history.

They now join Manchester United (14) as the only English teams to make at least 10 Champions League quarterfinals, though this will be their first appearance in the round since Jose Mourinho was in charge (2013-14).

As for Tuchel, he will be one of four German coaches in the quarterfinals, the others being Hansi Flick at Bayern Munich, Edin Terzic at Borussia Dortmund, and Jurgen Klopp at Liverpool.

This represents the first time in Champions League history that four coaches of the same nationality have reached the last eight of the competition. Wunderbar!