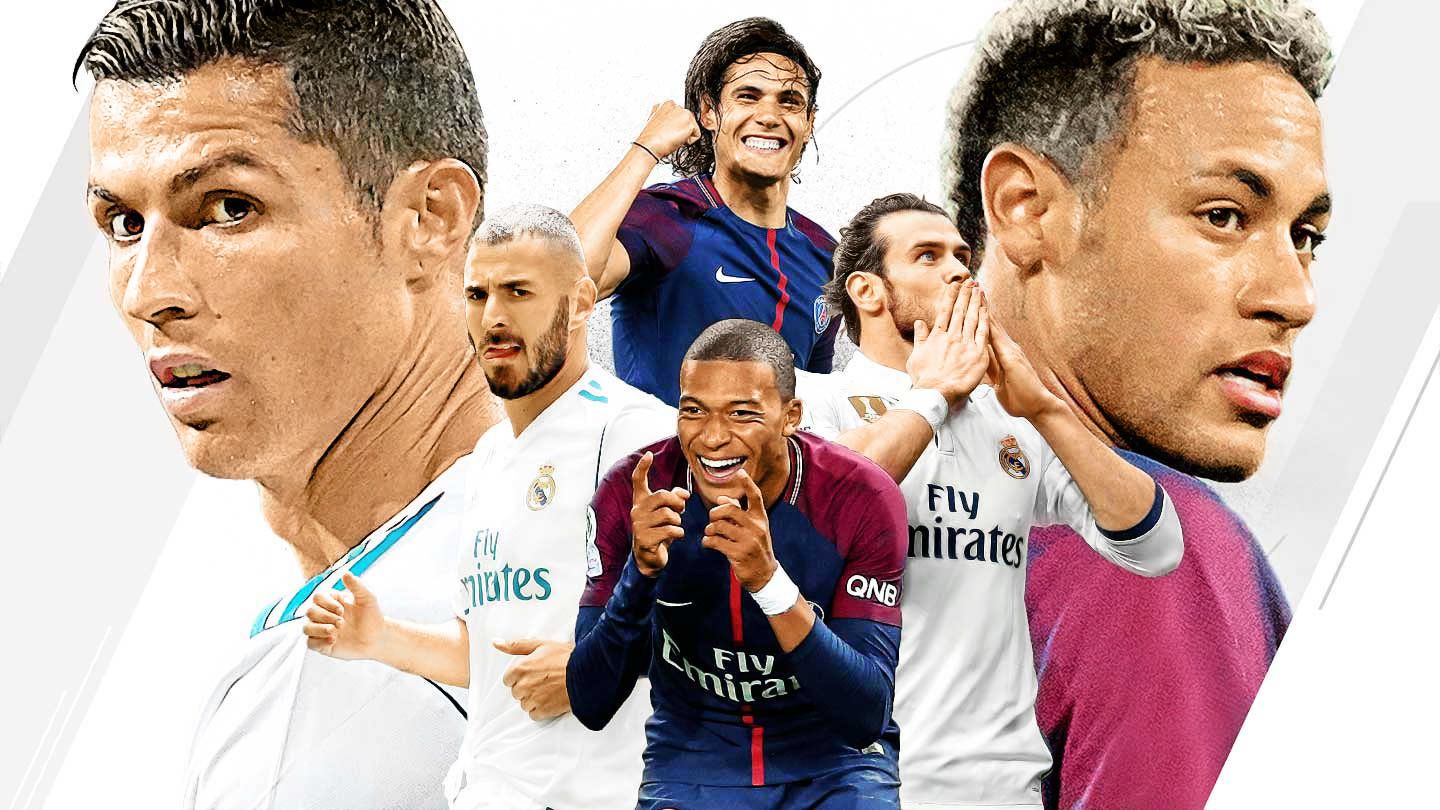 
For years Barcelona’s “MSN” was considered the best strikeforce in Europe, then Neymar left for Paris Saint-Germain this summer. The French side may now have assembled the most expensive forward line in football history — with €466 million worth of Neymar, Edinson Cavani and Kylian Mbappe — but are they the best strikeforce around?

ESPN’s correspondents have all argued the case for their team’s attack to be No. 1, but Senior Writer Mark Ogden has ranked them all and concluded there’s no upsetting the established order yet.

“With Cristiano Ronaldo and Lionel Messi in their armoury, it is impossible to look beyond Real Madrid and Barcelona respectively as the top two,” he says. “Ronaldo and Messi are the still the best around and having one of those is arguably better than having three of the best from the rest.”

Do you agree? Tell us what you think and cast your vote here.

Ever since Bale joined Benzema and Ronaldo in summer 2013 there have been questions surrounding Real Madrid’s galactico trident. But three Champions League titles in the four seasons since show that when all are fit and firing ‘the BBC’ cannot really be topped. Ronaldo’s burst of goals which secured last season’s double success showed that, at 32, he remains the deadliest finisher around. Few players have Bale’s pace, physicality and directness when games open up, and Karim Benzema’s tactical intelligence and unselfishness helps unlock defences which sit tight. Critics will talk of tactical issues and personality squabbles, but for the moment at least the BBC remain the best. — Dermot Corrigan

Even without Neymar, any strikeforce which features arguably best player in the world is within its rights to be considered the game’s best. Lionel Messi has started the season in fine form, scoring 11 goals in his first seven La Liga games and leading an otherwise unconvincing Barca on a nine-game winning streak. Add to that Luis Suarez — a two-time European Golden Boot winner — and you have an extremely enviable forward line. Then throw in the man signed to replace Neymar: €145m worth of Ousmane Dembele. The France winger is cruelly out injured at the moment, but the talented 20-year-old will bring a sense of unpredictability to Barca’s attack when he’s back. MSD doesn’t have quite the same ring to it, but if they achieve the same success then Barca will be happy. — Sam Marsden

I’m sorry but PSG’s front three is the best strike force in Europe, hands down. Costing around €466m (eventually), the trio are in great shape and rarely injured or suspended. Even when one or two are not in form during a match, one still manages to step up and inspire the team to victory in Ligue 1 or the Champions League. Despite Neymar and Cavani’s recent penalty spat during the win over Lyon, the three stars are complementary. To date, the prolific MCN triumvirate have racked up 22 goals and 11 assists and we are only just entering October; much better than the rest. — Jonathan Johnson.

In Harry Kane, Spurs have the most in-form goalscorer in Europe and the only player who has matched Lionel Messi and Cristiano Ronaldo in 2017 (despite an ankle injury and his annual August lack of goals). Behind the 23-year-old, there is Dele Alli, 21, Europe’s best young goalscoring midfielder, who is also developing a Ronaldo-like obsession with goals. Christian Eriksen, 25, has stepped-up a level in the past 18 months and there is a strong case that he is now the most consistent playmaker in England. What sets the young trio apart, though, is their work-rate. Alli and Eriksen routinely cover as much ground as anyone in the Premier League, while Kane’s ferocious energy never drops. Signing Zlatan Ibrahimovic, to complete an amazing IKEA, would make their acronym a bit better though. — Dan Kilpatrick

Take a look at the top nine scorers in the Premier League and each of the title rivals is represented once in that list, apart from Manchester City who have three representatives. Sergio Aguero is second in the chart with six goals — one goal behind Romelu Lukaku, despite playing 163 fewer minutes —  Raheem Sterling also has five and Gabriel Jesus four. City’s forward line have now started to fully implement the Pep Guardiola philosophy, pulling good teams apart and punishing any side not completely switched on. Remember, these goals are coming in the ultra-competitive Premier League where there are no giveaway games to bulk out their statistics, too, which is why they have one of the most dangerous attacking units in Europe. GAS even works if you bring in any of David Silva, Leroy Sane or Bernardo Silva for Sterling. — Jonathan Smith.

Jose Mourinho’s forward line has almost everything. Romelu Lukaku, quick, strong and good in the air, cannot stop scoring and has already got eleven in 10 games for United. Marcus Rashford on the left is lightning fast and skilful, while Juan Mata on the right is more subtle, drifting inside to find space to pick a pass or shoot with his left. And with conductor Henrikh Mkhitaryan playing in behind too. It is the combination of it all that has made United so dangerous this season. Overly-reliant on Ibrahimovic last season, they became predictable in the way they attacked and it cost them points. Lukaku’s ability to hold up the ball and run in behind helps create space for other players, Rashford and Mata included, making United’s RLM a different prospect this season. — Rob Dawson.

Significant injuries to Eden Hazard and now Alvaro Morata mean fans haven’t actually seen this trio in action together on the pitch yet and it could be some time before we do, but there’s every reason to think that Chelsea’s strongest attacking combination is a match for anything else in the world. Hazard is arguably the Premier League’s best player when fit and firing; Morata is an elite, intelligent focal point who helps those around him shine as well as creating chances for himself. Once you add Pedro’s smart running and lethal finishing with either foot to the mix, you have a front line that can do pretty much anything to any defence. MPH surely has the speed to contend at the highest level. — Liam Twomey

It’s a frontline that plays without a recognised striker but, at times, can be as potent as one with a world-class No. 9 at its figurehead. The trio of Salah, Firmino and Mane all work in tandem and spread out the goal production, with Coutinho playing a leading role behind to assist — hence the borrowing of the Beatles’ famous “Fab Four” moniker. Defensively, they are crucial to Jurgen Klopp’s high-pressing style, but their relentlessness and speed makes them one of the best attacks in European football when it all clicks. Mane is on the pathway to becoming an elite player, while Coutinho continues to show exactly why Barcelona were so keen this summer. After that, defences then have to contend with the pace of Salah and intelligence of Firmino. — Glenn Price

Since joining Bayern Munich on a free transfer from Borussia Dortmund, Lewandowski has added three straight Bundesliga titles to the pair he won at the Westfalenstadion under Jurgen Klopp. He’s bagged 30 league goals for the Bavarians in successive seasons — including that remarkable record-breaking five-goal barrage in nine minutes as a substitute against Wolfsburg in 2015 — and remains remarkably injury resistant. The same cannot be said about Arjen Robben, but if fit (those magic words) the Netherlands skipper has consistently shown he is one of the best in the world. Add Thomas Muller to this trio (instead of Franck Ribery/James Rodriguez) as the Raumdeuter, and the wily “interpreter of space” makes the German champions’ LAM of the most dangerous attacks in the business. — Mark Lovell

Boasting creativity, efficiency and intelligence, Juventus possess a frontline that most teams would covet. Working in tandem and inspired by the genius of Paulo Dybala, a player who possesses all the skill and vision required of a future Ballon d’Or winner, Gonzalo Higuain is at his deadliest in front of goal when aided by his Argentine teammate. A duo that understand one another, they sacrifice, create opportunities and convert them with blistering efficiency. Aided by Mario Mandzukic, a striker who never misses an opportunity to score on the big stage and is generous all over the pitch to ensure cohesion, Juventus have forged an MHD attack that can terrify the greatest of defences. — Mina Rzouki

With Marco Reus out injured deep into the season, Dortmund added the physicality and experience of Andrej Yarmolenko to Aubameyang’s deadly instincts inside the box and Christian Pulisic’s pace and skill down the wings. The three of them, and Maximilian Philipp, have provided for 15 of Dortmund’s 21 league goals this term. YAP have wreaked havoc on Bundesliga defences. The domestic average of exactly three strikes per match puts them level with Manchester United as Europe’s fifth-best attack, but YAP are hailing from a league which has failed to produce goals for the most parts of this new season. — Stephan Uersfeld

Arsenal have had a star duo for the last three years, but have now upgraded that to a terrific trio. While we have yet to see Mesut Ozil, Alexis Sanchez and Alexandre Lacazette on the pitch together at the same time, it’s easy to envision them wreaking havoc on Premier League defences. With Ozil’s vision, Sanchez’s energy and Lacazette’s clinical finishing, this triple threat has it all. Ozil and Sanchez were hard enough to handle on their own — their new playmate could make them unstoppable. Shame it spells LOS though. — Mattias Karen