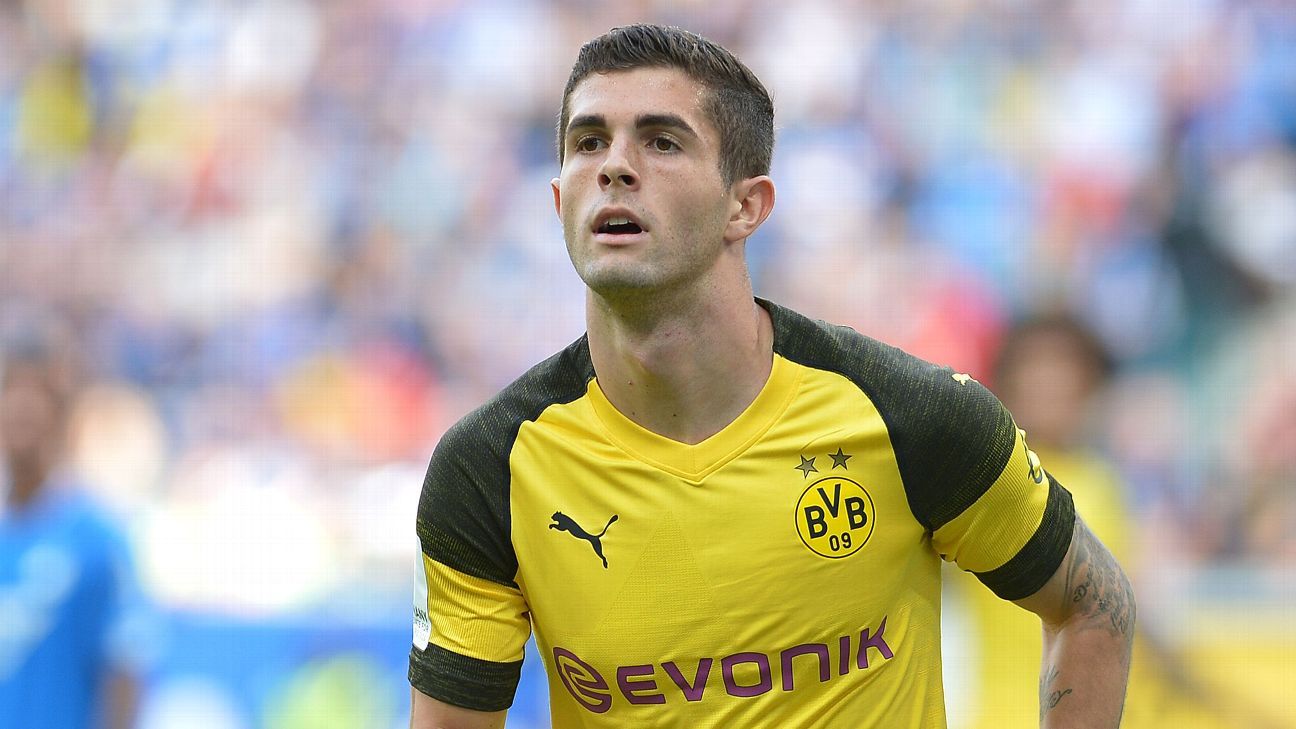 
“We will not sell a player in winter who’s essential to us achieving our sporting aims, of course,” Borussia Dortmund’s Michael Zorc told Sport-Bild in relation to Christian Pulisic this week. “I strongly expect Christian to be wearing the BVB shirt in February,” the sporting director added.

The league leaders’ overriding concern is to ensure that the squad stays strong and deep for the second half of a campaign that promises to deliver a championship for the first time since 2012. At the same time, the wording of Zorc’s statement reveals an amount of flexibility on two fronts.

In purely financial terms, a significant offer for a player unwilling to extend his contract beyond 2020 will be hard to turn down. Secondly, it’s debatable just how “essential” the 20-year-old is actually still regarded by his coach Lucien Favre. Pulisic has played regularly, chipping in with decent numbers (three goals and four assists in 16 games), but he’s neither an automatic starter nor among the club’s most prolific forwards. For the right price, Dortmund could well be tempted to let him leave six months early.

But given the choice, where should he go? Here’s a look at the four likeliest contenders for the 20-year-old’s signature.

Why it could work: Maurizio Sarri’s possession football, once fully formed, will provide an ideal environment for Pulisic’s qualities. As an attacking midfielder who’s neither a true No. 10 nor an orthodox winger, he’s arguably best suited to a slightly slower build-up game, where his ability to take up intelligent positions between the lines will come to the fore. Manchester City aside, Chelsea play the most cultured game in the Premier League, and there’s likely to be a real need for his type of services in the wake of Eden Hazard’s expected departure. Transitioning from Favre’s Dortmund, a team employing similar patterns of play in possession, would be pretty a frictionless affair. The pull of London, too, will prove huge.

Why it wouldn’t work: Sarri has been too busy re-imagining the Blues’ approach post-Antonio Conte to spend any significant time honing younger players. Callum Hudson-Odoi and Ruben Loftus-Cheek have only featured marginally, and the pressure to compete in the most competitive league as far as Champions League places are concerned will ensure that patience will remain in short supply. A high transfer fee will mitigate these disadvantages — Sarri would be more or less forced to play him — but Pulisic’s development might be smoother in a team that doesn’t expect goals and assists in every single game. He’s still growing and inconsistent. As Kevin de Bruyne and Mohamed Salah can attest, Chelsea haven’t always done well when it comes to giving highly talented younger players enough time to hone their skills.

Why it could work: The success of Xherdan Shaqiri has proven that Jurgen Klopp’s high-octane game can benefit from the addition of a different type of forward. What Pulisic lacks in directness, he makes up for in short diagonal movement and passing. Liverpool are easily the most accomplished Premier League side among the contenders for his signature, and there’s a strong chance that the combination of a functioning team and excellent man-manager will see him vastly improved in a short space of time. The Reds’ U.S. owners will furthermore help him utilise his huge marketing potential.

Why it wouldn’t work: The competition for starting places he has encountered at Signal Iduna Park this season will be just as tough at Anfield, if not tougher. There’s no natural position in Liverpool’s default 4-3-3 formation for him; he will have to rely on Klopp’s nascent transformation into a 4-2-3-1 team in order to become a mainstay. In addition, the strength of his supposed friendship with Klopp has been overstated. Their relationship is good but won’t afford him any special dispensation in a squad bursting with more-incisive and prolific attackers.

Why it could work: American-owned United, like Liverpool, naturally covet Pulisic as one of the emerging superstar brands in the U.S. On the pitch, however, they need him even more than their Merseyside rivals. Jose Mourinho’s team are in desperate need of a player who’s both quick and able to bring coherence to their rather random attacking game. Neither Alexis Sanchez nor his predecessor, Henrik Mkhitaryan, have been able to find the kind of solutions needed against defensive opposition; Pulisic’s intricacy would make a tremendous contribution and could soon prove invaluable. Continued doubt about Paul Pogba’s future at Old Trafford would strengthen his hand, too.

Why it wouldn’t work: Man United are unlikely to make it into the Champions League next season and don’t look as if they’ll be able to get any closer to City and Liverpool any time soon. Their game plan lacks clarity; attacking midfielders, in particular, routinely find themselves isolated and chasing second balls from deep starting positions. There’s also strong suspicion that Mourinho prefers warriors to artists. Young, technical players don’t necessarily thrive in the Portuguese manager’s dressing room, and few have become significantly better duding his spell at Old Trafford.

Why it could work: The impending departure of Arjen Robben and Franck Ribery creates an opening for creative players of Pulisic’s ilk. He could also leverage Bayern’s longstanding interest in signing a prominent American player that could further their growth prospects in the U.S.: the rebuilding process at Sabener Strasse affords a real opportunity to become one of the faces of one of Europe’s most successful sides, with all the financial and sporting opportunities that would entail. Bayern’s more measured attacking game provides a very good fit as well.

Why it wouldn’t work: There’s no guarantee that the aforementioned changes at Bayern won’t extend to the coaching staff by the time Pulisic would swap yellow for red, which makes it difficult for any player to properly evaluate their opportunity for personal development in the near future. In either case, the Bavarians face an uphill battle to remain competitive in Europe as the ancient regime of Karl-Heinz Rummenigge and Uli Hoeness looks for successors while the Premier League’s firepower becomes more pronounced. What’s more, a move to England will probably sit better with Pulisic’s personal sponsors.

Chelsea look the best fit as things stand, slightly ahead of Liverpool. It’s just as well, too, considering the Blues are considered in pole position, having pushed hardest to secure an agreement with Dortmund.