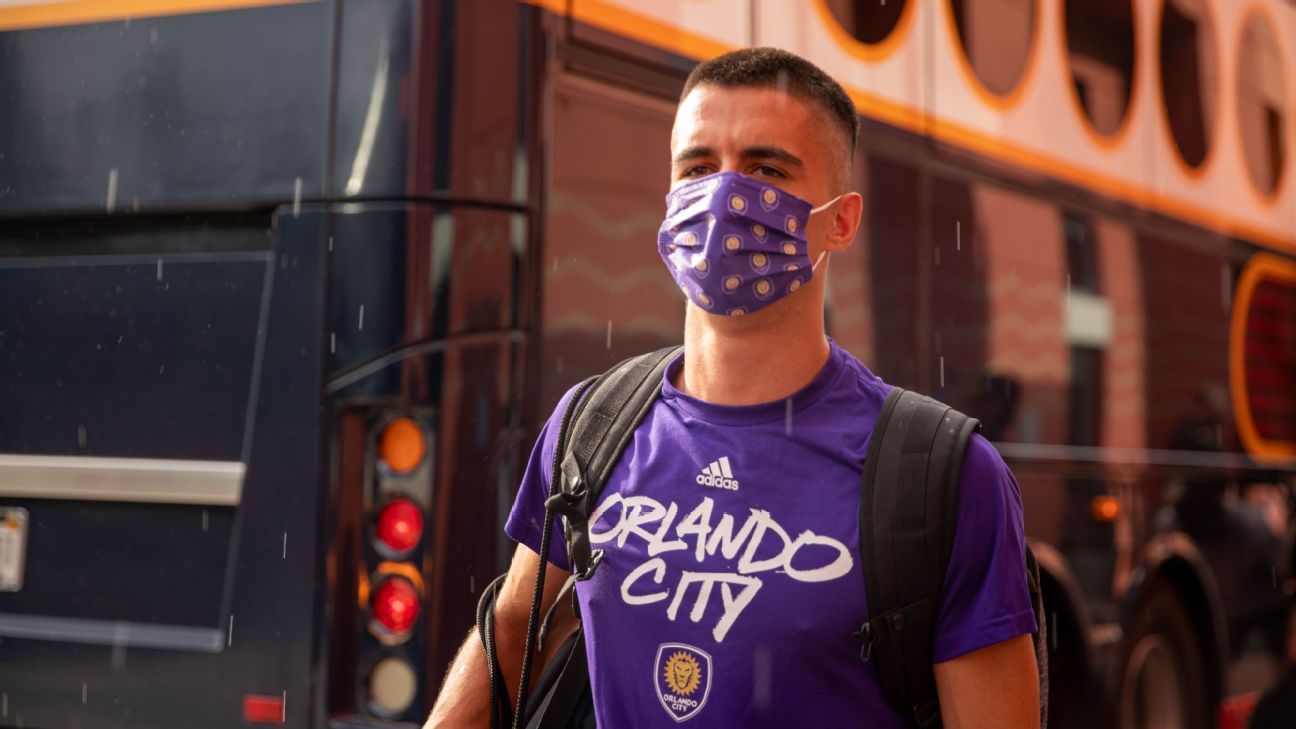 
Over the next six weeks, the MLS Is Back Tournament will see shouts of “Goal!” grace the environs of Walt Disney World. It also might witness roars of “You sank my battleship!”

MLS players received a 61-page player handbook last Monday that attempted to address a variety of player concerns, from the scheduling of various activities between matches to more basic matters such as food prep and security. And yes, the handbook included myriad suggestions for how the players can occupy the copious amounts of free time they’ll have in Orlando for seven hot summer weeks, including games of oversized Battleship.

ESPN has obtained a copy of the document, portions of which were previously reported by The Athletic. Here are some of the highlights regarding the setup inside the bubble. (Editor’s note: ESPN is owned by the Walt Disney Co.)

– Stream MLS is Back LIVE on ESPN networks and ESPN app (U.S. only)
– Group schedule set for MLS is Back Tournament

The bubble for the MLS Is Back Tournament is now officially in place, and while it is located on the grounds of Walt Disney World, it bears a closer resemblance to “Hotel California” as referenced by the Eagles. You can check out anytime you like, but you can never leave. It’s why Philadelphia Union midfielder Alejandro Bedoya wasn’t too far off when he referred to the tournament, being held at the ESPN Wide World of Sports Complex at Walt Disney World, as a “luxury prison.”

In the event that a member of the league’s entourage (including players, referees, club staff and league personnel) exits the bubble without authorization and attempts to reenter, that person will be subject to “enhanced testing” and a period in quarantine of 10 days. Players and staff must have written permission to leave the resort grounds, except in the case of a medical emergency.

The Swan and Dolphin hotels, where the teams will be staying, will be ringed by eight different security checkpoints as well as CCTV. At the quarterfinal stage, after July 29, the MLS Is Back bubble will be contained entirely in the Swan hotel, at which point there will be seven security checkpoints. Access to the hotel will be governed by a tiered system in order to minimize the possibility of infection and/or spread of COVID-19 to players and other tournament personnel.

So far, though, players say they feel “safe.” Whether “safe” morphs into “onerous” will be something to keep an eye on.

Only if they maintain social distancing of six feet. This includes the avoidance of “shaking hands, hugging or kissing.” Players will also be required to wear face coverings at all times except during meals or hydration, while in their personal rooms, engaged in outdoor activities, or taking part in training or matches.

More about the hotel

There are more luxurious hotels on the Disney grounds, but the setup for the players doesn’t sound half bad. Each team will be provided a private wing at their hotel, which includes 45 guest rooms, a suite for the manager, a club lounge and meeting rooms. The club lounges will include rooms for pingpong, playing cards or playing video games.

Each team will also have access to one of 10 performance training centers, which will be equipped with a “full range of equipment” including stationary bikes and treadmills. Each team is allowed one two-hour session per day, and every training center will be disinfected after every session. Two lap pools (one at each hotel) will be available for regeneration sessions.

In terms of non-soccer excursions, each team will be offered one complimentary golf outing as well as a fishing trip. Additional trips can be scheduled for a fee. The teams will also have access to beaches as well as a “Grotto Pool” with covered cabanas, tube rentals, water volleyball and water slides. Available outdoor activities will include “bocce ball, soccer pool, teqball tables, giant Jenga, cornhole, spikeball, oversized Battleship and Connect Four, billiards tables and ping-pong tables.” There will also be poolside movie nights featuring “pop-culture favorites.” (I eagerly await news on the player who wins the oversized Battleship competition.)

Players will have access to health and wellness resources including dedicated outdoor yoga, meditation and stretching spaces as a means of trying to unwind. There will also be access to the MLS Employee Assistance Program, which provides support for any mental health concerns, including those related to COVID-19.

When the idea for MLS Is Back was first broached, central Florida seemed like an ideal location given that other parts of the country were being harder hit by COVID-19. Not any longer. The recent coronavirus numbers for Orange and Osceola counties (where Walt Disney World is located) have been sobering indeed. Both the number of daily new cases and positive test rates have more than doubled in the past week, with Orange County recording 994 cases on Friday and a positive test rate of 17.1%. While those were not records, they were near the highs over the past two weeks. On Friday, Osceola County recorded 165 new cases (a high for the past two weeks) and a positive percentage rate of 13.1%, which was the second highest over the same period. All of this makes the health and safety protocols a vital part of the tournament.

The testing will be extensive to say the least. Players will be tested on the day they arrive, and then must stay in their rooms until they are cleared. Once cleared, an extended quarantine period will not be necessary. They will then be tested every other day or the day prior to match day.

Any tournament personnel recording a temperature above 100.3 degrees Fahrenheit or otherwise developing symptoms of COVID-19 will be given a face mask and a referral for a clinical check. If they are clinically stable, they will be sent to an isolation area of the resort until their symptoms are resolved or they are cleared by medical personnel. If unstable, they will be taken to the hospital.

“We Are LAFC” is a 10-part, all-access documentary series that brings fans to the heart of Los Angeles and tells the story of one of soccer’s most-anticipated projects. Stream on ESPN+ (U.S. only)

Anyone testing positive for COVID-19 will be given an assessment and put in an isolation area, where they will remain until cleared by MLS medical staff. Contact tracing will then commence and all areas where the individual was present will be disinfected.

What about the hotel staff?

This has been viewed as a vulnerability of the proposed “bubble” since hotel staff will be allowed to leave the resort area and won’t be subject to testing for COVID-19. The staff will have to adhere to protocols regarding screening, temperature checks, use of PPE at all times and social distancing protocols. The hotels will also engage in “enhanced cleaning and disinfecting” of rooms and high-touch surfaces, with players able to govern how often housekeeping enters their rooms.

Disney will implement processes and train its employees on the use of face coverings as well as social distancing so as to minimize close contact with players and team staff. This will not include hotel staff since the hotels are owned and operated by Marriott.

Commissioner Don Garber discusses how the MLS is Back Tournament came about and the process the league will undergo if a player is diagnosed with the coronavirus.

This has long been a source of concern among the players, especially given the freedom hotel workers will have in terms of leaving the bubble. Each team will have a dedicated meal room, as well as access to one of the hotel’s restaurants. Players can also have food delivered via Uber Eats, DoorDash or other local providers. Expect the coaches to take advantage as well.

Practices and games will take place at the ESPN Wide World of Sports Complex. Each team will be allowed one 90-minute session per day at 8 a.m., 10:30 a.m., 7 p.m. or 9:30 p.m. ET. Games will be scheduled for 9 a.m., 8 p.m., or 10:30/11 p.m. ET every day throughout the tournament. Given the need for teams to have pregame meals before matches, the 9 a.m. starts will be about as popular as you’d imagine, though it still beats playing in the midday summer heat and humidity of central Florida. All of these events will take place behind closed doors, with media members limited to certain areas of the complex while being subjected to a health questionnaire and temperature checks. Any individual who doesn’t pass the screening will be denied entry or “asked to leave.”

Once inside the bubble, each side will be allowed one scrimmage against another MLS club, but only if the teams have been at the resort for seven days. Players and staff will be required to undergo a PCR COVID-19 test 24 hours prior to the scrimmage.