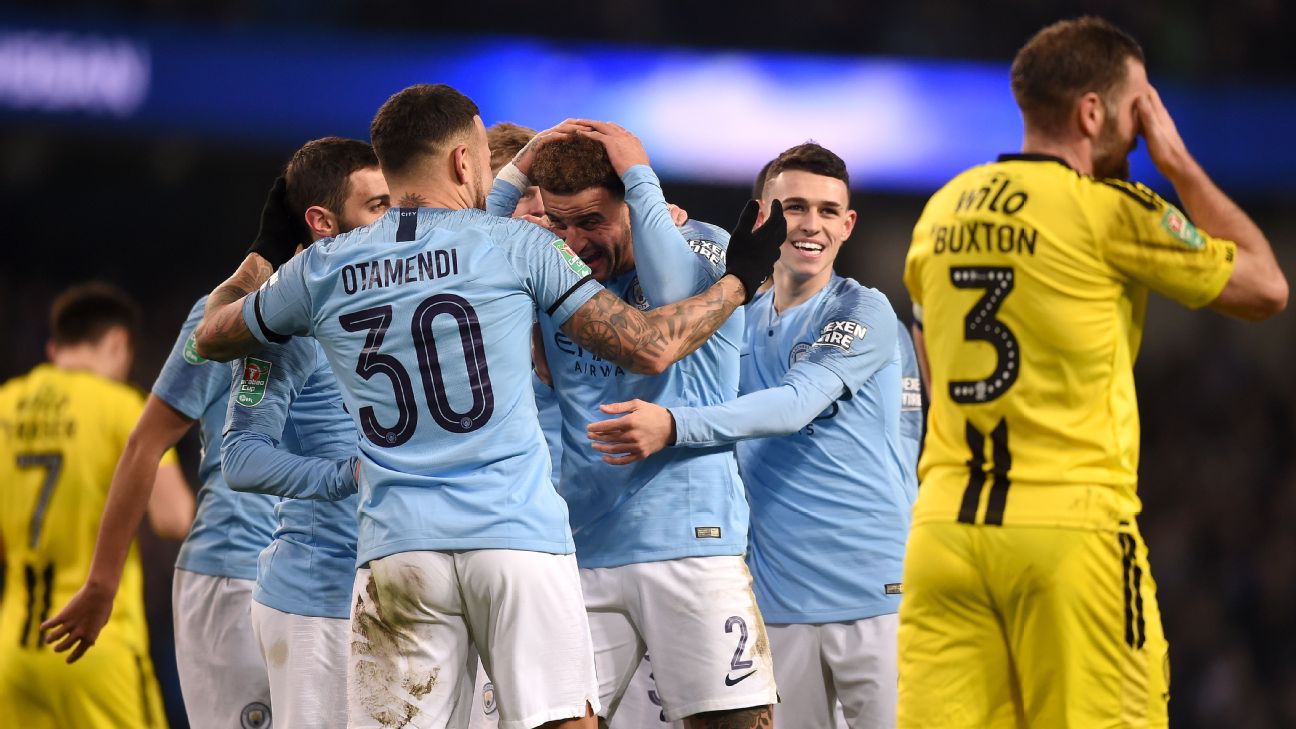 
When Manchester City defeated Burton Albion in the first leg of their Carabao Cup semifinal early this month, the result sent Twitter into a tizzy. Did Pep Guardiola & Co. need to score that many goals? Was it overkill? Or was it City’s duty to go out and win as emphatically as possible?

As we head into the second leg (watch live at 2:45 p.m. ET or on replay on ESPN+), ESPN FC senior writer Mark Ogden and deputy editor James Martin go head-to-head to argue their cases.

Teams should score as many goals as possible!

Sport is spectacle. It’s entertainment. So why were there so many people in a white-hot rage when Manchester City ran up the score to the tune of nine goals in their Carabao Cup semifinal first-leg encounter with Burton Albion? If the reaction on Twitter was anything to go by, you’d have thought Jesus (scorer of four goals) & Co. were waterboarding puppies.

Guess what? The point of football is to score, not to worry about whether you’re embarrassing your opponent. As far back as the late 1800s, you had Preston North End beating Hyde United 26-0 and Dundee Harp dropping 35 goals on Aberdeen Rovers. There are recent examples, too: Villarreal crushed Navata 27-0 in a 2009 friendly, and on the biggest stage of all, the World Cup, Germany ran the board up 7-1 on Brazil — in Brazil — in 2014. Are we to heap scorn on Jogi Low for showing no mercy? Please. It was the most memorable moment of the tournament. Just this past weekend, PSG crushed Guingamp 9-0.

Goals are entertaining. It’s the first — and often only — thing you see on highlight reels for a reason. I’m not going to fault Kevin De Bruyne, Oleksandr Zinchenko, Phil Foden, Kyle Walker and Riyad Mahrez — all of whom also netted against hopeless Burton Albion — for going for the proverbial jugular.

I know: Man City’s opponents play in League One, the third tier of English football, and they were a genuinely abject side that could make a pub team look like world-beaters, but that’s no reason for City to apply the brakes. Pep Guardiola would never: After all, nobody complained when his Barcelona side thrashed Real Madrid 6-2 in 2009. In the Carabao Cup, he put out a team that would feel at home in the Premier League. The right call. If he played the kids? He’d be slammed for not taking the competition seriously.

City could have kept the score closer. But manipulating the game to maintain, say, a “respectable” 3-0 is the epitome of a backhanded compliment. On the surface, you’re trying to make your opponent look good, when in reality, you’re doing the opposite. And by the way, what’s the acceptable cutoff for running up the score? 3-0? 4-0? 6-0? Talk about an arbitrary line in the sand.

Besides, if you turn the game into an endless series of sideways and back passes to take the sting out of the attack until time runs out, the match transmogrifies into the classic Monty Python skit “The Philosophers’ Football Match,” in which nothing happens for 90 minutes between Archimedes, Socrates, Nietzsche and the crew.

Instead, City cut through lowly Burton in gladiatorial style. The only thing missing was a Russell Crowe “Are you not entertained?” from Jesus.

For the record, the answer is “yes.” — James Martin

When I tweeted during Manchester City’s 9-0 Carabao Cup semifinal first-leg victory that Pep Guardiola’s players were pushing the boundaries of professional etiquette by ruthlessly chasing goals against their third-tier opponents, the response was fairly predictable. That response largely centered on professional sport being a place where there is no hiding place and the suggestion that City were paying Burton the ultimate respect by keeping the foot firmly on the pedal and not easing off in the closing stages.

Every opinion is valid, of course, but mine has not altered as we approach Wednesday’s second leg at the Pirelli Stadium.

Had City been facing a Premier League opponent in a league game, my view would have been different. With points at stake and against a team from the same division, City would have been right to score as many goals as possible. After all, goal difference matters in league play, and City know this better than anyone, having won the 2011-12 title on goal difference ahead of Manchester United. But this was not a league game. Burton are a League One team; they currently sit midtable in the third tier of English football, and they are literally not in the same league as City’s all-star outfit.

When City opened up a 6-0 lead after 62 minutes, that should have been the signal for the home team to wind down. The game, and the tie, had been won. There was no way back for Burton, so the point of “professional etiquette” should have been about saving an opponent — a mismatched one at that — from an unnecessary humiliation.

As fellow professionals, City’s players should have protected their Burton counterparts from the humiliation that will now live with them for their rest of their lives, never mind their careers. This Burton team made history by reaching a major semifinal. They should be remembered as club heroes, but there is now a huge asterisk in the shape of the 9-0 hammering. Top-level sport has to be ruthless, but at some point, ruthlessness becomes humiliation, and that’s what happened when City made it seven, eight and then nine. — Mark Ogden