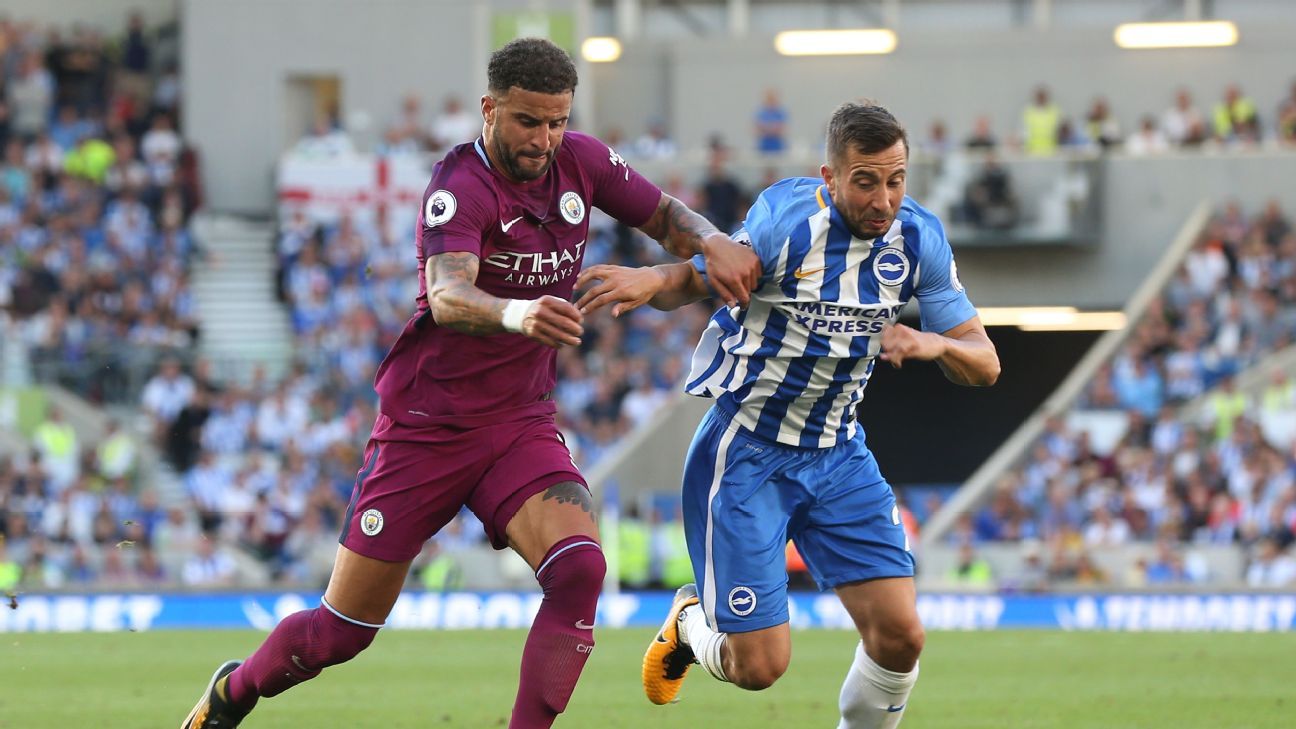 
Pep Guardiola has spent close to £200 million on new signings he hopes will transform Manchester City after his disappointing first season at the Etihad. It’s only one game into the season, but here’s an early impression of how those five players are making an impact …

In three preseason games and his Premier League debut, the England international has shown exactly what City have been missing from their full-backs.

His pace and thrusting runs stretched Brighton in their season opener as the Seagulls struggled to relieve the pressure on their own goal contributing to City’s 78 percent possession and the sort of monopoly of the ball which Guardiola is determined his side will have.

Defensively, Walker showed he had the speed to recover and defend when Brighton mounted a rare attack — the all-round contribution City lacked last season. Walker’s debut was slightly overshadowed by the performance of his replacement at Spurs, Kyle Walker-Peters, whose performance suggested the 27-year-old might not be missed at White Hart Lane. But it may help to be out of the spotlight after his £45m transfer fee drew some criticism in the summer.

The Brazilian kicked off life in England with a clean sheet and a relatively comfortable debut but he showed some signs of nerves at the AMEX. He fluffed one clearance, misjudged a through ball which Walker cleared and then dropped a corner during the very brief spell that Brighton threatened to score.

The 23-year-old escaped unscathed unlike his City teammate Claudio Bravo, who seemed to be punished for every minor error during a miserable first season. But apart from those indiscretions, he looked comfortable with the ball at his feet — the main requirement against a toothless Brighton side — quickly recycling the ball and picking out passes to kickstart attacks.

He showed in preseason that he is a capable shot stopper and he can be pleased with his start to life at City with Bravo now seemingly destined to be his understudy.

City insist the Brazilian has been brought to play on both sides as a full-back but in his early days at the club, he looks far more comfortable on the right.

Danilo made his Premier League bow as a left wing-back and while it was a largely solid performance he didn’t offer the same width as Walker on the other side. Often he would check back on to his right foot rather than taking the ball down the outside and wasn’t confident to offer overlapping runs.

That contrasted with his performance eight days earlier in the friendly against West Ham when he was dynamic getting forward, winning the ball high up the pitch and delivering dangerous crosses.

It potentially gives Guardiola a headache with days of the transfer window remaining. His three at the back gives added importance to the wing-back positions and with another new defender potentially arriving before September, the City boss may want a player who is comfortable at left wing-back and left msided centre-back, which would narrow his options considerably.

The Portuguese playmaker was late to link up with the squad after playing at the Confederations Cup and has so far been on the fringes of the action.

He was an 83rd minute substitution against Brighton with the game already won but he linked up neatly with David Silva and Kevin De Bruyne to pass the ball around the home side and almost create a third goal.

He played a full 90 minutes in City’s friendly with Girona and while he showed some nice touches, it was a disappointing performance from Guardiola’s side, who were beaten 1-0.

The 23-year-old will step up his involvement on a training camp in Spain and Silva’s importance will become clearer as his fitness improves and he puts pressure on his teammates for a starting spot.

Frustratingly, he is still to kick a ball due to a thigh injury but he has at least now started training with the first team. However, the French international has already become a cult hero among City fans due to his social media presence.

Some of it has drawn criticism from ex-players Steven Gerrard and Frank Lampard, however City supporters love it. He also teased his move from Monaco throughout the summer, with one Instagram post showing him in Union Jack shorts with the caption: “See you soon.”

It’s an impressive feat to become so popular without actually playing a minute of football — now his playing skills have to match his unmissable social media output.