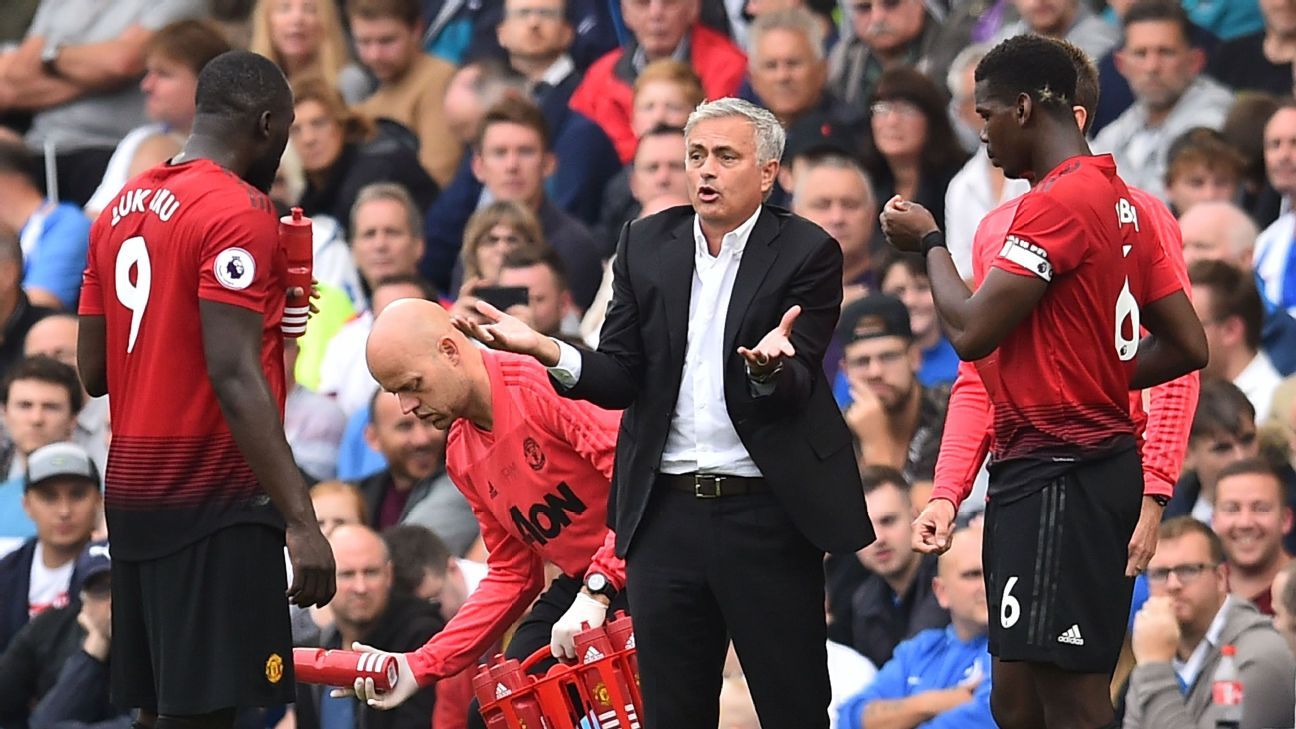 Ahead of each round of fixtures in the Premier League, W2W4 looks at the main storylines to keep an eye on. Here is what is in store for Matchday 3.

Generally speaking, Manchester United’s core support tend to back their manager — they didn’t even turn on David Moyes until relatively late — but clearly there is discontent with how this lopsided team looks and has been playing. At the moment it seems easier to last out at chief executive Ed Woodward rather than Jose Mourinho.

You wonder how long that will last, though. Even the most patient fans will not be content with spineless performances like last weekend’s 3-2 defeat to Brighton. Paul Pogba admitted his own attitude wasn’t right, which you could view as admirable fronting up, but also raises questions about what the manager is actually doing. Perhaps that’s what Pogba was hinting at.

More than the attitude, more than the centre-backs that Mourinho bought but now apparently considers substandard, more than the lack of coherence in the play, the most worrying thing about United was they didn’t seem to have a plan. When some teams lose, you can see what they’re trying to do even if it doesn’t work. That wasn’t clear last Sunday.

So are the players not listening to the manager, or does the manager not have anything to say? Neither is good. The similarities between Mourinho now and Mourinho at Chelsea three years ago are starting to show: should they lose to Tottenham on Monday, they will be unavoidable.

2. It’s already ‘must not lose time’ for Arsenal and West Ham

Welcome to the theatre of uncertainty. Four games between them, four defeats, three goals scored and 11 conceded. Arsenal and West Ham’s starts to the season could be going better; two sides still feeling their way into new eras, with new managers and new players.

The anxiety has been evident in both teams. Even so early in the season, this will be a crucial game for both teams: three defeats in a row isn’t crisis territory yet, but if one team does lose, they will be on that path.

But for one player it will be an even bigger occasion. This will be Jack Wilshere’s first game against Arsenal since leaving in the summer, and his tires were well and truly pumped up by Manuel Pellegrini this week.

“A lot of you will remember Juventus around four or five years ago played with one holding midfielder,” the West Ham boss said, discussing which position is Wilshere’s best. “It was [Andrea] Pirlo. And Pirlo is the same as Jack. He has the same characteristics as Jack.”

Quite a billing. He’s not in Pirlo’s class, but one suspects Wilshere will settle for being good enough to make Unai Emery think he made a mistake in letting him walk away.

Ultimately though, the return of Wilshere is something of a sideshow. The biggest task for both teams is to ensure their seasons don’t slip into a position where recovery and damage limitation becomes the primary aim before the end of August.

3. Another kind of test for Liverpool

Perhaps the most encouraging thing to come from Liverpool’s opening two wins, aside from Naby Keita and Alisson both sliding into the team as if they’ve been there for years, is that they were two different kinds of wins. West Ham were swatted aside with a ruthlessness that was occasionally missing against weaker teams last season, while Crystal Palace provided an altogether grittier test, which was passed, albeit with the help of an iffy penalty decision.

This weekend they face Brighton, who have very recent evidence that they are capable of giving a big boy a bloody nose, with their defeat of an admittedly abject Manchester United. But they are still a team who will be towards the other end of the table, come the end of the season. Liverpool’s test this week is not to take such an opponent for granted, as perhaps United did.

In isolation, beating Brighton in the third game of the season isn’t proof of Liverpool’s title credentials, but it represents another step down that path.

4. Could Sigurdsson be the Premier League’s most rejuvenated player?

Last summer Everton’s transfer business wasn’t just profligate, but almost entirely illogical. They recruited three No.10s and then wondered why Ronald Koeman, then Sam Allardyce were having problems forming them into some sort of coherent united. Wayne Rooney and Davy Klaasen are now gone, leaving Gylfi Sigurdsson as the primary creative force.

And the early signs are he’s much better for not being crowded out. Marco Silva has played a fairly standard 4-2-3-1 formation so far, with Morgan Schneiderlin and Idrissa Gueye giving the sort of protection that will allow players like Sigurdsson to play as they can.

Richarlison has deservedly received most praise for his three goals, but as the season progresses, the Iceland international will arguably be more important to Everton. Watch out for how he performs against Bournemouth on Saturday.

5. Morata needs another goal for Chelsea

It was interesting that, when Mauricio Sarri arrived at Chelsea, he didn’t appear to agitate for the signing of a new striker, despite Alvaro Morata’s struggles last season. Perhaps it’s because he’s used to working with what he has rather than spending his way out of trouble, but whatever his motivation, it was good news for Morata. And the two games thus far this season have provided some evidence to suggest the former Real Madrid centre forward’s zest might be back.

His goal against Arsenal is of course a good sign, but it was more his all-round performance that might have encouraged Sarri. Morata was more confident and more assertive, looking less like the striker who appeared terrified of his own shadow that we saw in the latter half of last term.

Another goal against Newcastle on Sunday, one that might suggest the strike against Arsenal wasn’t merely a one-off, would be even more reassuring.