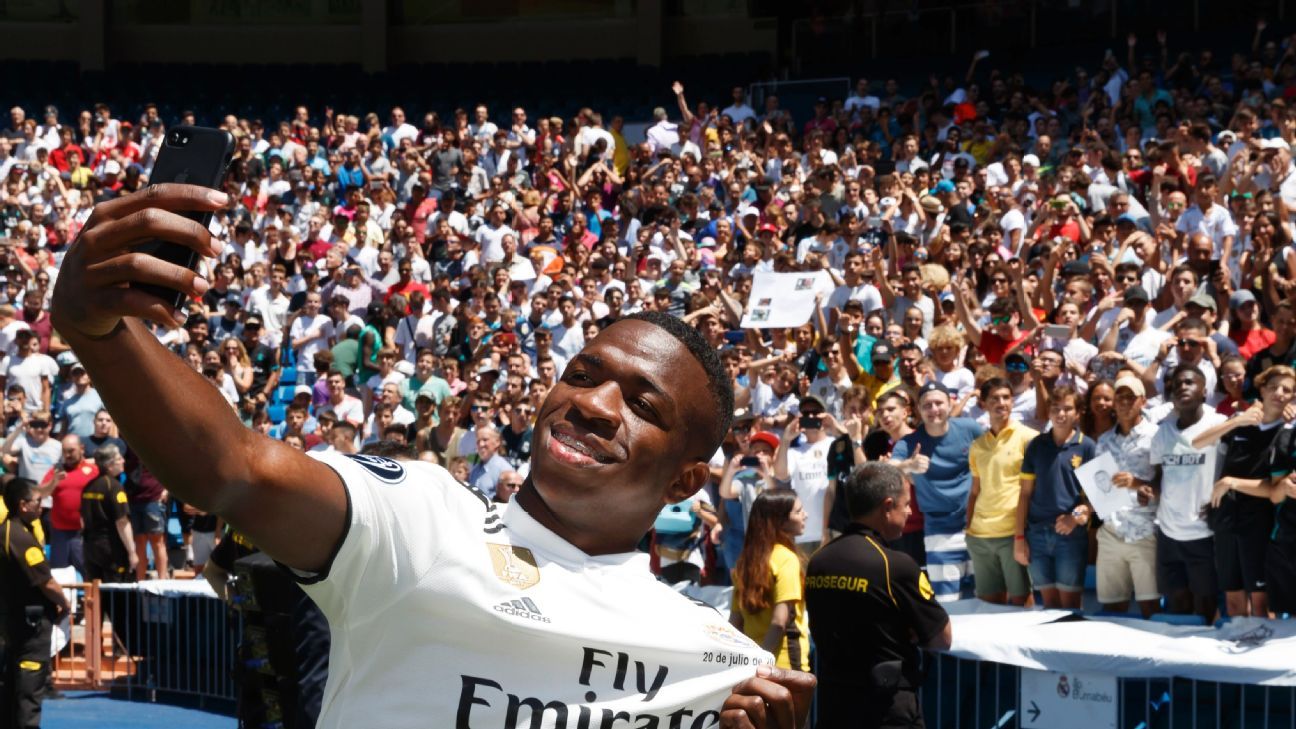 
With a nod to catenaccio purists, there isn’t much in football that gets the pulse pumping like a quick, fearless attacking player. France can attest to that. Liberte, Egalite, Mbappe, the T-shirts read after Kylian & Co. won the World Cup.

At the age of 19, the PSG forward has the world at his feet. Meanwhile, on Friday at the Bernabeu, Vinicius Junior was officially presented as a Real Madrid player mere days after his 18th birthday.

That landmark occasion paved the way for the Brazilian to complete his move from Flamengo, a deal that was hammered out a year ago as Real acted swiftly to land a widely coveted prospect. He wasted no time in providing a glimpse of what the fuss is all about, drawing comparisons with Ronaldinho in the Brazilian press for a move in his first Madrid training session.

The former Barcelona forward has even taken Vinicius under his wing, suggesting that Brazil should have taken a punt on him at the World Cup. That might have been too much too soon, though; in any case, Russia was supposed to belong to Neymar. Still, Vinicius said he was “ready” if the opportunity arose. It will — in 2022.

It seems as though Vinicius has always been ready. At 10 he was signed by Flamengo; by the time he was 13, he was in the Brazil under-15s. He then made his professional club debut at 16 just two months after leading the under-17s to the South American Championship, where he was top scorer and player of the tournament.

The parallels with Ronaldinho and Neymar are obvious but have so far been confined to the turf. There have been no tales of him turning up for training in sunglasses and taking a nap on the massage table. Equally, Vinicius Senior has been conspicuous by his absence throughout the transfer process. There is no suspicion of a sense of entitlement and no bespoke jobs for family members, factors that undermined Martin Odegaard.

“Sacrifice is not something new for me. I come from a very simple family, and am very proud of all they did for me and the values they have taught me,” Vinicius said at his unveiling. “I can do everything I did at Flamengo, and do better. I will show I am ready to play and show everything possible as quickly as I can.”

Perhaps the most flattering mirror to hold the 18-year-old up to is Ronaldo, who was on hand in his role as a club ambassador to welcome the prodigy to the fold. The legendary striker’s professionalism was rarely exposed to the same scrutiny as his shattered knees and his battle against hypothyroidism. Vinicius’ running, shooting ability and power all display shades of O Fenomeno; if Real have half the player on their hands, the reported €45 million fee will prove to be an absolute bargain.

Vinicius’ precocious talent should be unleashed this season, and not on Segunda B or Primeira Liga back fours. Equally, it should be the Bernabeu that bears witness, not Getafe, Rayo or Leganes on a season-long loan.

The very notion that Real would gift such a valuable asset to a neighbour is bordering on certifiable. The Castellana is not Ramsay Street; it’s far more likely that Vinicius will move between Castilla and the first team in 2018-19 with an emphasis on getting senior minutes under his belt. Before the season starts, he will also be given the opportunity to impress on Real’s tour of the United States.

Loans can be counterproductive. For every success story like Casemiro or Jesus Vallejo, there are more that go awry. The simple fact is that if you’re not good enough to play for Real Madrid, you’ll be found out fairly quickly.

The U.S. tour presents an opportunity for several players (Odegaard included) to seek redemption. For Vinicius, it’s the perfect introductory stage. There are still a couple of shirt numbers up for grabs and something of a void to fill on the left. He has already shown in training that he is getting a feel for things. Games against Manchester United, Juventus and Roma, however half-hearted, are an ideal audition.

Ronaldo started his European career at PSV Eindhoven when he was 17, scoring 30 times in his debut season. He will never see his equal but his career, and more recently that of Mbappe, serve to underline the old cliche: “If you’re good enough, you’re old enough.”

Florentino Perez said that Vinicius “is one of the great hopes of Brazilian football and world football, but who is already a reality.” There is no reason now for the Real president to put the stoppers on his own prophecy. He tried desperately to lure Mbappe to the Bernabeu last summer, presumably not with Castilla in mind despite the teenager playing only one full year at Monaco.

Vinicius has already cut his teeth in the Brasileiro. He should be given the opportunity to sink them into Liga defences next season.