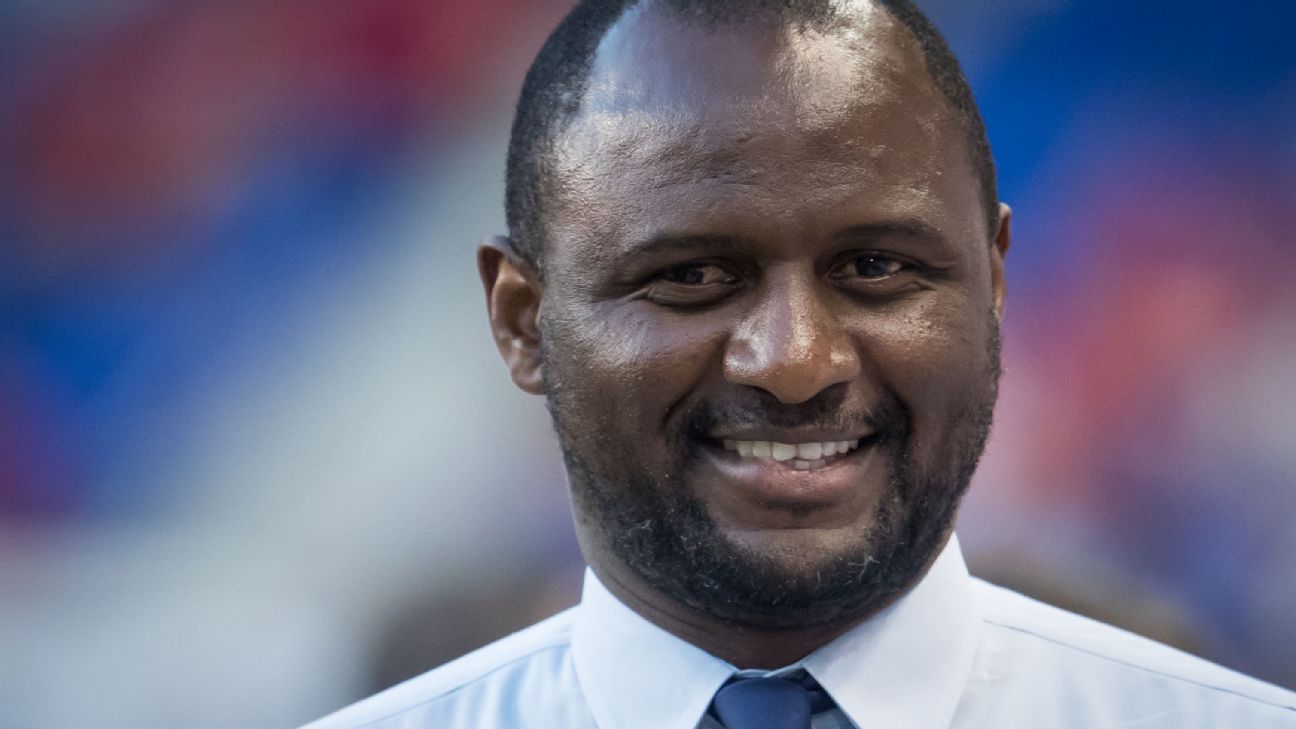 
Patrick Vieira didn’t think he wanted to coach. He never considered becoming a coach during his illustrious playing career, an 18-year span that saw him win three Premier League titles, five Serie A championships, the 1998 World Cup and the 2000 European Championship. Even after he retired in 2011 and took a job as the football development executive at Manchester City, Vieira didn’t believe his future was being the man in charge of an entire team.

But while Vieira was working with players, helping them individually to develop their skills, City executive Brian Marwood observed the former midfielder. He saw Vieira’s ability to communicate with the younger men who were trying to improve their game and the ease with which he imparted the wisdom he learned during the thousands of hours he spent on the field. Marwood thought Vieira might be able to succeed with a whole team. In the spring of 2013, Marwood appointed the French legend as reserve team and development squad manager.

“[Marwood] put me in the situation where I’d never been before,” he says to ESPN FC in an exclusive interview. “I quite enjoyed it and quite liked it.

Three years later, the man who never thought he would coach finds himself leading New York City FC, one of Major League Soccer’s best teams. Not only that, but NYCFC boasts one of MLS’ most distinct playing styles, a high-risk, high-reward, build-from-the-back mentality that produces exciting attacking soccer, even in the small confines of Yankee Stadium.

The broad strokes of the style come from the higher-ups at the City Football Group that owns NYCFC — Claudio Reyna, the MLS club’s director of football operations, calls it “part of the group methodology” — but the day-to-day implementation falls to Vieira. He’s the one responsible for tutoring players, drilling tactics and getting the little things correct. His success in doing so has NYCFC near the top of the Eastern Conference for the second year in a row and tied for the league lead in goals scored.

While the club has given up its fair share of terrible goals, the result of bad turnovers at the back and other miscues, it hasn’t deviated from its plan. To many, that’s deserving of praise.

“So many times in soccer we see people talk about style of play, but it’s all a bunch of bulls—, because they really aren’t trying to implement anything other than the most pragmatic way of playing in that moment against that opponent,” former LA Galaxy GM and current Fox Sports analyst Alexi Lalas says. “For me, a real style of play means, ‘This is who we are and we live and die by it. We don’t change to fit the players. The players adapt or they are not part of it.'”

To play the same way, even after failure, takes confidence, both from the management and the players. That starts at the top, with the coach.

“The players buy into what he’s saying,” NYCFC midfielder Rodney Wallace says. “Even if sometimes it goes wrong, it doesn’t matter because he knows that at some point it’s going to work out. He’s not afraid to make a mistake and he’s not afraid of when we make mistakes. He knows that we were out there doing exactly what he’s asking.

“The type of football that we play is exciting. It makes me want to wake up every morning and go to work.”

The plan didn’t come together overnight. Vieira took the NYCFC job at the beginning of 2016 after the club parted ways with founding manager Jason Kreis, but Vieira admits he struggled at first. He had to adapt to the peculiarities of MLS and understand soccer culture in the U.S. (Amusingly, Vieira calls the sport “soccer” when he talks about the game in the U.S. and “football” when speaking about teams overseas.)

During his time in Manchester, he developed ideas about how he wanted his team to play and how the City Football Group’s management thought NYCFC should play, but the reality of actually getting to America and working with the players here made him realize he had to adjust his methods and style. He uses more video, conducts plenty of tactical drilling and unit work along with individual instruction, and keeps an open mind. Vieira is only a couple years into what could be a long coaching career, and he knows he’s still learning.

“For him, there is an ability to test things out in a way that he might not get in other situations on other teams,” Lalas says. “Because it’s MLS. There’s no relegation. And there’s less scrutiny and therefore less pressure.”

At some point, perhaps sooner rather than later, Vieira will want to move on to a bigger gig. He says he’s happy building something at NYCFC now, and there’s no reason not to believe him. He loves living in the city, a place where he’d come in the offseason during his playing days, but it’s only natural that a competitive guy will grow restless eventually. When he does, the reps he’s getting in the relatively uncritical U.S. will benefit him well. It’s not out of the question to think he’ll be the first great MLS coaching export of the modern era.

The move into coaching required a different mindset than he had as a player.

Still, those playing days are not very far gone. How would Vieira, the coach, feel about managing Vieira, the player?

He won’t get a chance, of course. But Vieira the player would no doubt be surprised to fast-forward a decade and find where he landed. Perhaps he shouldn’t have been. As it turns out, this coaching thing, it’s not so bad.

Man United’s draw at Liverpool a sign of progress that can fuel their Premier League title ambitions
Becky Sauerbrunn named new U.S. national women’s team captain
As Ozil leaves Arsenal, Aubameyang and Lacazette have already decided who inherits his No. 10 shirt
Can Bayern fix their defensive woes before it costs them more trophies?
Man United can win Premier League, believes Scholes, but must first clear major hurdle at Liverpool