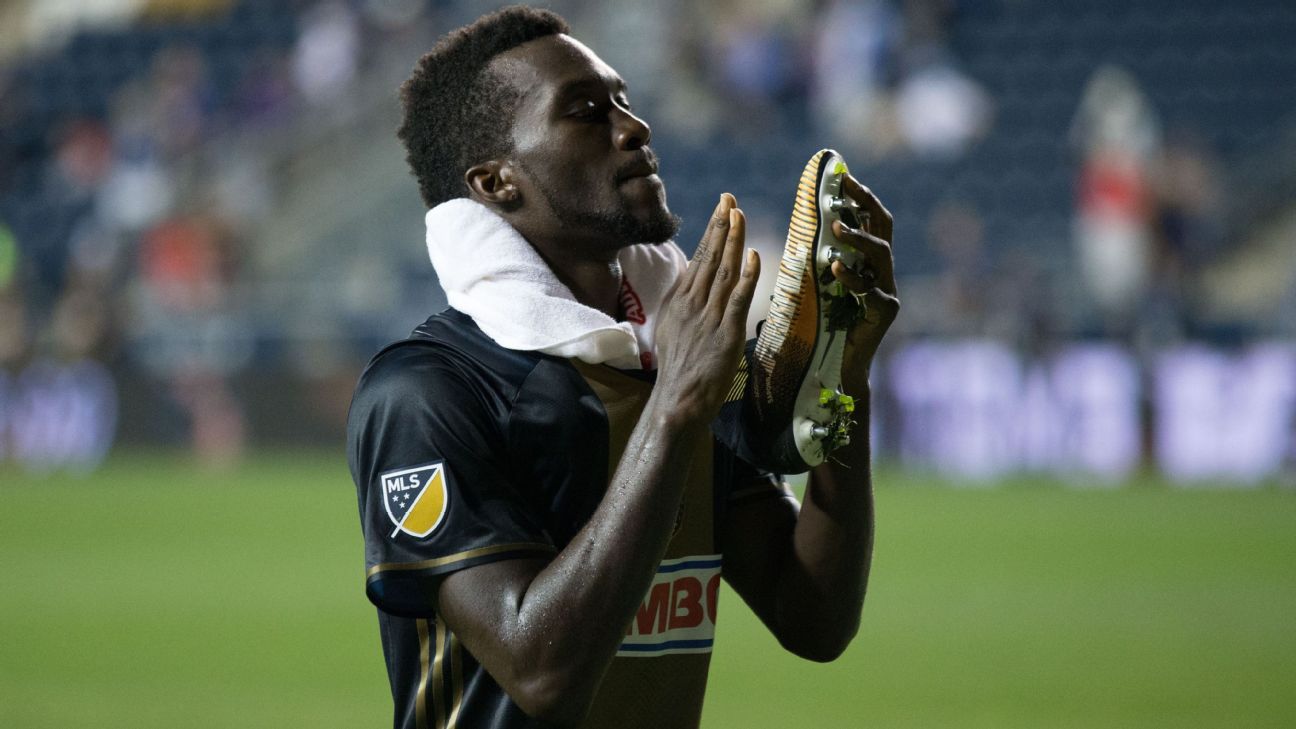 
FC Dallas had a goal ruled out following a video review — on the first night MLS implemented its new VAR system — and went on to lose 3-1 to the Philadelphia Union on Saturday night.

In addition to featuring the first review, the game also marked the first time the Union had even beaten Dallas in their eight-year history, after five losses and four draws.

Already trailing by three in the 79th minute, Dallas thought it had a goal back when Cristian Colman ran onto a through ball, and though his shot was saved by Union goalkeeper John McCarthy, it fell to Maxi Urruti to score.

But the play went to review because Colman made contact with McCarthy, preventing the keeper from reaching the ball before Urruti, and the goal was ruled out. The whole process took slightly less than two minutes.

C.J. Sapong had turned in a cross from Ilsinho in the 17th minute to put the Union ahead, and five minutes later Ilsinho doubled the lead by lashing the ball home from the top of the box.

The Philadelphia duo linked up again in the second half as Ilsinho had his close-range shot saved but cut the rebound back for Sapong to score.

After the review, Michael Barrios added a stoppage-time consolation goal for Dallas, which lost its second straight game and missed a chance to retake the top spot in the Western Conference.

Clint Dempsey had two goals and an assist to lead the Seattle Sounders to a 4-0 thumping of Minnesota United.

Dempsey, who matched Landon Donovan’s all-time goal scoring record for the U.S. national team last month, first delivered a through ball for Will Bruin to open the scoring in the ninth minute, before getting on the scoresheet himself with a header from close range nine minutes later.

Jordan Morris made it 3-0 in the 71st minute by running onto a long Nicolas Lodeiro pass and slotting through the goalkeeper’s legs, and two minutes later Dempsey was given time to pick his spot from 12 yards to net his second of the night.

Kofi Opare scored his first goal of the season as last-place D.C. United held MLS-leading Toronto FC to a 1-1 draw.

Opare made it 1-0 in the sixth minute by heading home following a corner. It was Opare’s third career MLS goal and first since May 2015.

Toronto tied it after Victor Vazquez played a long, arcing pass to Jozy Altidore in the area. His cross through a crowded box was deflected and Jared Jeffrey’s attempted clearance bounced off teammate Steve Birnbaum and into the goal for the equalizer.

D.C. United managed just four shots — one on target — and snapped a six-game losing streak, though it is still winless since beating Atlanta United on June 21.

Toronto, unbeaten in its last five, still enjoy a three-point lead atop the Eastern Conference.

The Chicago Fire took advantage of Toronto’s draw to close with two points of the lead in the East after a 4-1 win over the New England Revolution.

Matt Polster scored with the outside of his boot from the top of the box to give the Fire an eighth-minute lead, but Kei Kamara headed home after a set piece to equalise midway through the first half.

Six minutes before the break, Juninho restored Chicago’s lead with a shot from 20 yards after a Bastian Schweinsteiger dummy, and Michael de Leeuw headed in a cross soon after the action resumed to make it 3-1.

Luis Solignac danced through the Revs’ defense to add a fourth in stoppage time for Chicago, which snapped a three-game winless streak.

Anthony Jackson-Hamel scored in the 84th minute to rally the Montreal Impact past Orlando City 2-1.

Cyle Larin scored for the first time since May to give the Lions a 12th-minute lead. The Canadian striker missed three games in June while suspended after a drunk-driving arrest.

Ignacio Piatti drew a foul in the box early in the second half and converted the penalty to level the scored, before Jackson aimed a soft shot past Orlando keeper Joe Bendik for the winner.

Fredy Montero’s goal in the 76th minute lifted Vancouver to a 2-2 draw with Colorado.

Montero, who finished with three goals in July, picked up where he left off last month. He’s now scored nine goals in 21 appearances this season. Montero’s header off a free kick was the equalizer.

At the 72nd minute, Montero just missed and hit the right post with a soft tap from the center of the box.

Colorado went up 2-1 at the 54th minute on Kevin Doyle’s fifth goal of the season with Marlon Hairston and Mohammed Saeid assisting.

Hairston had a soft, no-look pass when he tapped the ball behind himself to a streaking Doyle who punched it in for the go-ahead goal.

San Jose has won two in a row after losing three straight. The Earthquakes have a four-game home win streak, their longest since winning six in a row in 2013.

Urena opened the scoring in the 42nd minute. Shea Salinas dropped a pass into the box to a charging Urena who cut inside to evade a defender and blasted it off the far post, into the net.

Wondolowski put away a cross from Tommy Thompson to make it 2-0 in the 56th minute. Thompson took a throw-in near the top-left corner of the box and raced toward the end line before finding Wondolowski who buried it in the top of the net.

Adam Jahn scored his first goal of the season in 76th for Columbus, which has lost three in a row.

Houston and Real Salt Lake played to a scoreless draw to keep their unbeaten streaks alive.

The Dynamo finished with just 10 men when midfielder Alex Lima drew two yellow cards in an 80-second span halfway through the second half.

Houston now has played to a draw in three of its last four games. It was the Dynamo’s second scoreless draw in the last month. The tie snapped the Dynamo’s three-game winning streak against Salt Lake.

Real Salt Lake, meanwhile, played to its third straight tie. The two teams each have played their last five contests without a defeat.