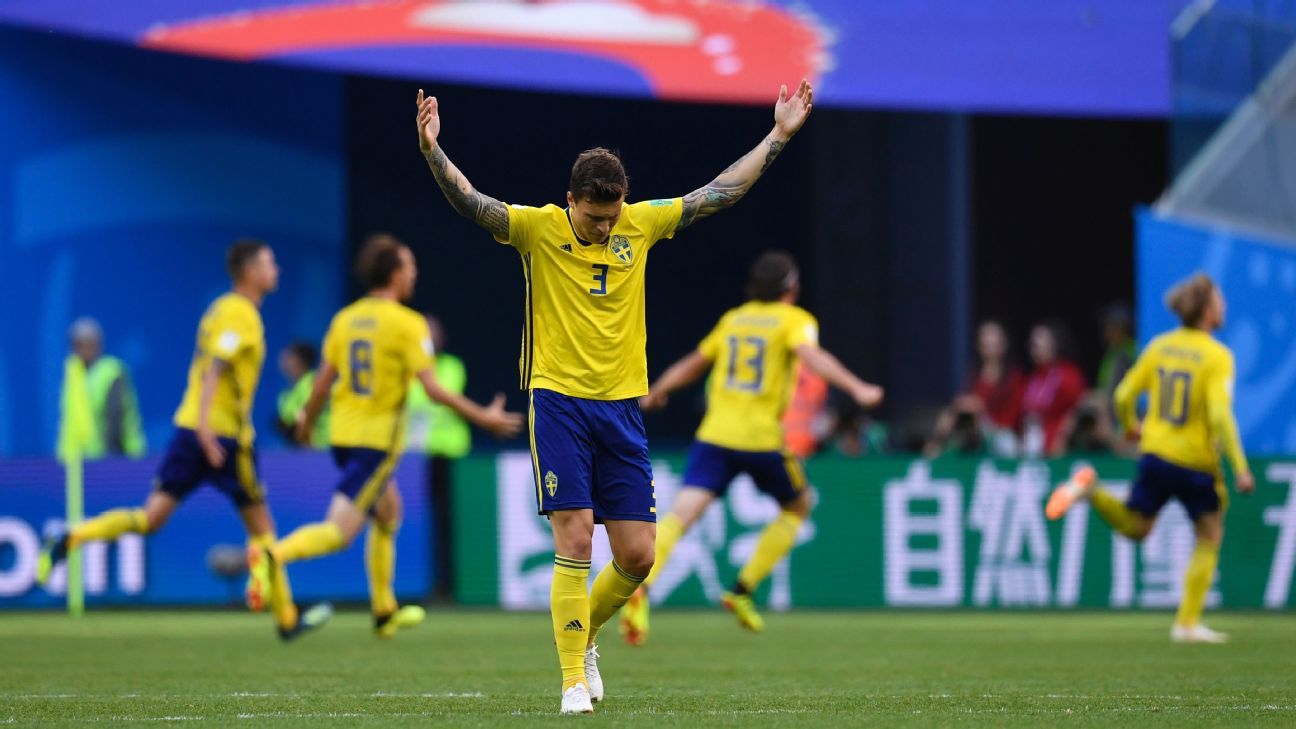 
In most Manchester United fans’ ideal XI for next season, defender Victor Lindelof doesn’t feature heavily. Yet he will likely start for Sweden against England in Samara on Saturday.

In fact, Lindelof (one of nine United players to reach the World Cup quarterfinals) was one of Sweden’s best players as they overcame Switzerland in the round 16, showing a maturity and authority not always seen for his club side.

Sweden kept three clean sheets (Lindelof featured in two of them) in their four games, with the 23-year-old Lindelof highly praised while against Mexico, he won every tackle he attempted without conceding a foul. Lindelof is as reliable as a Volvo for his country and he could be for United too, despite a shaky start to life in England.

Manager Jose Mourinho might still want to bring in another central defender, but United won’t want another close season of multiple transfers, a tactic which hasn’t worked in recent years. As Andreas Granqvist and Lindelof have shown for Sweden, a successful partnership takes time and stability; it doesn’t come from chopping and changing every five minutes. United’s finest, trophy winning sides have all had settled defences.

This summer, United have looked at central defenders around the world, from Uruguay’s Jose Gimenez to Belgium’s Toby Alderweireld, but the answer to their defensive issues may already be at the club. Lindelof just needs a regular foil, as he has had in Granqvist, and Eric Bailly looks perfect for the job: a Nemanja Vidic-like warrior to complement Lindelof’s Rio Ferdinand-esque ball-playing style.

The Swede built up a good relationship with Luisao at Benfica but at Manchester United, there are too many options, each with their own qualities and weaknesses. Chris Smalling and Phil Jones both feature regularly, as well as Marcos Rojo, while youngster Axel Tuanzebe is also highly rated and will battle for a spot.

It has taken time but after his £31 million move in 2017, Lindelof is finally ready to take charge of United’s defence.

Lindelof had a tough start in England as he adapted to a more physical game than he played in Portugal. He was poor on his debut against Real Madrid in the Super Cup and then didn’t start a league game until Newcastle at home in mid-November. His first real league appearance before that (not counting an injury-time run-out against Liverpool) was as a sub against Huddersfield, United’s first league defeat of the season.

After that Huddersfield game, too many fans and pundits were hammering him rather than supporting a young man playing his first significant domestic minutes in a new country. That didn’t help the confidence of a player dubbed “Ice Man” for his calmness at Benfica, but even after he acclimatised to his new surroundings he was never a regular. Lindelof started seven of United’s 17 league games in 2018 and didn’t start in the FA Cup beyond the fifth round.

For Sweden, it has been a different story. Lindelof bounced back quickly for his country after his error at Huddersfield, keeping things tight in two playoff games against Italy when Sweden didn’t concede a goal. And his performances in the World Cup are suddenly seeing him widely acknowledged as one of the world’s leading defenders.

“Victor has done the simple things well,” Bojan Djordic, one of five Swedish players who have also played for Manchester United, tells ESPN FC. “He hasn’t put himself in a situations that are risky or could be costly.

“He’s been mature. If the ball is there to be cleared he does that. If there’s a safe pass on, he sees it and starts the attack. He’s got an old head on young shoulders.

“The 4-4-2 formation Sweden use suits both our centre-backs superbly. Both the central midfielders work their socks off to kill the space in front of them and give them the best possible protection. That allows them to concentrate on things they are good at: Granqvist, the leader; Victor with his calm head and great reading and understanding of the game. Both have been magnificent in the World Cup so far.”

Lindelof is performing on the biggest stage for a team few thought would reach the tournament, let alone the quarterfinals. There will be plenty of United fans who don’t want to see him on the winning side against England because they’re English, but also because they will want him to return in plenty of time ahead of next season.

However, a deeper run at the tournament will only improve his stock further. Lindelof has already done enough to suggest that he will be a more regular starter for United in 2018-19, but Mourinho needs to put the same faith in the defender as his country does.