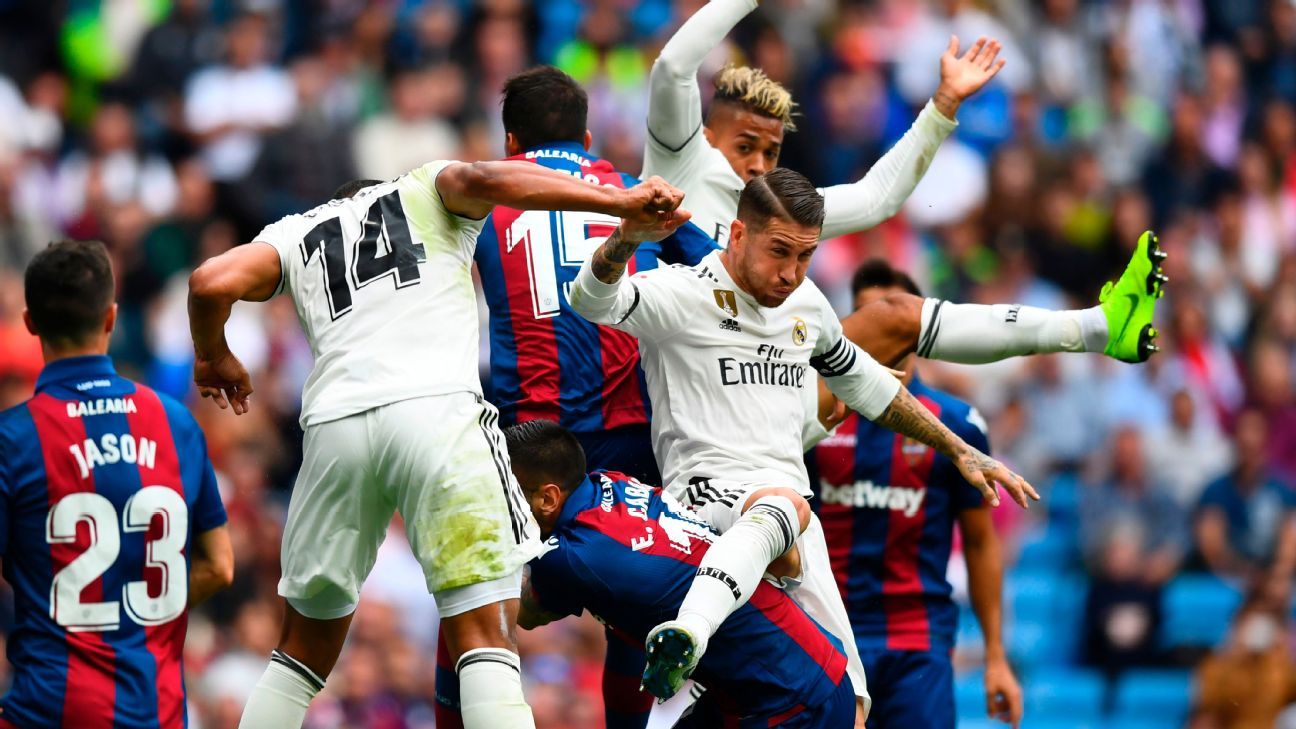 
Another embarrassment for Real Madrid coach Julen Lopetegui as his team went 2-0 down and made the second longest run without a goal (481 minutes) in their entire 116 year existence before Marcelo’s late consolation.

Madrid could claim some bad luck: two VAR decisions went against them, they hit the woodwork three times and had a late possible equaliser ruled out for offside. But this was a shambles of a performance, and president Florentino Perez could pull the trigger on Lopetegui even before next Sunday’s Clasico at the Camp Nou.

There were glimpses during the second-half comeback that at least showed Madrid do have lots of very good players, with Karim Benzema and Gareth Bale looking quality at times. But everybody already knew that.

Where do you start? Madrid looked short on ideas, inspiration and energy during a first half in which Levante were tactically and physically far superior. While the historic run without a goal understandably draws the headlines, Madrid’s biggest problems start in defence and midfield where their big-name players either do not understand or do not want to do what Lopetegui is asking of them.

2 — Just like most of the decisions Lopetegui has made since taking over last summer, the team selection backfired awfully. He looked a slightly bedraggled figure as he shook his arms and shouted on the sidelines.

GK Thibaut Courtois, 5 — Not directly at fault for any of the goals, but showed uncertainty every time a ball was played between him and the defensive line. His settling into the team is clearly not being helped by the general unsteadiness everywhere else.

RB Alvaro Odriozola, 6 — The €30 million right-back was promising in attack in just his third start for Madrid, while understandably a bit shaky in defence. Very unlucky to be the player taken off at half-time to allow Bale on.

CB Raphael Varane, 3 — Completely misjudged a straightforward long ball to allow Jose Luis Morales in for Levante’s opening goal, then his silly handball was spotted by referee and Roger Marti netted the penalty to make it 2-0. All inside the first 13 minutes. The rest of the game was not as calamitous, but it would have been hard to match.

CB Sergio Ramos, 4 — A 400th La Liga game for Madrid was among his worst. He was regularly given the run-around by Levante’s captain Morales and put in no bursts forward either. One of the many senior players who does not appear focused on his job at the moment.

LB Marcelo, 7 — Returning from a calf injury, Marcelo showed how badly he has been missed. He regularly got forward dangerously down the left, and ended the historic run without a goal with a well taken right foot effort from near the penalty spot.

CM Casemiro, 5 — A 100th La Liga game for the Brazilian was one to forget as he was unable to stop Levante regularly counter-attacking through the middle of the pitch. Hit the crossbar with a header at a corner at 2-0 but had little impact.

CM Luka Modric, 6 — The World Cup’s best player has still not got his season properly started, regularly misplacing even simple passes in his own half. Made an effort to turn things around by getting into shooting positions around the box, but didn’t trouble Levante goalkeeper Oier Olazabal.

CM Isco, 4 — Looked very rusty after a month out due to an appendix operation, although one clever disguised pass set up a half-chance for Modric just after half-time. No surprise to see him taken off on the hour mark.

RW Lucas Vazquez, 4 — Missed three clear chances when playing on the right wing in the first half, then contributed little when dropped to right-back after the break.

LW Marco Asensio, 5 — Clearly lacking in confidence at the moment, with just one goal in 12 club games this season. Almost got one back in the first half when forcing the ball over the line from a corner when Madrid were 2-0 down, only for VAR to correctly spot and give offside. He was taken off on the hour mark.

ST Mariano Diaz, 6 — A first ever La Liga start for the 25-year-old, who was eager to make something happen but unable to do so. Hit the woodwork with a flying header in the first half and did find net late on, but the flag was correctly up.

LW Gareth Bale, 6 — Acclaimed as a potential saviour as he came off bench at the break, Bale looked well below 100 percent after recent injury troubles. Had a number of half-chances as he forced Oier into flying save from free kick, and had a minor role in Marcelo’s first goal back. But was still not great.

ST Karim Benzema, 7 — Entered on the hour mark and immediately gave the team an extra level of class. He set up Marcelo for his goal, then shuddered a post soon afterwards with a 20 yard curler. Appeared troubled by a groin problem late on, adding to Madrid’s troubles.

CM Dani Ceballos, 6 — Surprisingly sent on ahead of Toni Kroos, he helped keep the ball flowing towards Levante’s goal during the late pressure.