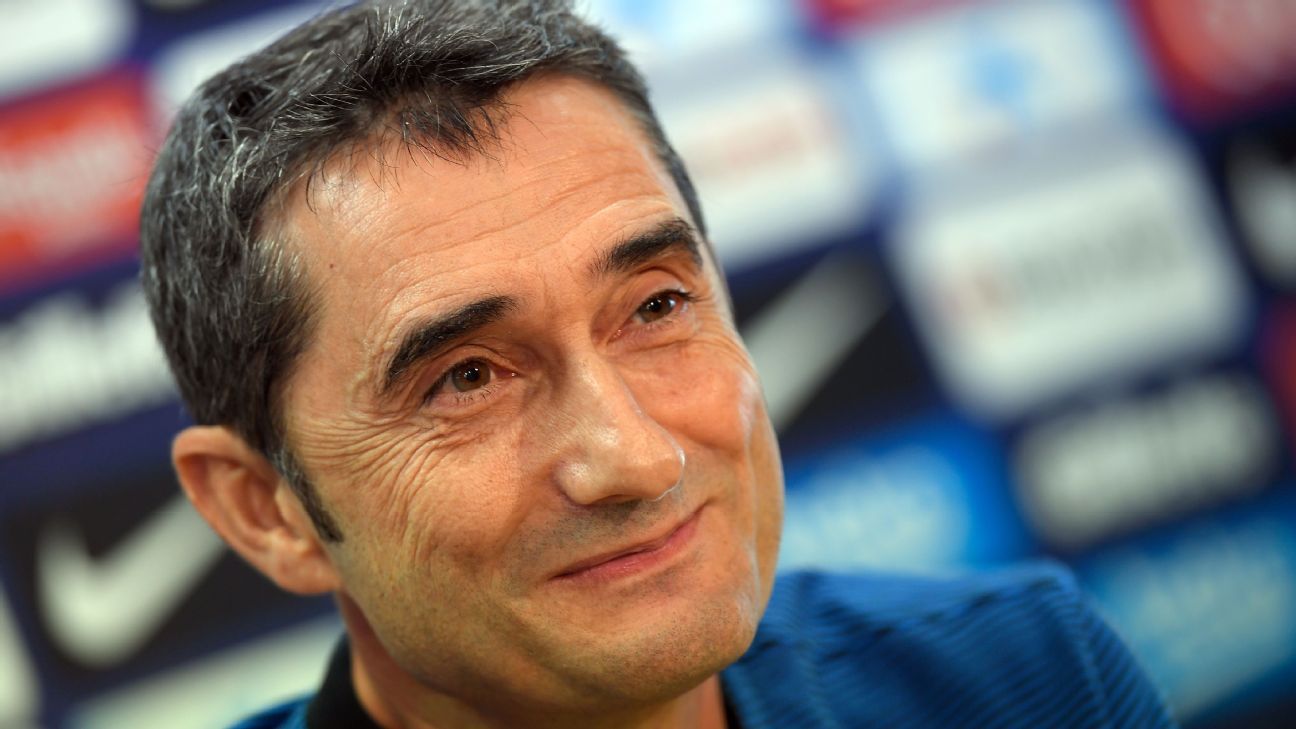 
Every time he’s been given the opportunity, Jordi Alba has purred about how things are going under new Barcelona coach Ernesto Valverde.

“This year we’re playing as a team,” the left-back said after the narrow win against Sporting Lisbon last month in a comment that was interpreted as a dig at former boss Luis Enrique by some Catalan media. “[All the players] are really involved. Valverde doesn’t get involved in what happens in the dressing room; it reminds me of the first year I arrived here.”

While Alba’s comments will no doubt be appreciated by his manager, what will please him more is the results that have been obtained since the Spanish Super Cup drubbing against Real Madrid in August.

On Saturday, Barca are back in Madrid, albeit for their first-ever trip to Atletico Madrid’s new Wanda Metropolitano home. They will hope, however, it doesn’t represent their first dropped points of the new season. Going into the top-of-the-table clash between two unbeaten sides, the Blaugrana are on a nine-game winning run and, while performances have not always necessarily convinced, there have been signs of what can be expected from the Valverde era.

Alba’s praise is interesting because it was not always clear how good the players’ relationship was with Luis Enrique. Aside from the Treble celebrations in his first year and the scenes after last season’s historic comeback against Paris Saint-Germain, there was always the nagging doubt that he didn’t get on with everyone in his squad.

Prior to winning the Treble, it was widely reported that his relationship with Lionel Messi, for example, was at breaking point. Only an intervention from Xavi Hernandez saved the season. And speaking last month, Jeremy Mathieu said that the former coach rarely spoke with his players.

Denis Suarez has also talked about the differences between the two coaches: “Valverde has a completely different personality to Luis Enrique. He is a clear thinker and is relaxed, which he has transmitted to the players from the first day.”

You get the feeling the players, buoyed by the calm installed of a winning run, are happy with life under their new coach.

Valverde, too, deserves a lot of credit because in rocky times — the sale of Neymar, failings in the transfer market, a vote of no confidence against the board and an unstable political situation that Barca have opted into — he has managed to keep things steady. While his news conferences give little away and aren’t headline generators, he’s been thoughtful, diligent and careful.

It helps that he has Messi in such fine form, of course. The Argentine already has 11 goals in just seven league games, although Valverde himself is unsure just how much influence he has over the forward’s brilliance — “I just put him on the pitch,” he said modestly last month.

While Valverde’s impact on Messi can be debated, what is clear is that the Basque coach has made changes in respect to last season.

The departure of Neymar has allowed him to involve more midfielders, while shifting Messi to a central position. It’s allowed glimpses of the best Andres Iniesta — “I feel reborn,” the club captain said last week — while Sergio Busquets has also commented on feeling more comfortable with a bigger support network around him.

“I’m a little more protected [now] and it’s true that I feel good, comfortable this season,” he said. “Midfield players can influence the game a lot and the more compact a team is, the better. On a personal level, it makes things easier for me.”

That has also seen Ivan Rakitic improve from last season, while Paulinho, a controversial summer signing, has been able to hit the ground running. There have been midfield contributions from Denis and Sergi Roberto, too.

A more solid midfield has had an effect in defence as well, where Barca have conceded just two goals in seven league games, while another slight change in respect to last season has been the disappearance of wholesale rotations. The days of nine or more changes look to be a thing of the past, which allows for Valverde’s team selections to feel more settled.

But there are more changes to come. Valverde’s limited rotating comes at a cost for a big squad. He’s confirmed he likes to work with a smaller group and hinted that 24 players is too many. There are already clear signs that some players — Paco Alcacer, Arda Turan and Thomas Vermaelen — will have to move on in January.

Those players, and others who may fall out of favour when winter comes, may provide a problem for the squad’s harmony down the line. There will be bigger tests to come on the pitch, too, starting with Atletico this weekend. But early signs suggest Valverde’s able to handle what’s thrown at him. Plus, he has a five-point lead over second place and a seven-point advantage over Madrid. It’s no wonder Alba’s purring.