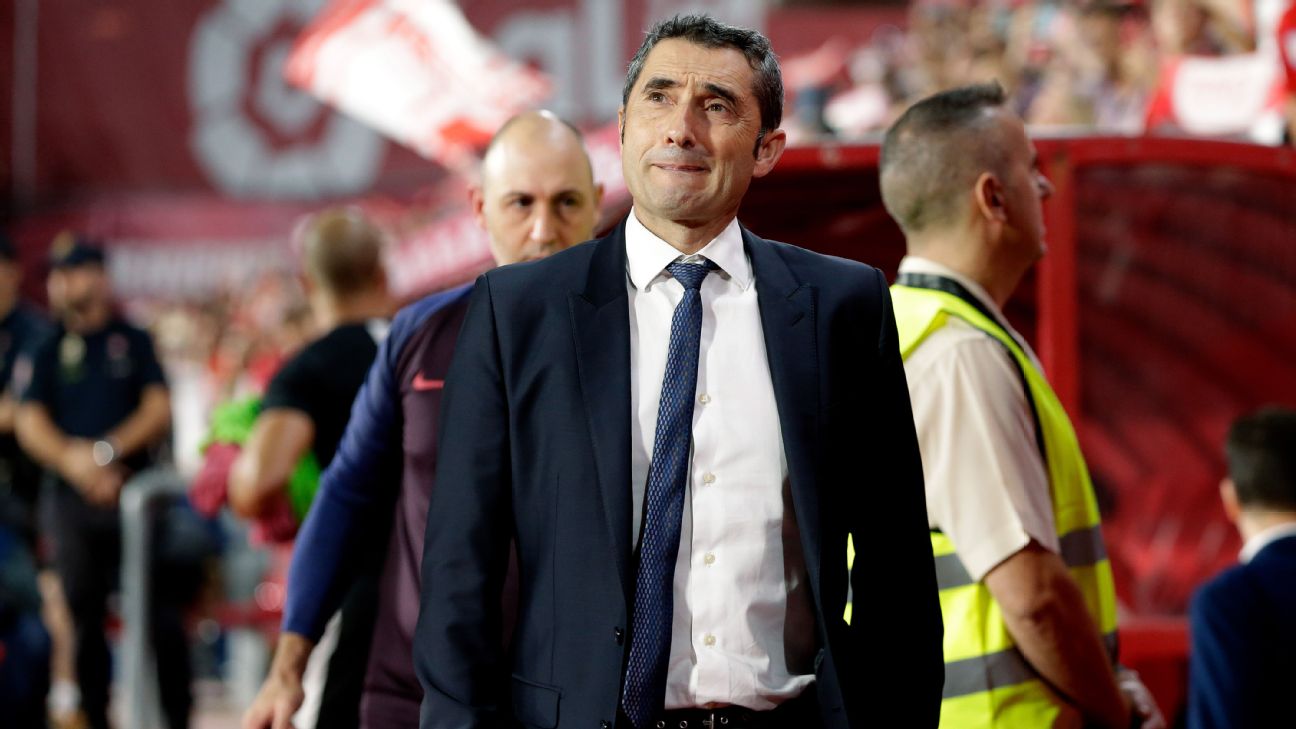 
Ernesto Valverde said Barcelona must respond on the pitch this week to emerge from the crisis which has enveloped them since Saturday’s shock defeat to newly promoted Granada.

Barca have made their worst start to a league campaign in 25 years. They have lost two of their five games and are without an away win in four matches in all competitions since the campaign began. They’re eighth in La Liga with seven points.

They host Villarreal on Tuesday and travel to Getafe on Saturday with Valverde under increasing pressure. Sources have told ESPN FC that some of the players have lost confidence in him, although president Josep Maria Bartomeu has no plans to sack him unless results continue to nosedive.

“This is how things are in the football world,” the Barca coach said in a news conference on Monday. “You are in crisis every three days and you can come out of it just as quick.

“That’s what we have to try and do now. The only way to calm things down is to pick up six points this week.”

Valverde has won back-to-back La Liga titles at Barcelona but his team’s performances in Europe have previously led to doubts about his future at the club.

He survived last season’s humiliating Champions League defeat at Liverpool and the Copa del Rey final reverse against Valencia. It has taken just six games of the new campaign, though, for the debate about his job to be reopened and he said he accepts the discussion is always going to be there.

“Results rule in the world of football and the coach is always in the spotlight,” he added. “That’s the position I am in — and have been from the start.

“Coaches have things on the line in every game, there is nothing new there. In previous seasons, we’ve always been much more consistent and had an advantage over the rest of the teams, but we’ve not started this season well.

“We have to look at this season to see what is going wrong, not last season [when] a lot of the [dropped points] came when we had already won the league. But even last season we had runs like this, when we only picked up two points from nine and we still went on to win the league because we overcame those bad spells.”

Ousmane Dembele is fit again for Tuesday’s visit of Villarreal and returns to the squad, with Carles Perez making way. Teenager Ansu Fati has also been called up for the sixth game running.

Ivan Rakitic, meanwhile, has been dropped, with Carles Alena brought back in.

“If Rakitic is not [in the squad], it is because someone else is,” Valverde responded when asked if there was a problem with the Croatia midfielder, who has started just once this season. “He hasn’t got an issue, it’s a question of players, we have a lot of options in midfield.”