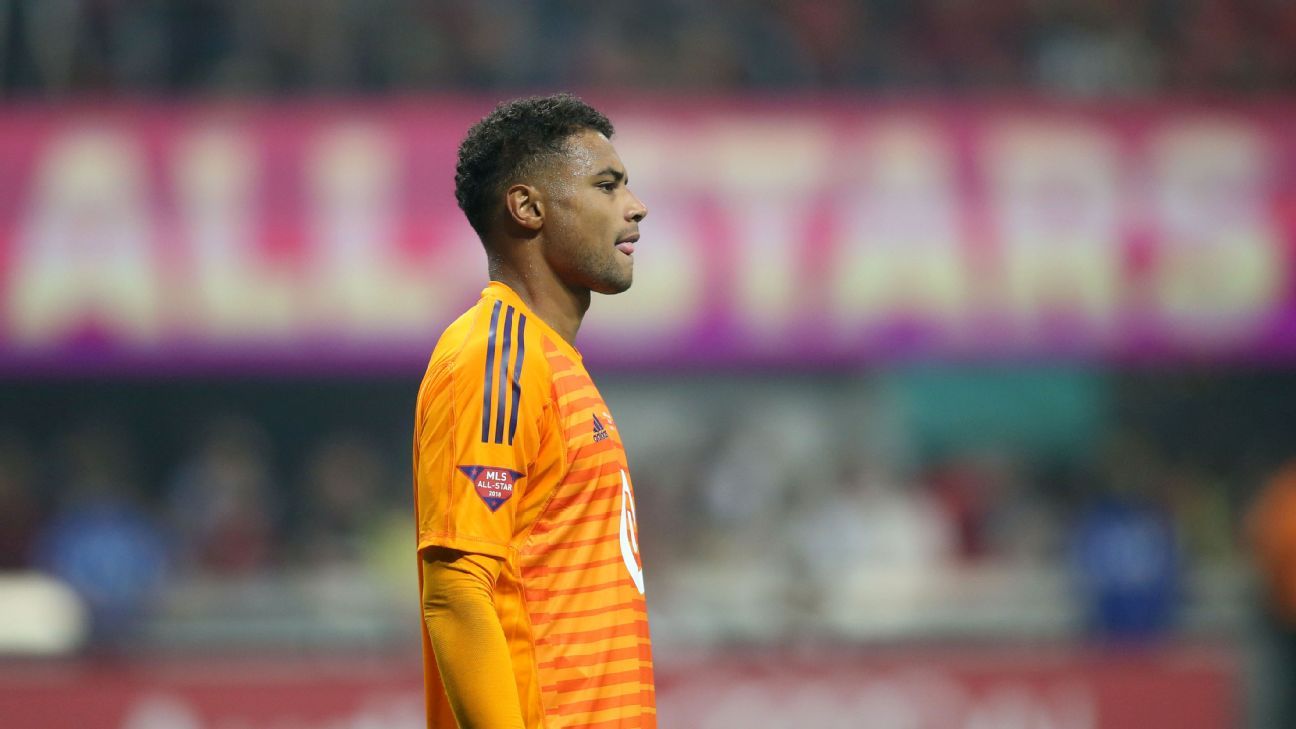 
At the beginning of 2018, Zack Steffen hadn’t played a minute for the United States men’s national team. At the club level, he had been a starter with the Columbus Crew for just a single season, and the team’s future in Ohio was very much in doubt.

Twelve months later, the Crew are saved, Steffen is the U.S. No. 1 goalkeeper and he has just completed a multimillion-dollar transfer to Manchester City that will see him head back to Europe in July. That’s enough to get a player named U.S. Soccer’s Men’s National Team Player of the Year, which was confirmed for Steffen on Tuesday.

On the eve of the announcement, Steffen chatted with ESPN FC about #SaveTheCrew, his former club manager Gregg Berhalter taking over the U.S. job and whether he will ever get between the posts for Manchester City.

ESPN FC: This year was a whirlwind for you. Can you put the experience into words?

Zack Steffen: I think you’ve put it in the best of terms. It’s a testament to hard work, dedication to your craft, being humble and using your support system when you need it to keep going through the ups and downs. You need to persist.

ESPN FC: What’s the best save you made this year?

Steffen: I would have to go with the double save against France in that game in Lyon. That knuckling ball, and then having to go low and get just a touch to keep it out.

ESPN FC: You got your first national team minutes in January against Bosnia and Herzegovina. What do you remember from that match?

Steffen: I remember that I wasn’t nervous. I remember just telling myself to go out and play the game. Have fun. Don’t do anything that I didn’t normally do. Just try to reach back and be calm. That’s exactly what I did.

Steffen: I mean, I know all the spots are up for grabs. We have a whole new coach and a whole new staff. It’s going to be a brand-new year. So, I do not. I think that’s the way I’ve been raised, to be humble, stay down in it and always train like it’s your spot to take and your spot to lose. I’m going to go into training with the attitude of building off this year, trying to get better, trying to push my teammates and become a leader.

ESPN FC: Can you take that spot?

Steffen: Yeah. I think it’s anybody’s spot to take. It’s open. Right now, every position is wide open. But I feel confident in what I’ve done. Those games and the camps have given me a good foundation to keep working hard and hopefully do well in the coming games.

ESPN FC: Gregg Berhalter was coach at Columbus and now he’s the U.S. national team coach. How does that change your relationship with him?

Steffen: Gregg’s great. I think it’ll change our relationship a little bit just because I don’t see him every day and joke around with him every day. He’s not out there pushing me every day. But at the same time, it’s going to be great. He has great respect for me and great respect for soccer in this nation. He’s a demanding coach, and I can see him being even more demanding with me than he was with the Crew. I’m ready for it. He’s going to bring in a plan and give us a character as a team and as a nation. I’m looking forward to seeing how it goes and what exactly he’s going to be like.

ESPN FC: Have you talked to him about this at all?

Steffen: Nah. We’ve only texted here and there, congratulations for each other and happy holidays.

ESPN FC: How good can this U.S. team be?

Steffen: There’s a lot of young talent. We’re very explosive, quick and powerful. I think we can use that to our advantage. I think Gregg will use that to our advantage. This year, we really needed a plan going into games, a style going into games. Personality. That was obviously tough when we had so many guys debuting for the national team. It’s nice to get this year as a foundation for the youth.

ESPN FC: Who’s your closest friend on the team?

Steffen: I have a lot of close friends. It helps that Wil [Trapp] and I are on the Crew together. We go to national team games together, and that’s great. Gyasi [Zardes] is a great guy, as well. Then we have Shaq Moore, Tim Weah, Kellyn Acosta. There are a lot. Ethan Horvath and Alex Bono. I could keep going. Tim [Howard]. Tyler [Adams]. That’s the good thing about this group: There aren’t really any big egos. Everybody is coming into work hard, and everybody is coming in to get better.

ESPN FC: A big story off the field was the “Save the Crew” movement. Where were you when you found out that the team was going to stay?

Steffen: I was in my hotel room in Tampa Bay when the U.S. was playing Colombia. I think I got a call from somebody or saw a tweet. I started making calls and checking Twitter. It was an awesome day. Before that, there were some times where you were caught thinking about what was going to happen next year. Gregg and the coaching staff did a pretty good job in helping us focus on soccer and the season because they are very detailed. But when that day came and the news broke, it was definitely a feeling of relief and happiness, for ourselves, but also for the fans of Columbus and the community. It was a testament to their dedication to us, the team and the community. They are the ones who did it in the end.

ESPN FC: What most excites you about moving to City?

Steffen: It’s a new opportunity and new challenges. I can look forward to that. Getting back over to Europe and playing at a little bit higher level, then hopefully becoming a leader for the national team.

ESPN FC: When did you first know they were interested in signing you?

Steffen: I knew in mid-August. That’s when it all started. David Rouse, a goalkeeping scout for Manchester City, came over for maybe a week in October. He was an awesome guy. He showed me what kind of club they were like. We talked about Manchester City. He watched me and watched a game.

ESPN FC: What’s that like, knowing that there’s a scout from one of the biggest teams in the world watching you play live? Were you thinking about him in the stands?

Steffen: Yeah, that was in the back of my mind. But at the same time, you just have to go out, play your game and not do anything that you’re not used to or uncomfortable with. They’ve scouted you. They wouldn’t be watching you if they didn’t like you and didn’t trust you. You have to keep playing and not think about it. Think about it afterwards. It worked out.

ESPN FC: You went to Freiburg in 2014. What did you learn about playing in Europe during that stint that will help you at City?

Steffen: When I was over there, I learned a lot about the style of soccer and the lifestyle. Off the field, I learned a lot about myself. I wasn’t ready at that time. I wasn’t happy. Coming back was a smart call. Now, I’m much more mature. I’ve had my stint at Columbus. My family has been right by my side throughout, and that’s exactly what I wanted. I found my happiness. I’m ready to head back over and take on the challenges. I don’t think it’ll be as hectic and hard this time.

ESPN FC: Have you spoken with Pep Guardiola?

Steffen: I have not. When I went over for meetings, I met a bunch of the coaches. I went out to dinner with the goalie coach and some of the other higher-ups. They are all great people, welcoming and caring. It’s great.

ESPN FC: The British press can be brutal. One recent headline was, “Zack Steffen is unlikely to ever play for Man City. So why did he join them?” What’s your reaction to that?

Steffen: Negative press is always going to come out. There are always going to be your supporters, and then there are going to be haters. I kind of laugh at them. I’m confident in my abilities and what I can do if I continue to work hard and focus. I don’t really care what other people think.

ESPN FC: City Football Group has clubs all over the world, and there has been some talk that you’ll get loaned out. Are you going there to play for Man City?

Steffen: Of course. I want to get there as soon as possible and compete. Or whenever that happens, I think I’ll be ready. And they know I’m ready to compete.

ESPN FC: Would you be disappointed if you weren’t on a Premier League roster next August when the season starts?

Steffen: I trust in Man City and what plans they have for me. So no, no, I won’t be.

Steffen: If everything works out and everything falls into place, anything can happen.

Steffen: I would love to be in Manchester on the roster. We’ll start with that.