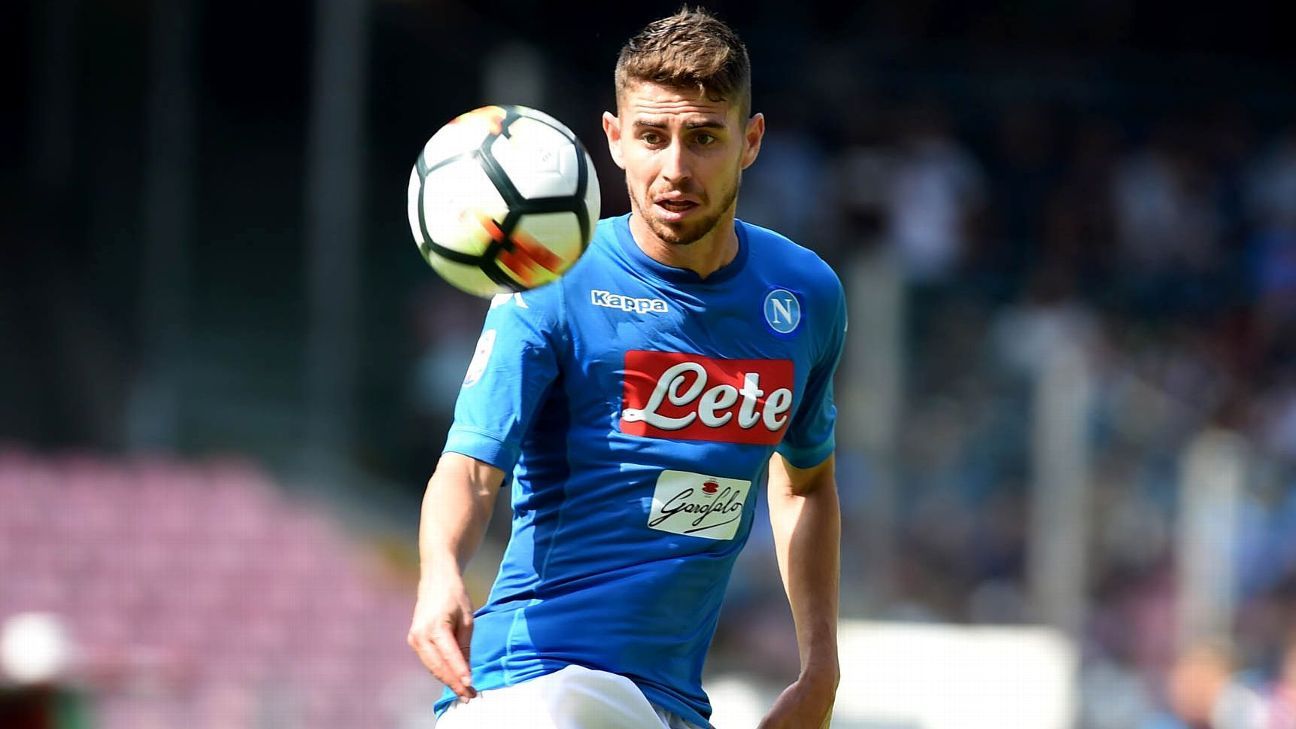 
Brazil coach Tite will be attending the Champions League fixture between Manchester City and Napoli on Tuesday, and his major task is clear. He knows all about Pep Guardiola’s Selecao stars Gabriel Jesus, Fernandinho and Ederson, but now a new name is about to enter the frame ahead of the World Cup. Napoli midfield star Jorginho has always wanted to represent Italy, and yet he won’t refuse an even more lucrative proposition.

“If Brazil call him up, he will accept it,” Jorginho’s agent, Joao Santos, said.

Most of the fans and pundits in Italy are furious over the potential loss of the best passer of the ball in Serie A. With the Azzurri desperately missing Andrea Pirlo, they know that Jorginho is the closest in style to the retiring maestro. Indeed, the Napoli metronome has beaten Pirlo’s record for the most touches of the ball, setting it at 218 in the game versus Verona in 2015. Jorginho also completed the highest-ever number of passes in that fixture (182), and frequently goes close to matching that figure. Napoli’s game virtually goes through him, and he is able to set the tempo and control everything. No player in Europe has completed more passes than him in 2017.

Jorginho: Has made more accurate passes (2024) than any other player in Europe’s top 5 leagues in 2017 pic.twitter.com/5lhbk9lPP1

When asked about his most difficult opponent, Roma’s Belgian star Radja Nainggolan replied: “I must name Jorginho, because it is very difficult to mark him out of action. He distributes the ball very quickly, and you get tired running after it. It takes a lot of energy to prevent him from executing his plan.”

It is a huge honour to get such a compliment from the Ninja, and Jorginho proved himself versus Roma again this past Saturday as Napoli won 1-0 in a crucial game at the Olimpico.

And yet, Italy coaches bizarrely chose to ignore Jorginho’s skills. Antonio Conte tried him twice as a substitute in friendlies, but controversially didn’t include him in the squad for Euro 2016. Gian Piero Ventura went even further — he openly declared that the star doesn’t suit him in the slightest.

“Jorginho is a good player, but there is no space for him in our 4-2-4 formation,” he said.

The thing is that Ventura’s tactical plan didn’t really work in recent World Cup qualifiers. Italy were thrashed 3-0 in Spain, couldn’t beat Macedonia at home and had significant problems in narrow 1-0 wins over the likes of Israel and Albania. The criticism has been harsh, and even the coach’s former assistant, Carlo Tebi, claimed that his friend is wrong: “Ventura thinks like a club coach. It is unthinkable to leave such a good player at home.”

Jorginho wouldn’t have had such problems if Giovanni Trappatoni had still been in charge of the national team. One of the greatest Italian coaches ever, Trappatoni spotted the midfielder’s potential back in 2013 when he played for Verona.

“He has brilliant feet, can play in various positions on the pitch and is very smart,” Trapattoni said, predicting a great future for the rising star.

Jorginho was indeed hugely influential for Verona, whom he helped to get promoted that year, but it took him time to prove his worth there, and his life story is quite unusual. His mother, Maria Tereza, was his first coach and the greatest force behind the development of his career.

She taught him to play on the beaches of Santa Catarina in Southern Brazil when he was a small kid. She convinced him to join an academy established by Italian businessmen at the age of 13, even though it was 180 kilometers from their hometown of Imbituma. She didn’t allow him to run away from the rather spartan facilities that lacked electricity and hot water. Eventually, she was delighted for him when agents sold the 15-year-old to Verona.

He stayed there on a weekly salary of just €20, and at times was ready to abandon the dream and go home. Rafael, Verona’s Brazilian keeper, was astonished to hear the story, took the youngster under his wing and advised him to work with his agent. At the age of 18, Jorginho was finally able to sign a real contract, but Verona coach Andrea Mandorlini didn’t know him. He didn’t follow him during loan spell at tiny fourth division Sambonifacese, either, and intended to get rid of him in the summer of 2011.

However, one of the directors, who knew Jorginho from his days in Brazil, convinced Mandorlini to give the boy a chance. The midfielder produced man of the match performance in one of his first fixtures, and never looked back. Over more than two seasons at Verona, he played in almost every position, but always preferred the role of the deep lying playmaker. Pirlo had always been his role model, and that is how he is used at Napoli nowadays.

The start wasn’t smooth after the club managed to beat Juventus, Milan, Liverpool, Chelsea and Zenit to his signature in January 2014, because Rafa Benitez didn’t find the best spot for him. Maurizio Sarri, on the other hand, made Jorginho the lynchpin of his plans. The partnership with Marek Hamsik proved to be sensational, making the €10 million fee paid for the Brazilian-born prodigy look laughably low.

“Sarri made me better. It is great to feel the confidence of the coach and my teammates. That means that I reached an important degree of maturity,” the 25-year-old confessed in the beginning of the season, stating that the team is ready to fight for the league title.

That is what they are doing, with the perfect record from the first eight matches.

Jorginho’s part in the magnificent start can’t be overestimated, but that wasn’t enough to convince Ventura.

“I have to respect his decision, but I don’t agree with it and don’t understand it,” the disappointed midfielder said.

With the hope gone, he is ready to make the switch and fulfil the dream that seemed impossible when he was younger — to wear the yellow shirt of Brazil at the World Cup.

This is why the game on Tuesday, with Tite watching closely, is one of the most important of his career. Jorginho is about to face Fernandinho, who fights for the same spot in the Selecao lineup, alongside Real Madrid’s Casemiro. The trio differ in style, and the Napoli star has a chance to convince the coach that his qualities should be taken into account. Could Brazil have found their own Pirlo?