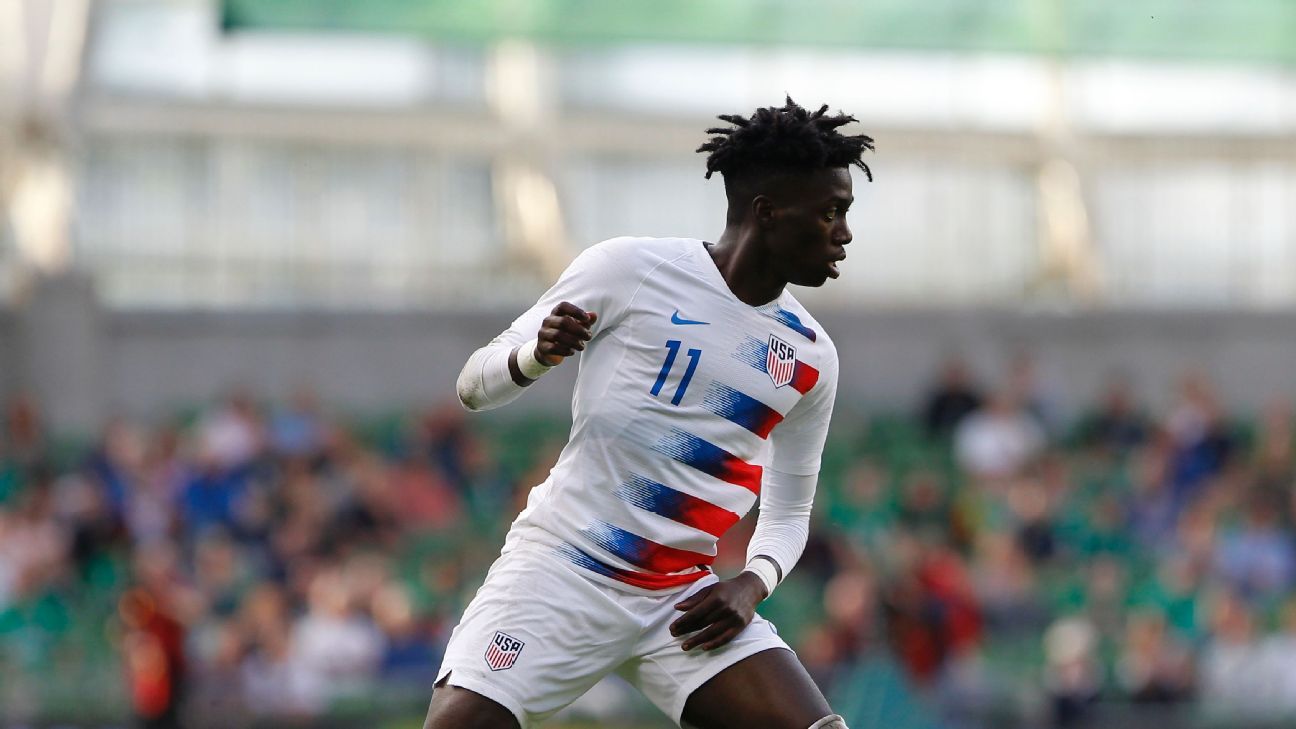 
United States and Paris Saint-Germain midfielder Timothy Weah is the son of the 1995 FIFA Player of the Year, but that’s not who he says got him into the game.

The 18-year-old calls former PSG, Milan and Monaco player George Weah his “chill parent” and says it was his mother Clar that deserves the credit for teaching him the basics and pushing him as a kid.

“She’s had a huge impact on where I’m at now,” Weah said. `She taught me the basics. She pushed me. She was my first coach, intramural coach when I was in Florida. That’s where I really started playing.

“[Dad] would just give me little pointers. He was more of the chill parent, just sitting back, relaxing, enjoying his time. He gave me some key pointers, some really important pointers that I use … like an easy way to score would be to shoot across the goal.

“He taught me that, and now I use that a lot. Just simple cutting moves, just changing the point of direction where you’re going — stuff that he did when I was playing.”

Tim Weah made his senior club team debut in March with PSG, dad’s club from 1992-95, and after the Ligue 1 title was clinched got his first start last month on the final day of the season.

Now he is back in France with the U.S. national team preparing to play some of his PSG teammates like Kylian Mbappe, Presnel Kimpembe and Alphonse Areola in a friendly against Les Bleus on Saturday in Lyon.

He says his teammates know who his father — also the current president of LIberia — is, but quickly adds they care more about how Tim plays than they do about what his dad did during his career.

“So I feel like being with such a great group of guys who accept me for me and how I play, I feel it’s awesome, and that’s why I click so well with them. I just came in, didn’t have a big head, I stood in my little corner and just learned, and now I feel like I’m one of them. So next year is going to be really fun.”

Weah scored a hat trick against Paraguay last fall in the round of 16 at the Under-17 World Cup, made his U.S. senior national team debut in March against Paraguay, then scored against Bolivia on Memorial Day. He also said he hopes to score on some of his teammates in the friendly against France.

After scoring against Bolivia, he praised Antonee Robinson, whose pass helped lead to his goal, saying: “I love him.” He termed the crowd of 11,000-plus “insane for a young guy. I wanted to play my heart out for them.”

He also predicted mom was screaming while watching on television and said dad probably was viewing in the middle of the night from Liberia. Tim remembered his reaction when told he’d be getting his first U.S. start.

“Those are the first two people I called, my parents,” he said. “They were really happy. They told me to keep my head and just go out there and play: We love you and just do your thing. We know you got it.”

When he returns to  PSG at the end of the summer, it will be under a new coach, with Thomas Tuchel replacing the outgoing Unai Emery. Tuchel isn’t afraid to give youth a chance, having promoted 17-year-old American midfielder Christian Pulisic to Borussia Dortmund’s first team.

At some point this year, Weah also could get a new national team coach to replace interim boss Dave Sarachan as the new-look U.S. tries to put last October’s loss at Trinidad and Tobago that eliminated them from the World Cup behind them.