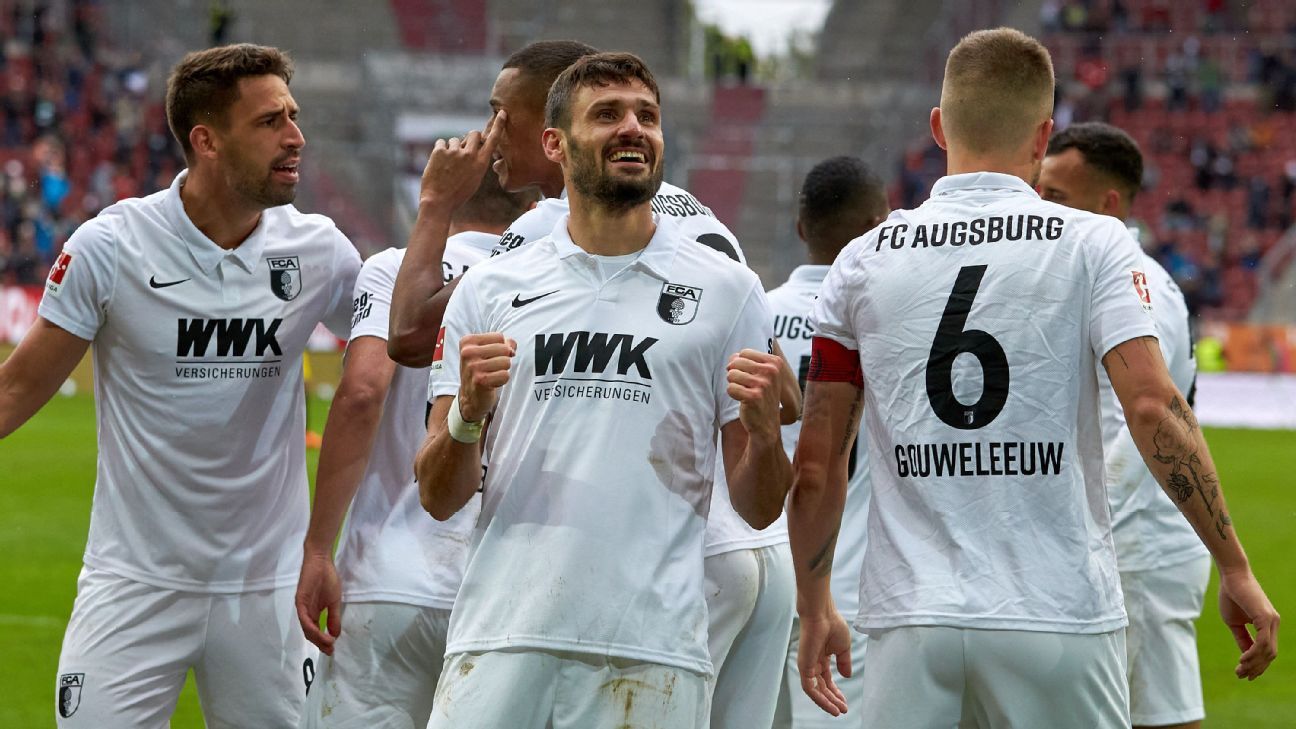 
Students of European history will be familiar with the Augsburg Confession of 1530, one of the most significant documents of the Protestant Reformation that swept through swathes of the continent at the time. Well, I’m here to make my own Augsburg Confession, which has nothing to do with religion, apart from perhaps spreading the gospel about the local Bundesliga team from that pleasant Bavarian city.

Quite simply, I need to stop underestimating the Fuggerstaeder, as they’re affectionately known. This nickname refers to the wealthy Fugger family who made their money in weaving, merchandise and silver mining but are perhaps best remembered for in 1516 creating the Fuggerei, the world’s oldest social housing complex, still in use in a walled enclave within the city limits.

FC Augsburg have a suitably down to earth quality about them, residing in modest surroundings compared to Bayern, Borussia Dortmund and their opponents on Saturday, fellow-table toppers, RB Leipzig (Stream live at 9.30 a.m. ET on ESPN+). But FCA, for all their humility, are one of the Bundesliga’s great achievers of recent years.

Achievement comes in many forms and, with gallows humour in full view, when the club secured a 10th straight year in the Bundesliga back in June, the players celebrated by donning T-shirts displaying “La Decima” — a take-off of Real Madrid‘s 10th Champions League success in 2014. When, against all odds, Augsburg made it to the Bundesliga for the first time in 2011, expectations were low but they have continually found ways to prosper thanks to clever money and personnel management as well as resourceful football. The key figures in the club’s unlikely success, staying up year in year out, are easy to identify.

Under Markus Weinzierl’s astute coaching, Augsburg finished eighth in 2013-14 and then a stunning fifth the following season, securing a Europa League place and ultimately a pair of close-run knockout-stage meetings with Liverpool. Unfortunately for FCA, Weinzierl left in 2016 for the allure of a bigger stage with Schalke.

But the real rock has been 1990 World Cup winner, Stefan Reuter, who spent last weekend in Italy celebrating that national team success with his erstwhile comrades. Reuter, Augsburg’s diligent general manager, can reflect on a job very well done in nearly eight years running the Fuggerstaeder.

Derek Rae, ESPN’s TV voice of the Bundesliga, is here with his latest Bundesliga column, this time focussing on unlikely Augsburg, who continue to punch well above their weight.

In Reuter’s early days with the club, he was refreshingly told by then-president Walter Seinsch not to worry about relegation. There was no pressure and it was inevitable they would go down at some stage. Yet since winning promotion, they have always achieved the Klassenerhalt (preservation of status). Granted, close shaves with the drop last season and the one before has been the story for Reuter and his staff. But in each case, he has had the courage to make a bold coaching change with the campaign ebbing away: replacing Manuel Baum with Martin Schmidt in April 2019, and then Schmidt with Heiko Herrlich this past March just before the COVID-19 pandemic struck.

Herrlich made headlines by missing the club’s first game after the enforced two-month shutdown due to a misguided visit to a supermarket when players and staff were meant to be in a quarantine camp. But the likeable coach, who won the Champions League as a player with Dortmund in 1997, got his team sufficiently organised to ensure a strong enough finish and Bundesliga survival.

Before the club’s last game, a 0-0 draw at Wolfsburg, Augsburg announced that Herrlich would be absent from the technical area due to a collapsed lung. After 11 days of hospital care, including an operation, Herrlich has been given permission by doctors to resume his duties this weekend although he has promised not to shout as loudly as usual.

His players have made plenty of noise to be fair, showing an unconditional commitment to watertight defending combined with a clinical ability to convert the relatively few chances that come Augsburg’s way. Possession without meaning is not for FCA; in two of their three matches, club has had less than 37% of the ball.

Oh, and these guys can work and run hard! They cover more ground then anyone in the Bundesliga, recording remarkably consistent numbers between 122-124 total kilometres in every match this season. You know what you’re getting with Augsburg, but can you beat them?

In the wins against Union and Dortmund, they rode their luck at times but kept errors to an absolute minimum. Similarly, in the 0-0 draw at Wolfsburg, it was again backs to the wall but an inner confidence within the team saw them gain an acceptable point.

Germany’s top division is on ESPN+. Can Bayern Munich stay on top or will the likes of Borussia Dortmund and RB Leipzig take over?
ESPN+: Live games and replays (U.S. only)
Bundesliga home | Schedule | Standings

Continuity of selection has been important too, starting with the same goalkeeper and back four in every match. The inspirational Rafal Gikiewicz between the posts, ably supported by Raphael Framberger, Jeffrey Gouweleeuw, Felix Uduokhai and Iago. Centre-back Uduokhai, who scored the opener against BVB, has been the best of a very able bunch and, at 23, you just feel he’s with the right club to push his career on to the next level.

Tactically there are no frills. It’s an old fashioned 4-4-2 with everyone knowing his responsibility. The addition of Daniel Caligiuri from Schalke has given Augsburg a wily fox of a footballer who remains one of the finest dead-ball deliverers in the league at 32.

FC Augsburg with seven points from three matches are off to their best ever Bundesliga start. Will the run continue in the Saturday summit meeting with slick Leipzig? It’s going to be enjoyable finding out.

Mbappe needs to end Champions League drought if he’s to remain on course for massive 2021 — at PSG or elsewhere
Real Madrid topple Barcelona in Clasico as Zidane ‘out-recycles’ Koeman to turn the match
Ziyech and Werner propel Chelsea to confidence-building win at Krasnodar with 8/10 performances
Arsenals Ozil backs Rashfords campaign provides free meals to students in London
Ronaldo to miss Messi showdown, out of Juventus vs. Barcelona