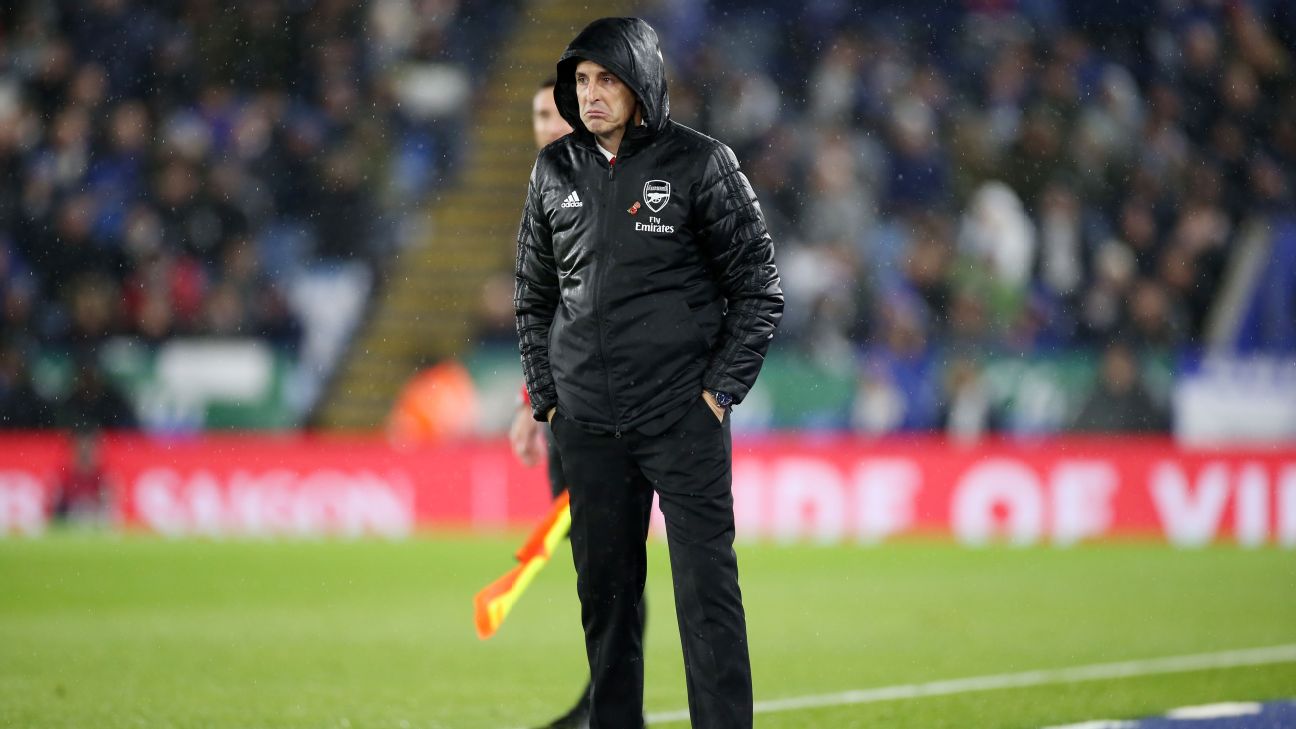 
Arsenal fell to their third Premier League defeat of the season as Leicester’s second-half surge secured a 2-0 win for the hosts at the King Power Stadium.

After a goalless opening 55 minutes, in which both sides had chances, Pierre-Emerick Aubameyang had a goal chalked off for offside, which was the cue for Leicester to take charge. Jamie Vardy opened the scoring and then laid on a second for James Maddison.

The form and confidence of Mesut Ozil will please many fans, and perhaps even his manager Unai Emery. Playing in an advanced central role, Ozil looked dangerous and creative, providing some consolation to those who have been calling for him to be more involved in recent weeks.

Hector Bellerin returned for the first time in 10 months and showed some signs of rustiness; he will improve with game time, though. Of greater concern, beyond the fact that Arsenal are winless away from home in the league since opening day, will be the sheer number of fouls conceded in dangerous areas, which demonstrate how Arsenal’s midfield struggled to control the game from central positions.

6 — Ozil apart, there was another experimental formation from Emery and while a defensive back three did appear more solid initially, old frailties were exposed as the game wore on. The defence was not helped by the lack of midfield support, as Guendouzi and Torreira found themselves outnumbered on numerous occasions.

GK Bernd Leno, 6 — The German stopper had a mixed afternoon. While he was quick to deal with crosses, his distribution was suspect on occasions. Additionally, Leno may feel he was slow to get across his goal for Vardy’s opener.

DF Hector Bellerin, 5 — Endured a tough first half, playing his first league game in 10 months. He was often not helped by his teammates, but stray passes throughout the game showed his rust and lack of match fitness. When going forward, however, he looked more assured.

DF Rob Holding, 5 — Another difficult match for the central defender, who was slow to react on a couple of occasions, with one incident almost leading to a goal. Arsenal’s move to a back three doesn’t appear to have made Holding any more comfortable.

DF David Luiz, 6 — As we have come to expect, the Brazilian’s distribution was exemplary and playing in a defensive three appeared to suit Luiz, who can look more exposed when only playing alongside one other centre-back.

DF Calum Chambers, 6 — Arguably Arsenal’s best defender throughout the first half, but the second period brought greater challenges and he failed pick Vardy up for Leicester’s opening goal.

DF Sead Kolasinac, 6 — Much like his full-back partner, Kolasinac was guilty of giving the ball away cheaply and too often was caught out positionally. In an attacking sense, he added width and linked up well with Aubameyang.

MF Lucas Torreira, 6 — A shaky evening from the holding midfielder, who was guilty of giving away free kicks in dangerous areas too often. Likewise, his passing was loose at times, as Emery’s midfield pair struggled to control the game.

MF Matteo Guendouzi, 5 — Wasteful in possession at times and perhaps fortunate in the first half not to give away a penalty for pulling back Soyuncu from a free kick. A bad display from Guendouzi.

MF Mesut Ozil, 7 — The opinion-splitting German playmaker showed his creative best in spells, linking with Arsenal’s two forwards in a No. 10 position that provided the 31-year-old with freedom and creative licence.

FW Pierre-Emerick Aubameyang, 7 — The prolific forward was incredibly influential early on. Not content to simply wait for the ball, the Gabonese star was running down the channels, as well as dropping deep to assist in the build-up play. A good outing from Arsenal’s most potent goal threat, who had a goal denied in the second half after being ruled offside.

FW Alexandre Lacazette, 6 — The French international could have done a bit better with a couple of half chances. He, Aubameyang and Ozil look to have potential as a forward trio, but the second half of this game highlighted that they need more time to truly flourish.

FW Nicolas Pepe, NR — Replaced Holding at 2-0 as Emery abandoned his back three, but Pepe made little impact.

MF Joe Willock, NR — Came on for Torreira in the closing minutes.