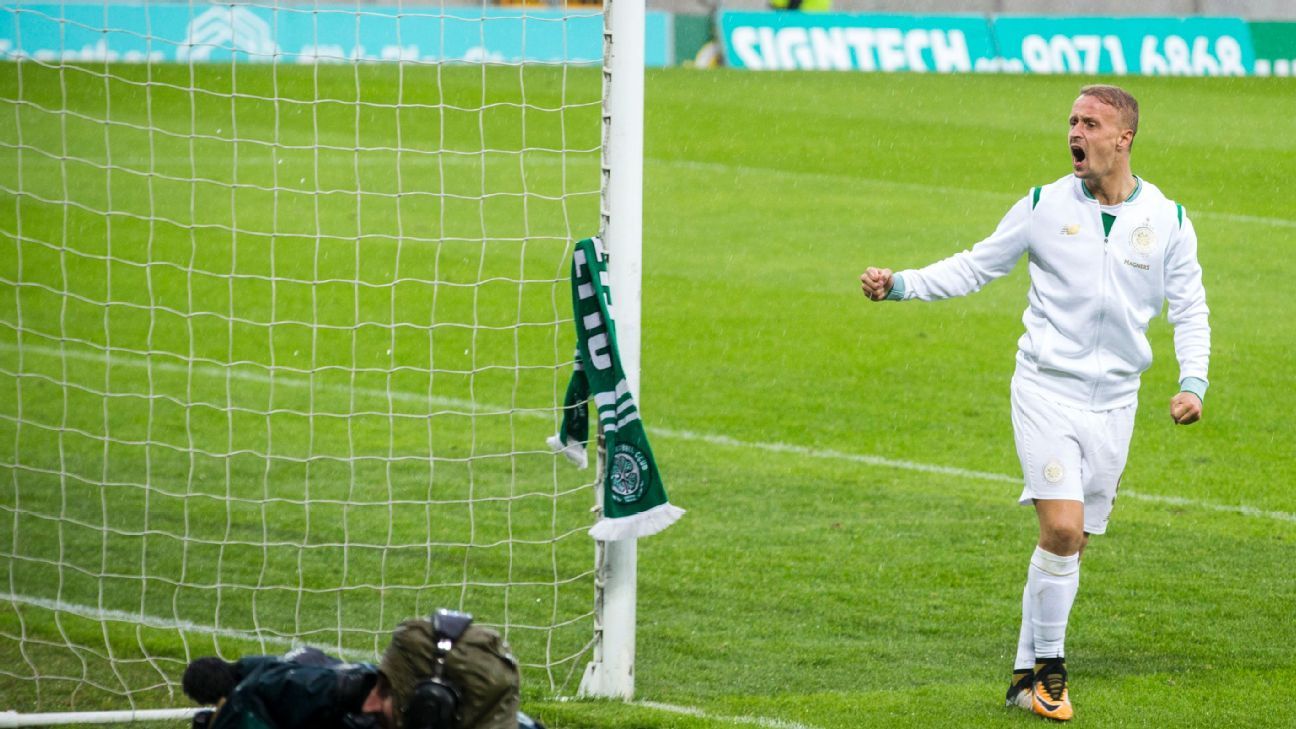 UEFA has opened a case against Griffiths over his actions at the end of Celtic’s 2-0 Champions League win at Windsor Park on Friday.

The Scotland international, who was earlier pelted with missiles including a glass bottle, tied a Celtic scarf to a goalpost.

The European governing body has also instigated disciplinary action against Linfield over their supporters’ behaviour, and Celtic for their yellow card count.

Celtic boss Brendan Rodgers expressed concern for player safety after the highly charged encounter, which had been moved back to avoid clashing with Orange Order parades on July 12.

Griffiths was booked by Spanish referee Alejandro Hernandez, presumably for wasting time, as he dodged coins and bottles while trying to take a 64th-minute corner. He had already cleared some missiles off the pitch before picking up a glass wine bottle, which narrowly missed him.

The 26-year-old was soon substituted but Jonny Hayes was also the target of missiles when taking corners at the same side of the pitch.

Griffiths tied a scarf to a post in front of the stand Linfield reserved for about 300 Celtic supporters who managed to buy tickets despite their club refusing their allocation. The former Hibernian player has also done the same thing at Ibrox in front of the celebrating visiting section.

One Linfield fan ran on to the pitch before being apprehended while others threw missiles and clashed with police and stewards. Officers with riot gear and dogs lined up in front of the section from where the missiles had earlier been thrown.

Griffiths’ yellow card was one of five which Celtic received and the UEFA charge confirms that it will not be revoked. Teams are automatically charged with “improper conduct” when they receive five or more bookings in a European game. Jozo Simunovic, Scott Brown, Tom Rogic and Stuart Armstrong were also cautioned.

All charges will be dealt with by UEFA’s control, ethics and disciplinary body on July 20.

The regulations on player misconduct state that Griffiths can expect a suspension of one match or longer if he is found guilty.

UEFA’s announcement came after Police Scotland urged fans to focus on football ahead of Wednesday’s return leg at Celtic Park.

Superintendent Craig Smith said a “robust policing plan” had been put in place following co-operation with the Police Service of Northern Ireland.

He added: “Anyone who is intent in causing disorder or hate crime can expect to be arrested by police. Let’s keep this match focused on the football.”

Linfield have urged their 1,500 travelling supporters to “do nothing to harm or damage the name of the club you are supporting.”

The Northern Irish champions had earlier condemned the missile-throwing supporters after the first leg of the second qualifying-round tie.

A statement in the wake of the game read: “The club will be reviewing our own footage and investigating an incident that took place during the match where a number of objects were thrown on to the pitch. We are obviously very disappointed that a small number of people chose not to respect the club’s wishes.

“Linfield FC strongly condemns these actions and will be taking all necessary steps to identify any individual who was engaged in this activity. The club takes the safety of fans, players and officials extremely seriously and there will be serious and lasting consequences for anyone involved.”