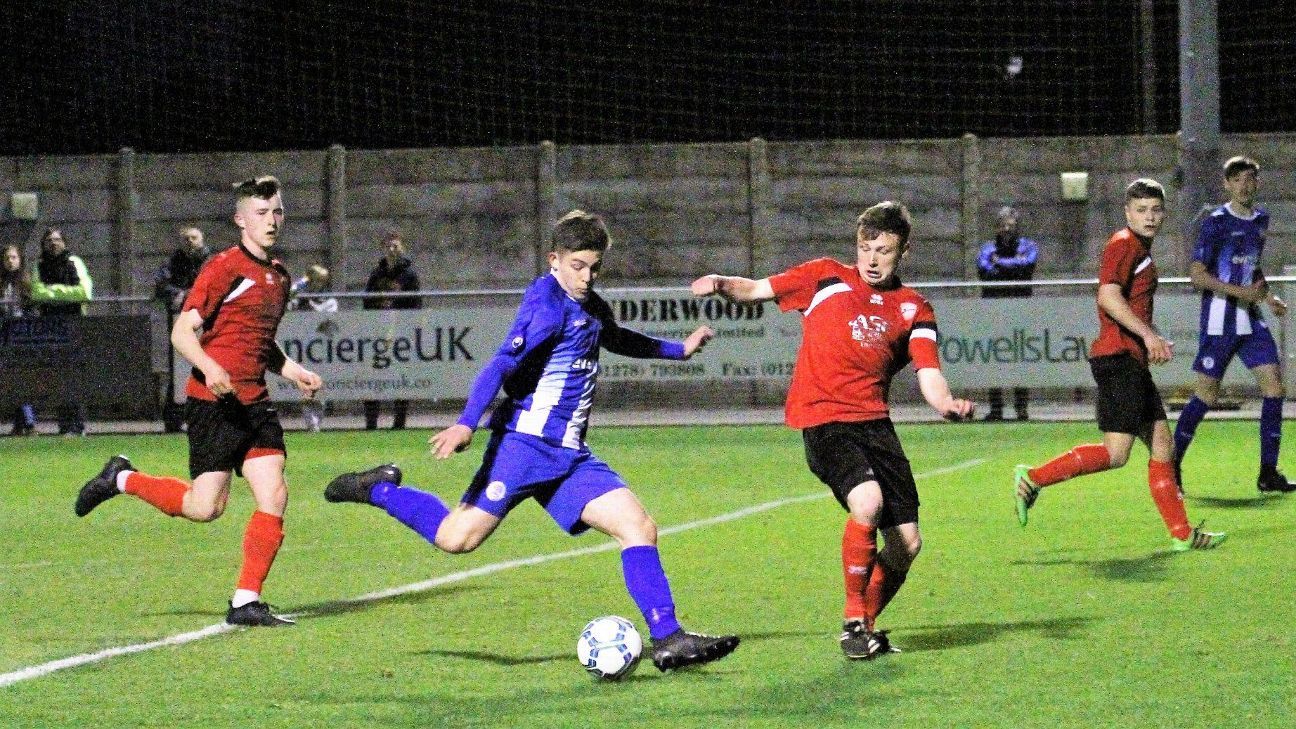 
For a club that has invested heavily in their Academy structure, it was a surprise when Manchester City were dumped out of this year’s UEFA Youth League, the under-19s equivalent of the Champions League. Last season, they went all the way to the semifinals in Switzerland before losing to eventual winners Barcelona in a 5-4 thriller. But while it was a shock for them to fail to make it out of the group stage for the first time since the tournament was inaugurated, defeat in this season’s domestic FA Youth Cup would be seismic.

To put the gap into perspective, while City’s under-19s were rounding off their disappointing European campaign with a 2-1 victory over TSG Hoffenheim last week, the bulk of Clevedon Town’s squad were still in school.

Later that evening, some of them made the 30-mile journey to Radstock Town, a small town of 8,000 people, where they were beaten 3-2 in front of a handful of parents and friends. Now, they’re preparing for a side that features potential superstars of the future such as England under-18 international Keyendrah Simmonds and Spain under-17 defender Alpha Dionku.

It’s not only the biggest games the youth team has ever faced, but one of the biggest in the club’s history. In Clevedon Town’s 138 years, the senior team have only ever reached the first round of the FA Cup once, losing to Chester City 12 years ago in front of a crowd of 2,261. Wednesday’s game against City will go close to that record attendance at the tiny Hand Stadium, with more than 1,200 tickets already sold and another 500 expected.

“Usually for the under-18s we get about 30 or 40 but since the draw the social media has exploded — there’s a proper buzz around the town, it’s unheard of,” manager Alex White told ESPN FC.

“It’s a once-in-a-lifetime opportunity and we just want to make the most of it, gracing the same turf as a team from one of the best academies in world football, in my opinion.

“It’s incredible, the players will be able to say I played against this player or that player: it’s a great story to be able to tell in a few years. I’m really excited for them.”

The two clubs could hardly be more different. In Manchester, at the £200 million state-of-the-art Etihad Campus, City youngsters enjoy some of the best facilities in the world, ensuring that everything is done with a view to helping develop their talent. They train daily on their own Academy pitches — within sight of Pep Guardiola and his first team — take advantage of the elite high-performance development facility and receive a top education at leading Manchester school St Bede’s College. Many already have agents and sponsorship details.

Clevedon’s youngsters, meanwhile, meet up for two three-hour training sessions on the 3G pitch next to the stadium, work out at the adjoining gym and play midweek youth team fixtures against local teams even though many have already broken into the first team.

Despite those disparities, they both share an eagerness to develop young talent. While City have high hopes that players such as England under-18 World Cup winner Phil Foden can become a first-team regular and lead the hunt for Premier League and Champions League silverware, White wants to see some of his players earn a chance at the National League level or further up the football pyramid.

“Everyone from the chairman down to the tea man has bought into the philosophy that we want to promote youth team football. Our first team has an average age of about 20,” he said. “Six of our current under-18s are in our first team and it’s a model that works for us.

“We’ve constantly got scouts watching our players. We’ve got a lot of interest in some of our lads and I think it’s only matter of time before some of our players are offered professional contracts.”

Clevedon have already seen off a number of bigger clubs on the way to their dream third-round fixture, beating Conference sides Bath City and Aldershot Town, although they only got past Sutton United after the Surrey club were ejected after fielding an ineligible player.

While the odds are overwhelmingly stacked against Clevedon, the players are determined to make the most of the fixture and have been watching videos of their opponents to get ready for the match.

“None of the pressure’s on us so we’ll just give it our best shot,” said captain Mitch Osmond. “Watching videos of them probably wasn’t the best idea! We know what to expect now and they’re very, very good.

“It’s just going to be surreal walking out from the changing rooms onto the pitch. We’ll give it a good go, better than most people will think.”

The trophy will have a new name on it this season after Chelsea — winners in the previous five years — were eliminated by Manchester United. City will fancy their chances and if they do, neither they nor their opponents will forget where the journey started.