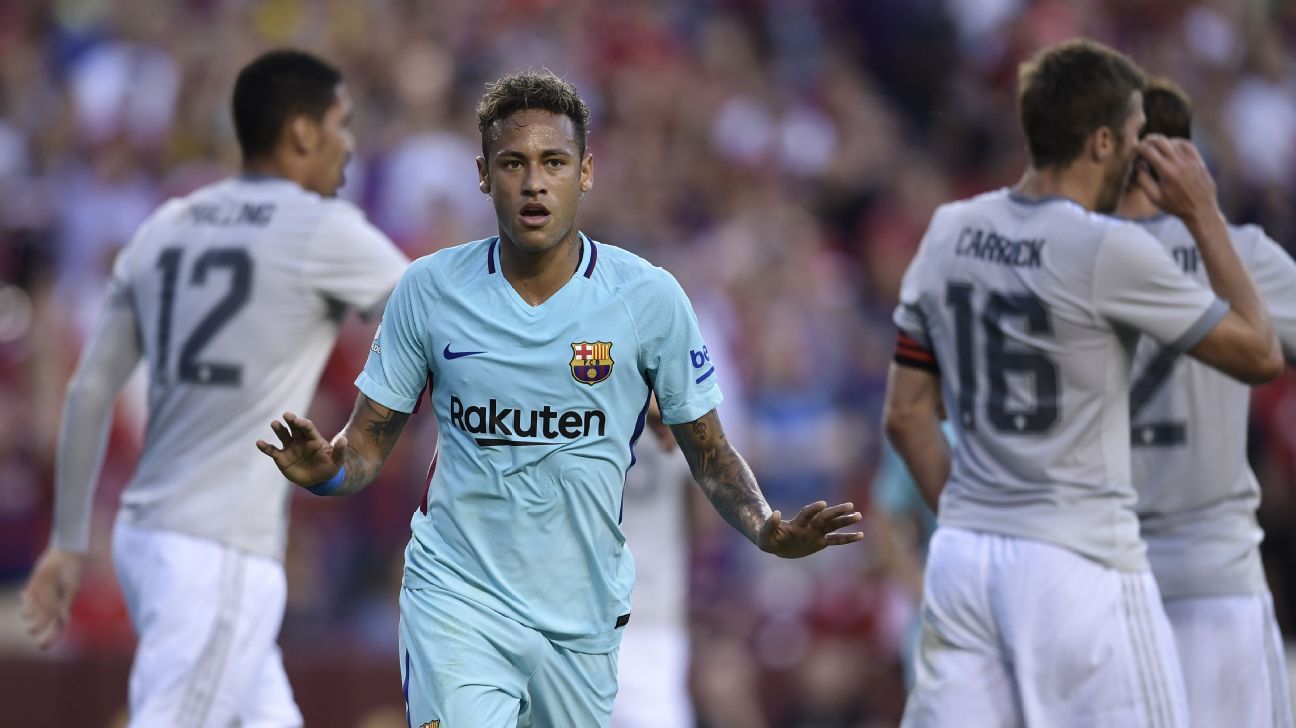 PSG: Neymar has cancelled a “meet and greet” promotion in China because he is “busy with transfer issues,” according to a company involved in the event.

– PSG will have “done their sums well” to ensure a potential world-record move for Neymar keeps them within financial fair play regulations, UEFA’s FFP head has told L’Equipe.

– Dani Alves has hit out at suggestions that he is trying to sway Neymar’s decision over his future in favour of the Ligue 1 club.

BARCELONA: Neymar has been filmed clashing with a Barcelona teammate in training amid growing speculation he is set to join Paris Saint-Germain.

— Ivan Rakitic says Barcelona’s players understand Neymar’s dilemma and will respect whatever decision the Brazilian makes as the uncertainty continues over his future.

LIVERPOOL: Liverpool remain unmoved in their stance that Philippe Coutinho is not for sale amid interest from Barcelona, sources have told ESPN FC.

– Ragnar Klavan says Peter Crouch was one of most difficult strikers he faced in his first season in the Premier League.

CHELSEA: Antonio Conte has dismissed speculation linking Eden Hazard with a move to Barcelona after reports emerged in the Spanish media that the Belgium international is being lined up as a potential replacement for Neymar.

– Conte has asked Carlo Ancelotti at Bayern Munich about the availability of Renato Sanches, according to the Bundesliga champions’ CEO Karl-Heinz Rummenigge.

– Chelsea have announced that United States defender Matt Miazga will spend a second season on loan at Vitesse.

– Alvaro Morata is set for his first Chelsea start in the preseason friendly against Inter Milan on Saturday with Antonio Conte confirming he will select his strongest available team in the final game of their Asian tour.

– Zinedine Zidane says he hopes to keep Gareth Bale, Karim Benzema and Cristiano Ronaldo at the club, while remaining coy over their chances of signing Monaco’s Kylian Mbappe.

ARSENAL: Alexis Sanchez’s start to the season could be derailed after the Arsenal forward posted a picture on social media claiming he was ill.

– Lucas Perez could be edging closer to the Arsenal exit door after his agent claimed former club Deportivo La Coruna have tabled a bid for the forward.

– Santi Cazorla still has no idea when he might play football again after undergoing eight surgeries on his heel, but has vowed to return “at my previous level” eventually.

– Hector Bellerin says the team’s recent formation switch has not “favoured” him but he welcomes the increased competition for a starting spot.

AC MILAN: General manager Marco Fassone says Diego Costa is a “great player,” but played down speculation that he will be marquee signing promised to the club’s fans this summer.

MAN UNITED: Manchester United have reportedly been given hope in their pursuit of Real Madrid forward Gareth Bale. More in Transfer Talk.

– Sergio Romero is hoping Jose Mourinho will show the same faith in him this season as he did during the last campaign.

– Rooney said playing for Everton again was “a great feeling” after making a winning return to Goodison Park.

JUVENTUS: Paulo Dybala says that he is happy at Juventus and it is up to them to decide where his future lies, amid growing speculation that Barcelona want him to replace Neymar if he moves to Paris Saint-Germain.

– Gianluigi Buffon says football is heading in a dangerous direction if Neymar’s proposed €220m transfer to Paris Saint-Germain goes through.

– LA Galaxy have sacked head coach Curt Onalfo with immediate effect, and have replaced him with former LA coach Sigi Schmid, the club confirmed on Thursday.

– In an exclusive interview with ESPN FC, Bob Bradley — Los Angeles FC’s first-ever manager — shares his motivation for taking on another expansion team.

– Jurgen Klinsmann has said his son Jonathan could have signed for every Major League Soccer team but his move to Hertha Berlin is a “great story for the family” as the goalkeeper has joined his grandfather’s favourite side.

FIFA: The Mexican football federation has been fined and warned by FIFA for the goalkeeper chant carried out by fans in home World Cup qualifiers against Honduras and the United States last month.

– Angel Maria Villar, who is being held in jail in Spain on suspicion of corruption, has resigned from his roles as FIFA senior vice president and UEFA vice president.

NEWCASTLE: Newcastle have signed midfielder Mikel Merino from Borussia Dortmund on loan for the season.

WEST HAM: Javier Hernandez has said he rejected offers from La Liga and Serie A to return to the Premier League with West Ham because of the “confidence and trust” they showed in him.

MIDDLESBROUGH: Middlesbrough have confirmed the £6.5 million signing of Ashley Fletcher from West Ham.