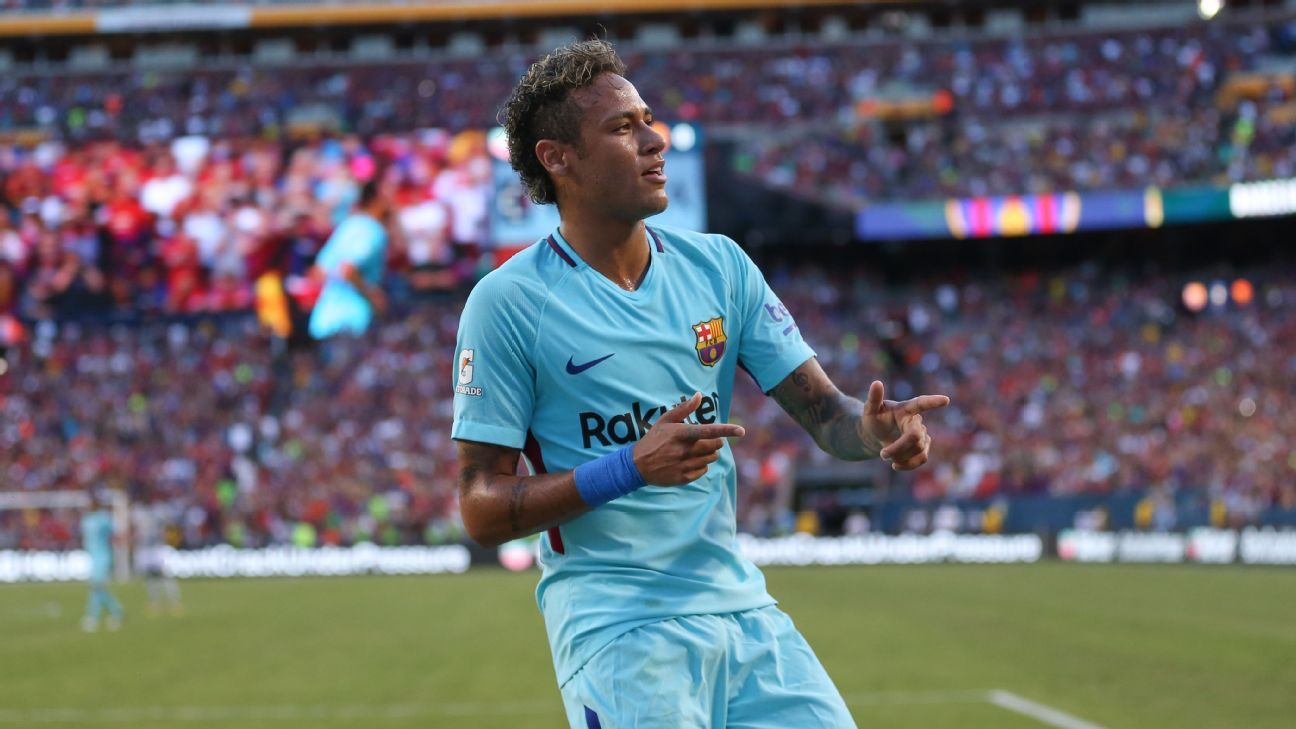 PSG: After Barcelona confirmed Neymar intends to leave the club and insisted his €222 million buyout clause be paid in full, the impending world-record transfer has sparked debate, with Jose Mourinho saying he is “not expensive” — but expressing concern about the consequences — while Jurgen Klopp said he hopes it will prove an “exception.”

– Neymar is due in Paris on Thursday after undergoing a Paris Saint-Germain medical in Portugal, a source has told ESPN FC.

– La Liga president Javier Tebas has said he is ready to file a complaint about “financial dopers” Paris Saint-Germain to UEFA and the European Union for what he feels are clear breaches of financial fair play.

– Barcelona have plenty of experience when it comes to superstars moving on, so why weren’t they more prepared for Neymar’s exit? Graham Hunter on the biggest deal of the year.

– Barcelona are reportedly ready to rival Real Madrid for Kylian Mbappe as they seek a replacement for Neymar. More in Transfer Talk.

– WATCH: The FC crew debate whether Mbappe or Philippe Coutinho is a better fit for Barca.

MAN UNITED: Nemanja Matic made his United debut as Jose Mourinho’s side warmed up for the UEFA Super Cup with a 2-1 win over Sampdoria in Dublin.

– Mourinho hailed Matic “a genius” who “thinks football” as the holding midfielder made his Manchester United debut.

– WATCH: How Mourinho can use Marcus Rashford this season.

– The MLS Board of Governors voted on Wednesday to authorize commissioner Don Garber, and a committee of owners and league executives, to “finalize the details” and later “officially close” on granting David Beckham’s investment group, Miami Beckham United, an MLS expansion franchise.

– The Seattle Sounders have completed the signing of Spanish midfielder Victor Rodriguez, the club has announced.

REAL MADRID: Real Madrid concluded their tour of the U.S. with a 4-2 penalty shootout win over Major League Soccer in the All-Star Game, but manager Zinedine Zidane was not happy with his side’s three weeks in North America.

CHAMPIONS LEAGUE: Ajax failed to make it through to the Champions League qualifiers for the third consecutive year on Wednesday when they were eliminated by Nice, while Celtic beat Rosenborg. Click here for the full round-up.

– The draw pots for Friday’s Champions League playoff round draw can be confirmed after the latest qualifying ties were completed on Wednesday, with Sevilla, Napoli and Liverpool learning their potential opponents.

PREMIER LEAGUE: The Premier League has announced that unusual pitch patterns and designs are no longer permitted.

BAYERN MUNICH: Bayern received another setback before Wednesday’s 2-0 loss to Napoli with the news that Thiago and James Rodriguez face spells on the sidelines through injury.

TOTTENHAM: Dele Alli has told British GQ that playing football saved him from a childhood on the streets.

– Tottenham Hotspur Supporters’ Trust (THST) has criticised the club’s handling of ticketing ahead of the move to Wembley Stadium, accusing Spurs of “stumbling from one bad decision to another” over the summer.

– WATCH: Steve Nicol thinks Tottenham may be in trouble.