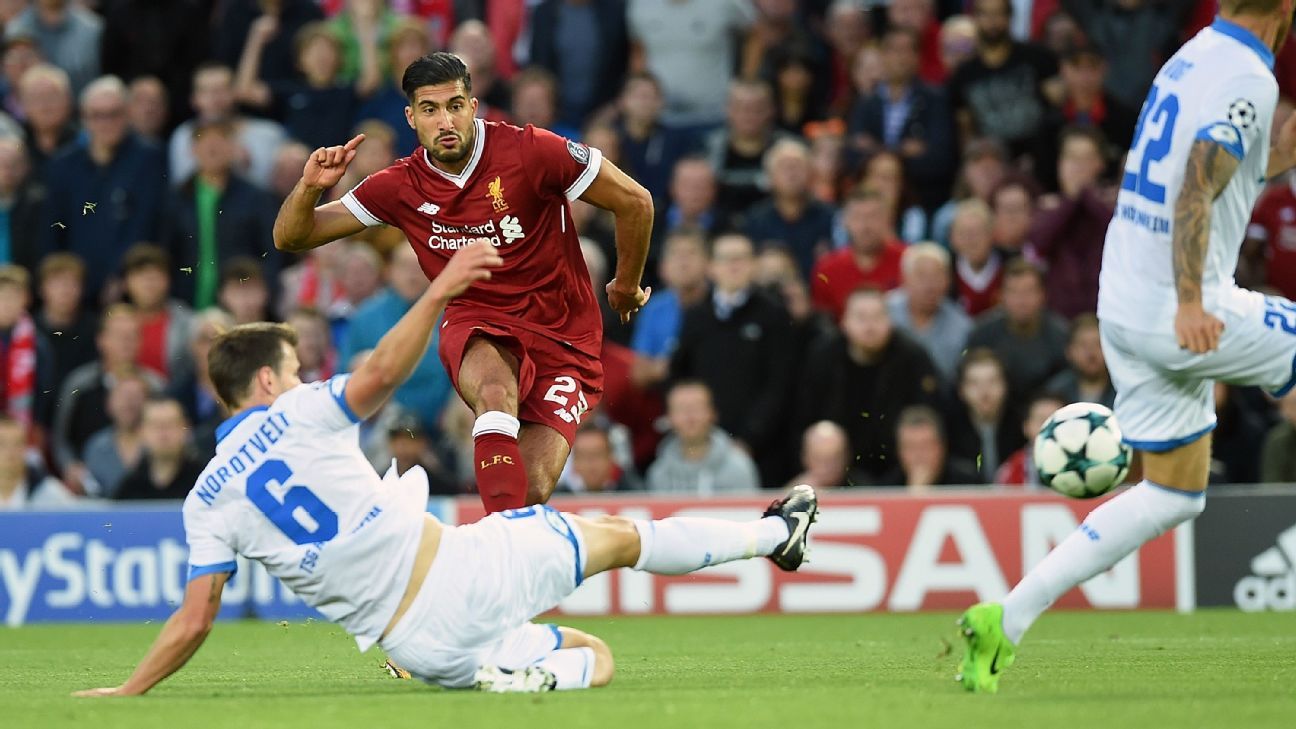 CHAMPIONS LEAGUE: Liverpool scored three times in a devastating opening 21 minutes at Anfield as they reached the Champions League group stage with a 6-3 aggregate win over Bundesliga side Hoffenheim.

– Hoffenheim manager Julian Nagelmann was highly critical of his side after the 4-2 defeat to Liverpool on Wednesday night, saying his team played “like headless chickens.”

– The 32 teams in this season’s Champions League group stage can now begin to think about their dream draw after the final seeding pots were confirmed following Wednesday’s final qualifying ties.

LIVERPOOL: Jurgen Klopp says reaching the group stages of the Champions League will help Liverpool out in the transfer market.

– Captain Jordan Henderson said Liverpool deserve to be playing Champions League football after the club booked their place in the group stage.

– Former England boss Roy Hodgson says he would not be surprised if Rooney came out of international retirement if he was required at the 2018 World Cup.

– Rooney is right to walk away from England instead of being forced out, Mark Ogden writes.

– WATCH: How will Rooney’s England career be remembered?

– Harry Maguire and Nathaniel Chalobah have been called up to the England squad for the World Cup qualifying games against Malta and Slovakia.

– Paul Pogba has told ESPN FC that Manchester United can win the Premier League this season, insisting that Jose Mourinho’s team have no reason to be “scared” of any of their rivals.

– Pogba has told ESPN FC of his hope that Russia 2018 will not be tarnished by racism towards players and supporters, and urged all fans to focus solely on a footballer’s ability rather than his ethnicity.

– Adnan Januzaj says he will dedicate his first goal for Real Sociedad to his former United coach Louis van Gaal, with whom he had a difficult working relationship.

– Marcus Rashford’s future is as a No. 9 but, for now, he must bide his time, Scott Patterson writes.

ARSENAL: Arsene Wenger has confirmed that Alexis Sanchez is fit to make his return against Liverpool on Sunday.

– Wenger has said Monaco have “closed the door” on a move for Thomas Lemar but stressed that the Gunners could still make another signing before the window closes.

– Aston Villa manager Steve Bruce has admitted his interest in Jack Wilshere, but says he doubts the Championship club can sign the Arsenal midfielder.

REAL MADRID: Cristiano Ronaldo looked a man keen on proving a point as he scored one and assisted the other as Real Madrid beat Fiorentina 2-1 in Wednesday’s Trofeo Bernabeu game.

– Sergio Ramos has been suspended for one game following his sending off in Sunday’s 3-0 La Liga win at Deportivo La Coruna, ruling him out of this weekend’s home clash with Valencia.

FRANCE: Paris Saint-Germain target Kylian Mbappe has been included in France’s squad for the World Cup qualifiers against Netherlands and Luxembourg, but Ousmane Dembele’s transfer dispute with Borussia Dortmund means he has not been picked.

DORTMUND: Borussia Dortmund have told Barcelona to meet their demands or forget about signing Ousmane Dembele.

BARCELONA: Paris Saint-Germain made a move for Jean Michael Seri in an attempt to force up the price that Barcelona would have to pay for him, his agent has claimed.

– Paulinho has set his sights on becoming a key player at Barcelona after confirming he took a pay cut to join the Catalan club this month.

– The National Union of Professional Footballers (UNFP) backed Neymar and also hit out at what it claims is a “spiteful” and “petty” complaint from Barcelona.

– Barcelona have been hamstrung by their terrible work in the transfer market, Sam Marsden writes.

TOTTENHAM: Tottenham Hotspur have announced the signing of Ajax defender Davinson Sanchez, subject to a work permit, after he completed a medical.

– Paris Saint-Germain’s Serge Aurier is close to joining Tottenham and the Premier League club are also set to beat the French side to the signing of Estudiantes’ Juan Foyth, a source close to the Ligue 1 outfit has told ESPN FC.

– Sean Dyche has criticised the time it took for stewards to tackle a Blackburn fan who confronted Burnley players in the Carabao Cup on Wednesday and said he almost came onto the pitch himself.

– Defending champions Manchester United will host Burton Albion in the third round of the Carabao Cup. Full draw here.

AC MILAN: M’Baye Niang has told AC Milan that he would like to decide where he plays this season after handing in a doctor’s note for the next 10 days.

MLS: Ola Kamara scored in the 45th minute and Justin Meram iced it just before full-time in the Columbus Crew’s 2-0 victory over the Los Angeles Galaxy on Wednesday night in a match that saw Ashley Cole sent off. Full round-up here.

– Diego Valeri broke Portland Timbers’ career goals record and set another team mark by scoring in his fifth straight game, leading his side to a 2-1 victory over Colorado Rapids on Wednesday.