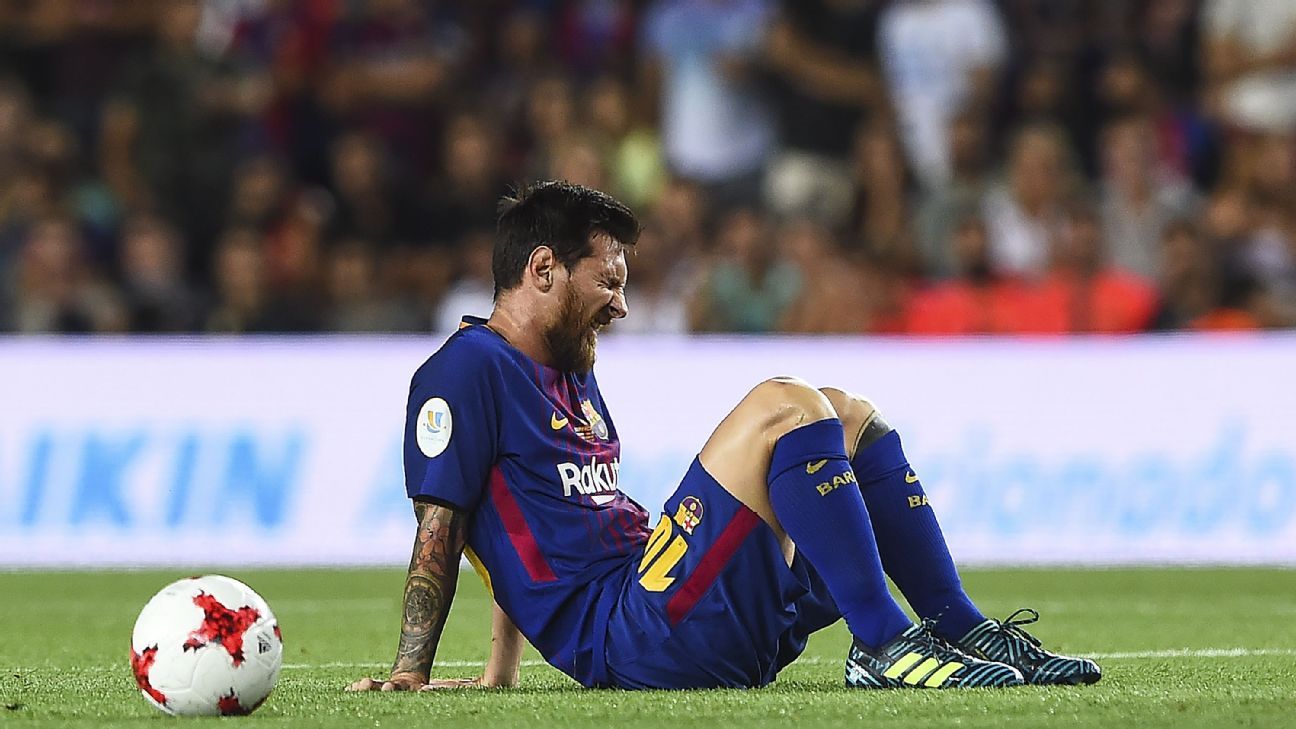 – Luis Suarez will be out of action for “at least four to five weeks” after suffering a knee injury late in Barcelona’s loss to Real Madrid in the Spanish Super Cup.

– Barcelona will wear black armbands for their match at the Camp Nou on Sunday following the attack in the city on Thursday in which a van plowed into pedestrians, causing at least 13 deaths. The Catalan club will also hold a minute’s silence before their league opener against Real Betis, as will all the teams in La Liga this weekend.

– Sporting director Robert Fernandez has acknowledged the club are in a “very difficult situation” as they look to secure deals for Philippe Coutinho and Ousmane Dembele.

– Vice-president Jordi Mestre says the board would prefer “respect not insults” after the club unveiled Paulinho as their fourth signing of the summer on Thursday.

– Victor Valdes has decided to retire from football, according to a report in El Mundo Deportivo.

CHELSEA: Diego Costa has told ESPN Brasil that he believes Chelsea are pricing him out of a move away from Stamford Bridge.

– Eden Hazard and Tiemoue Bakayoko took another step towards returning to full fitness by playing in a specially arranged friendly behind closed doors at Cobham on Thursday.

– ESPN FC senior writer Mark Ogden writes that Antonio Conte has no one but himself to blame for the team’s laundry list of issues, while the FC TV panel suggest the club are losing out in the transfer saga with Costa.

BORUSSIA DORTMUND: Manager Peter Bosz has “no idea” where Ousmane Dembele, a transfer target of Barcelona, will be at the end of the transfer window.

– U.S. international and Dortmund midfielder Christian Pulisic will take stock of his playing future following the 2018 World Cup, according to an ESPN FC source.

LIVERPOOL: Liverpool manager Jurgen Klopp has asked why any player would want to leave amid continuing speculation that playmaker Philippe Coutinho will join Barcelona.

– Klopp says he is still in the dark over the future of Barcelona target Philippe Coutinho. WATCH.

REAL MADRID: Stop me if you’ve heard this before, but Los Blancos are ready to make a move for Man United and Spain international keeper David De Gea. That and more in our latest Transfer Talk blog.

– Getafe have signed goalkeeper Ruben Yanez from Real Madrid. The 23-year-old Yanez, who joined the Real youth ranks from Girona in 2010, has signed a four-year deal with the club.

MAN UNITED: Nemanja Matic says that Manchester United are one of the three biggest clubs in the world after swapping Chelsea for Old Trafford in a £35 million move this summer.

– Eric Bailly has hailed his move to Manchester United as a “bigger step” in his career, and said despite recent struggles, the club has always been at a world class level.

ARSENAL: Gabriel Paulista is on the verge of joining Valencia in a reported €12 million deal.

– Alexis Sanchez has been called up for Chile’s upcoming World Cup qualifiers against Paraguay and Bolivia, despite a recent injury that manager Arsene Wenger said will keep him “out for a while.”

– Africa’s richest man says he is plotting a bid to take over Arsenal — and that his first move as owner would be to fire Arsene Wenger.

– Club correspondent Jonathan Smith explains why a move for Evans makes sense and assesses how the club’s new recruits like Kyle Walker and Danilo have fared thus far.

EUROPA LEAGUE: AC Milan looked impressive in their return to European competition, beating Shkendija 6-0 with help from a pair of goals from new signing Andre Silva. Meanwhile, Ajax will have to overturn a 1-0 defeat at home to Rosenborg after Samuel Adegbenro scored the only goal for the Norwegian side in the 77th minute. FULL REVIEW

EVERTON: Ronald Koeman was not happy with how his team played in the second half of a 2-0 Europa League win against Croatian side Hajduk Split.

– The match was stopped after Michael Keane’s 30th-minute goal due to crowd trouble in the away end at Goodison Park.

TOTTENHAM: Spurs have agreed a deal that could be worth over £40 million to sign Ajax centre-back Davinson Sanchez, sources have told ESPN FC.

FIFA: Cristiano Ronaldo will be hoping to be named Best FIFA Men’s Player for the second year running after being included among the nominations for the 2017 award.

BAYERN MUNICH: The club’s new sporting director Hasan Salihamidzic has banned Carlo Ancelotti from smoking in the team’s clubrooms. The move elicited a predictably humorous response from the Italian manager.

SOUTHAMPTON: Manager Mauricio Pellegrino has said the team want another central defender regardless of whether or not sought-after Virgil van Dijk remains at St. Mary’s this season. The club’s chairman remains adamant that the Netherlands international will not be sold.