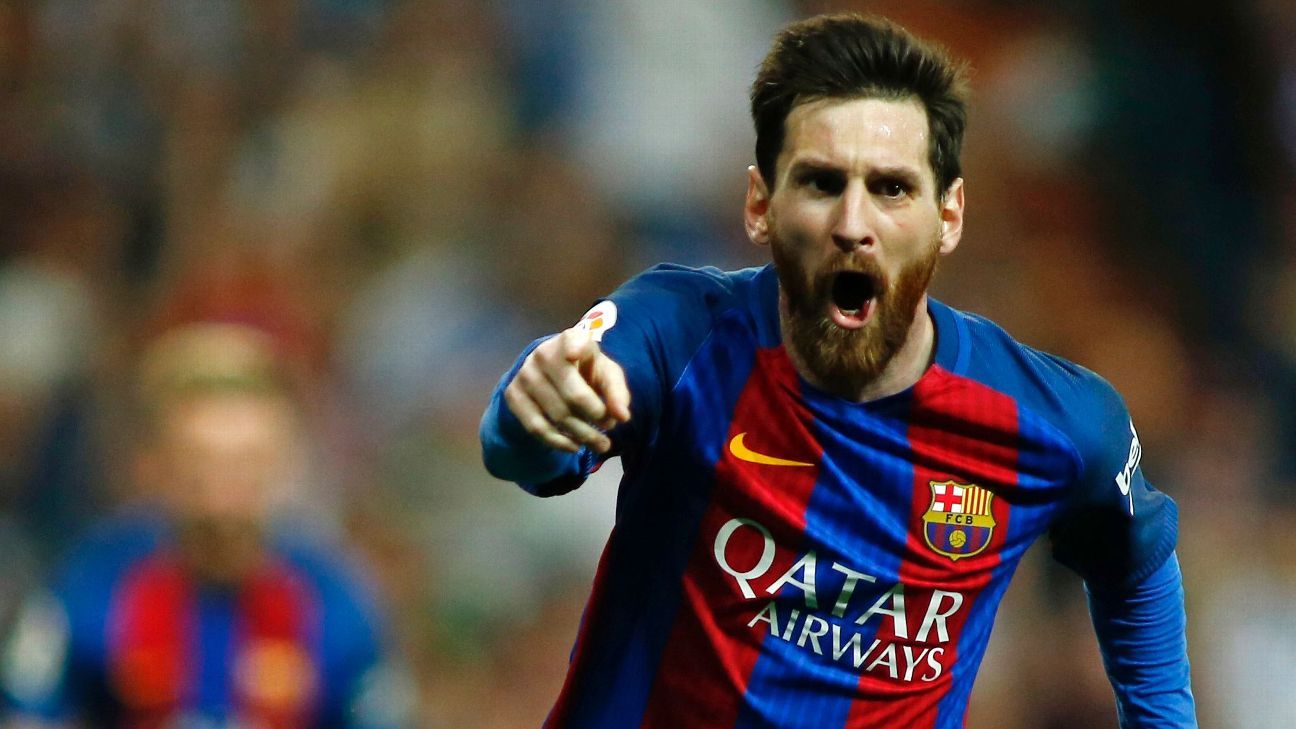 BARCELONA: As Messi prepares for his 30th birthday, Chris Jones explains why we won’t get to enjoy the iconic No. 10 much longer.

– Prosecutors in Spain say they are happy for Lionel Messi’s 21-month prison sentence for tax fraud to be replaced with a fine, a spokeswoman confirmed on Friday.

MAN UNITED: Manchester United are making progress in their pursuit of Alvaro Morata but have yet to agree a fee with Real Madrid, sources have told ESPN FC.

– Monaco midfielder Fabinho says he would be tempted by an offer from Manchester United this summer.

– Manchester United youngster Josh Harrop has turned down a new contract at Old Trafford to sign a four-year deal with Preston North End.

PSG: Paris Saint-Germain have indicated to Monaco that they are prepared to pay upwards of €135 million to sign Kylian Mbappe this summer, a source close to the club has told ESPN FC.

– Marquinhos has said he wants to remain with Paris Saint-Germain despite reported interest from Manchester United, Real Madrid, Barcelona and Juventus.

ARSENAL: Monaco’s sky-high valuation for Kylian Mbappe — reportedly between €130 and €140 million — could force Arsene Wenger to turn to other French prospects like Thomas Lemar and Alexandre Lacazette. That and more in our Transfer Talk blog.

– Arsenal have confirmed that forward Takuma Asano will spend a second season on loan at German club Stuttgart.

– Germany manager Joachim Low hailed his young side for the result against Chile, saying his team “lived up to expectations” against their more-experienced opponents.

LIVERPOOL: The long-awaited move to bring Mohamed Salah from Roma to Anfield became official on Thursday night, with sources close to Liverpool telling ESPN FC that the total deal is worth €39 million (£34.3m) and could be a club-record transfer fee, depending on the exchange rate of the British pound against the euro.

– Salah has said he believes his second spell in the Premier League will be better than the first as a result of the experience he gained playing for Roma.

– Liverpool goalkeeper Kamil Grabara could go out on loan next season, his agent has told ESPN FC.

MAN CITY: The club expect Claudio Bravo to stay and battle with summer signing Ederson for the goalkeeper’s jersey, despite the Chilean once again being left out of the national team during the Confederations Cup in Russia.

NICE: Former Italy forward and free agent Antonio Cassano has said Mario Balotelli has “found his level” at Nice, and is confident of finding himself a club ahead of the new season, adding: “I’m the best around in Italy — it doesn’t take much to understand that.”

AC MILAN: Vincenzo Montella has visited goalkeeper Gianluigi Donnarumma’s family in an attempt to convince the teenager to stay with the club and the player’s father, Alfonso, has said he believes the situation would calm down.

– The agent of Atalanta full-back Andrea Conti says a transfer to AC Milan is starting to take shape after he met with officials from the club. A bid of around €23 million is reported to have been made by Milan, who have already spent €99m this summer on Mateo Musacchi, Franck Kessie, Ricardo Rodriguez and Andre Silva.

DORTMUND: Ousmane Dembele is not for sale this summer the club have told Barcelona amid reports the Catalan giants have held talks with the player’s agent.

– Mario Gotze is close to returning to training following the “metabolic disturbances” that have kept him on the sidelines since late February, although left-back Raphael Guerreiro could be set for a long spell on the sidelines.

RB LEIPZIG: Emil Forsberg’s agent has said the winger has no desire to stay at RB Leipzig and instead “wants to make the next step in his career.” Despite the guarantee of playing Champions League football next season and a contract through to 2022, the Sweden international has been linked with a move to AC Milan and Premier League clubs Liverpool and Arsenal.

EINTRACHT FRANKFURT: Eintracht Frankfurt have said they are “irritated” that Alex Meier failed to inform them about the severity of an ankle injury sustained while working out on holiday in Florida. Meier, 34, had surgery on the ankle last week and will be unavailable for two months while he recovers.

UNITED STATES: Midfielder Kenny Saief will be eligible to play for the United States after FIFA approved his switch of national team allegiance from Israel, U.S. Soccer confirmed on Thursday.

– Darmstadt completed the signing of United States youngster McKinze Gaines from Wolfsburg on Thursday. The 19-year-old winger joins on a three-year contract at relegated Darmstadt, though Wolfsburg retain a buy-back option.

JUVENTUS: Juventus have confirmed that Dani Alves will be released from his current contract, further clearing the way for Manchester City to secure a deal for the former Barcelona defender.

– Juventus’ general manager Beppe Marotta says that Alex Sandro can leave this summer if he is no longer happy, and confirmed a suitable bid has been received.

– Sampdoria forward Patrik Schick arrived in Turin on Thursday morning to undergo a medical a head of a proposed move to Juventus this summer.

CHINESE SUPER LEAGUE: Former Chelsea midfielder Oscar has been given an eight-match ban and a fine by Chinese football authorities after he was judged to have instigated a mass brawl in Shanghai SIPG’s draw with Guangzhou R&F on Sunday.

BUNDESLIGA: China’s under-20 team could participate in one of Germany’s regional fourth divisions, the German FA (DFB) has said.