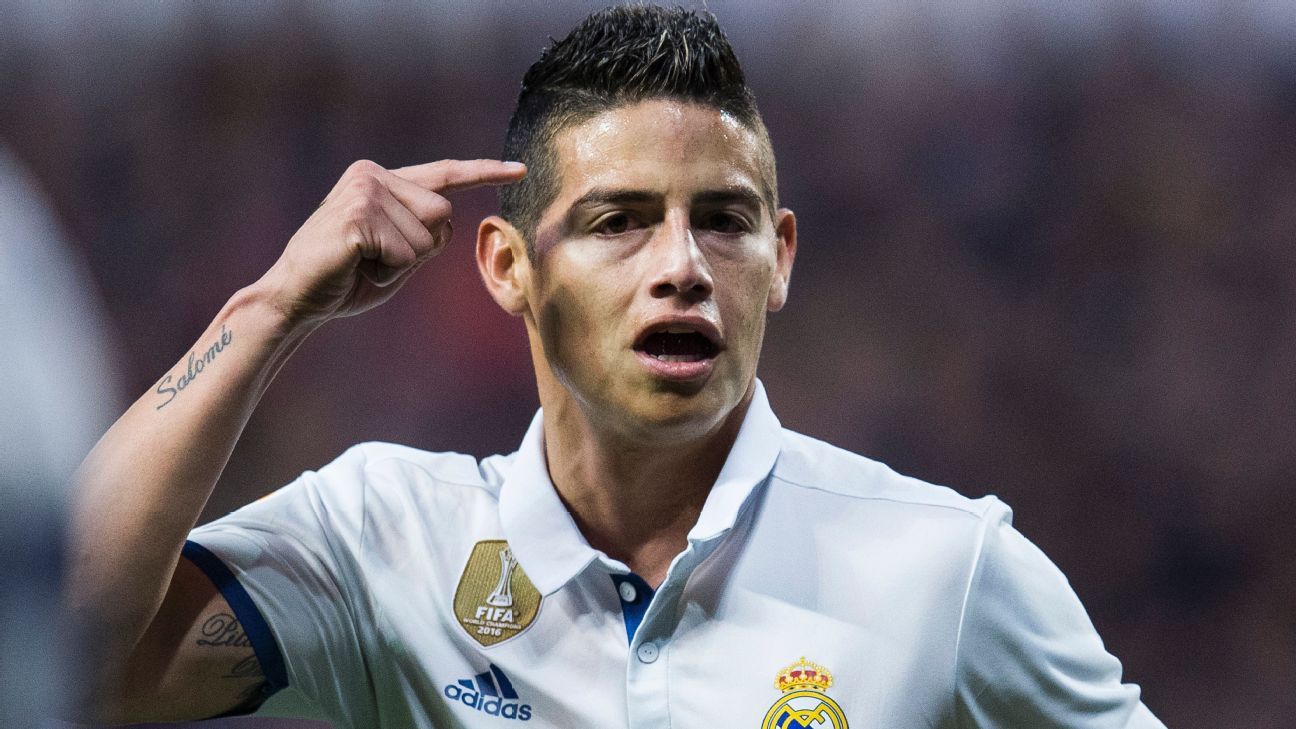 BAYERN MUNICH: Real Madrid star James Rodriguez has joined Bayern on a two-year loan deal with an option for a permanent deal subject to a medical, both clubs have announced.

– WATCH: Before the loan was announced, Raphael Honigstein gave ESPN FC TV his thoughts on the potential James deal.

– Rummenigge has confirmed that talks with Juventus are advancing over Douglas Costa’s transfer to the Italian club, although no deal has yet been struck.

– Bayern announced that they are taking a star-studded squad for the 2017 International Champions Cup (ICC) in Singapore later this month.

PSG: Dani Alves is reportedly near completion of a shock move to Paris Saint-Germain after being heavily linked to Manchester City for weeks.

– Meanwhile, PSG are seriously considering making a move to bring in defender Eliaquim Mangala from Manchester City, a source close to the club has told ESPN FC.

MAN UNITED: Romelu Lukaku has completed his move from Everton for an initial £75 million — and sources have told ESPN FC he could yet become the world’s most expensive player if United have to pay all the add-ons agreed.

– EXCLUSIVE: Paul Pogba and Romelu Lukaku have told ESPN FC that destiny brought them together at United.

EXCLUSIVE: Lukaku has revealed he asked Zlatan Ibrahimovic’s permission before requesting to wear United’s No. 9 shirt next season.

– WATCH: Mourinho still wants to add to his United squad.

– Wayne Rooney has insisted that he has not returned to Everton for a “retirement home” and said a desire to continue playing for England played a role in turning down offers to move to China.

– Aaron Lennon is happy to be back in action and has thanked people for their support after he was detained under the Mental Health Act in May.

– Wenger has said he is still interested in Monaco duo Kylian Mbappe and has “looked at” Thomas Lemar, but there is “nothing concrete” to report on possible new signings.

– Arsenal have given new striker Alexandre Lacazette the No. 9 shirt amid speculation over the futures of both Lucas Perez and Joel Campbell.

– Per Mertesacker has said he is “very happy and very privileged” after being asked to take over as the club’s academy director next year.

INTER MILAN: Inter Milan have completed the signing of Borja Valero from Fiorentina on a three-year contract.

REAL MADRID: New Real Madrid defender Theo Hernandez said he felt “no pressure” when completing a move across the Spanish capital from Atletico Madrid, adding that next season’s derbies against a Rojiblanco side including his brother Lucas will not be a “war.”

CHELSEA: Diego Costa has been excused from the start of Chelsea’s preseason training, a source has confirmed to ESPN FC.

BARCELONA: Thomas Vermaelen, Douglas and Munir El Haddadi will return to training on Wednesday, but sources have told ESPN FC that Barca are prepared to let all three leave.

– Guangzhou Evergrande will deny Paulinho the opportunity to join Barcelona until the end of the Chinese Super League season despite the former Tottenham man saying he hopes to push through a transfer this week.

– Sergi Samper has said he hopes to make his mark on the Barcelona first team next season after returning to training with the club.

– Juliano Belletti has followed Ronaldinho and Eric Abidal in agreeing a deal to return to Barcelona in an ambassadorial role, the club has announced.

ATLETICO MADRID: Atletico have overtaken Barcelona and Bayern Munich to move into second place in the UEFA rankings for club competitions.

– Atletico fans’ group Senales de Humo, longstanding critics of the club’s current hierarchy, have launched a legal challenge which could delay plans to move to the Wanda Metropolitano stadium for the 2017-18 season.

ARGENTINA: Gabriel Batistuta has said that he has “difficulty walking” because of the rigours of his football career.

LIVERPOOL: Dominic Solanke has said he joined Liverpool because the club is a “good place” for youngsters to develop their careers.

– Liverpool have submitted a planning application to turn their Melwood training facility into housing.

AS ROMA: Roma coach Eusebio Di Francesco has criticised new Liverpool winger Mohamed Salah for suggesting Radja Nainggolan will be next to leave the Giallorossi.

DORTMUND: Borussia Dortmund will be careful as they manage Mario Gotze’s return to action and will not use him in Thursday’s friendly at Essen, coach Peter Bosz has said.

SEVILLA: Marseille will have to make an improved bid if they want to sign France international Adil Rami from Sevilla, according to the Spanish club’s president Pepe Castro. Sevilla are also close to a deal for Jesus Navas.

MLS: The LA Galaxy have signed right-back Pele van Anholt, multiple sources have confirmed to ESPN FC. The news could be made official as soon as Tuesday.