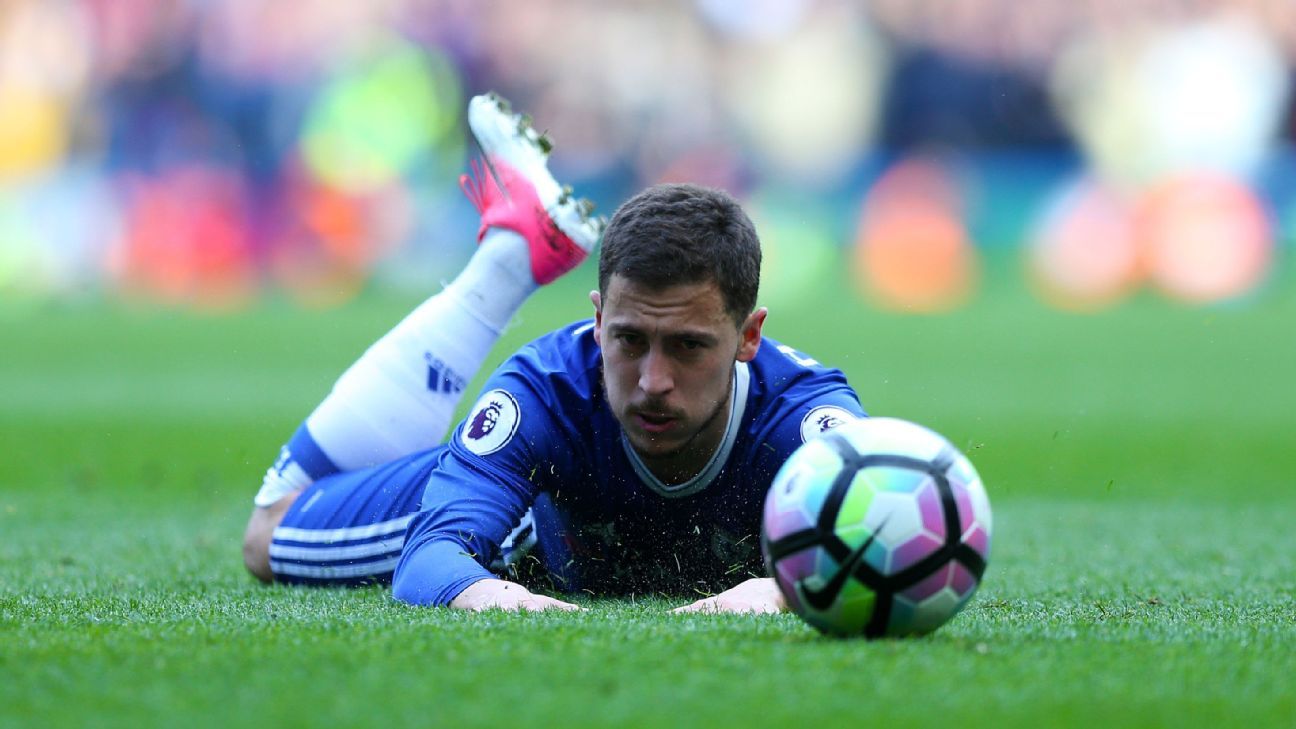 CHELSEA: Chelsea are waiting to discover if Eden Hazard will be fit for the start of next season after he fractured his right ankle.

– Hazard has not ruled out a possible summer move away from Chelsea by admitting he would consider an offer from Real Madrid.

REAL MADRID: Real Madrid celebrated their record 12th European Cup with thousands of fans on Sunday, after returning to the Spanish capital after beating Juventus 4-1 in the Champions League final in Cardiff, Wales.

– Gareth Bale wants to make more history at Real Madrid after pledging his future to the Spanish giants. Luka Modric believes Real Madrid are set to dominate European football for some time yet.

– Real Madrid president Florentino Perez says coach Zinedine Zidane will decide on the future of James Rodriguez, while adding that he does not know where Manchester United goalkeeper David De Gea will be playing next season.

– The number of people injured when panic swept through a crowd of Juventus fans watching the Champions League final in a Turin piazza has now been confirmed to be over 1,500.

– Anthony Martial’s agent has said the forward has “no reason” to leave Manchester United despite finding himself on the fringes of the first team last season.

ARSENAL: Arsenal boss Arsene Wenger has hailed Michael Carrick as “one of greatest players in English football” and says he regrets not signing him at some point in his career.

– Arsenal forward Yaya Sanogo has indicated that he will leave the club when his contract expires in the summer, saying “the adventure is coming to an end.”

– Olivier Giroud has dismissed speculation linking him with a move away from Arsenal and targeted winning the Premier League title with the club.

– Newcastle United do not plan to make a move for Arsenal defender Kieran Gibbs, sources close to the newly-promoted club have told ESPN FC.

– Former Arsenal captain Tony Adams recommended Eric Dier to his old club only to be told the midfielder was too “one-paced,” he has told The Times.

MAN CITY: Australia’s latest sensation, Aaron Mooy, says he has no idea what his club future holds. Mooy is in demand after a stellar season for English Championship outfit Huddersfield Town while on loan from Premier League giants Manchester City.

LIVERPOOL: Liverpool remain interested in signing Mohamed Salah but are yet to come to an official agreement with Roma over a transfer fee for the player, sources have told ESPN FC.

– Jurgen Klopp says he is “really optimistic” for Liverpool’s future, listing the players the club will be able to recruit in the transfer market as one reason for his confidence.

DORTMUND: Borussia Dortmund have announced the signing of defender Dan-Axel Zagadou on a free transfer from Paris Saint-Germain.

ATLETICO MADRID: Antoine Griezmann has told Telefoot that he now plans to stay at Atletico Madrid after the club were handed a transfer ban until January 2018.

BARCELONA: Jordi Alba is excited by the appointment of Ernesto Valverde as Barcelona coach, saying he believes the change from Luis Enrique will be good for him.

PSG: Paris Saint-Germain goalkeeper Alphonse Areola has revealed that the club are looking for a new shot-stopper this summer.

LA LIGA: Malaga striker Sandro Ramirez has revealed he has several offers on the table this summer but has yet to make a decision on his future.

BUNDESLIGA: Germany international Max Meyer has told Schalke he will not sign a new deal with the club.

FIFA: FIFA says it remains in “regular contact with Qatar” amid a growing diplomatic crisis between the Arab country and its neighbours.

MLS: Seattle Sounders forward Will Bruin has revealed Houston Dynamo players had tried to put him off his stride in Sunday night’s MLS game by tugging on the strapping for his dislocated elbow.