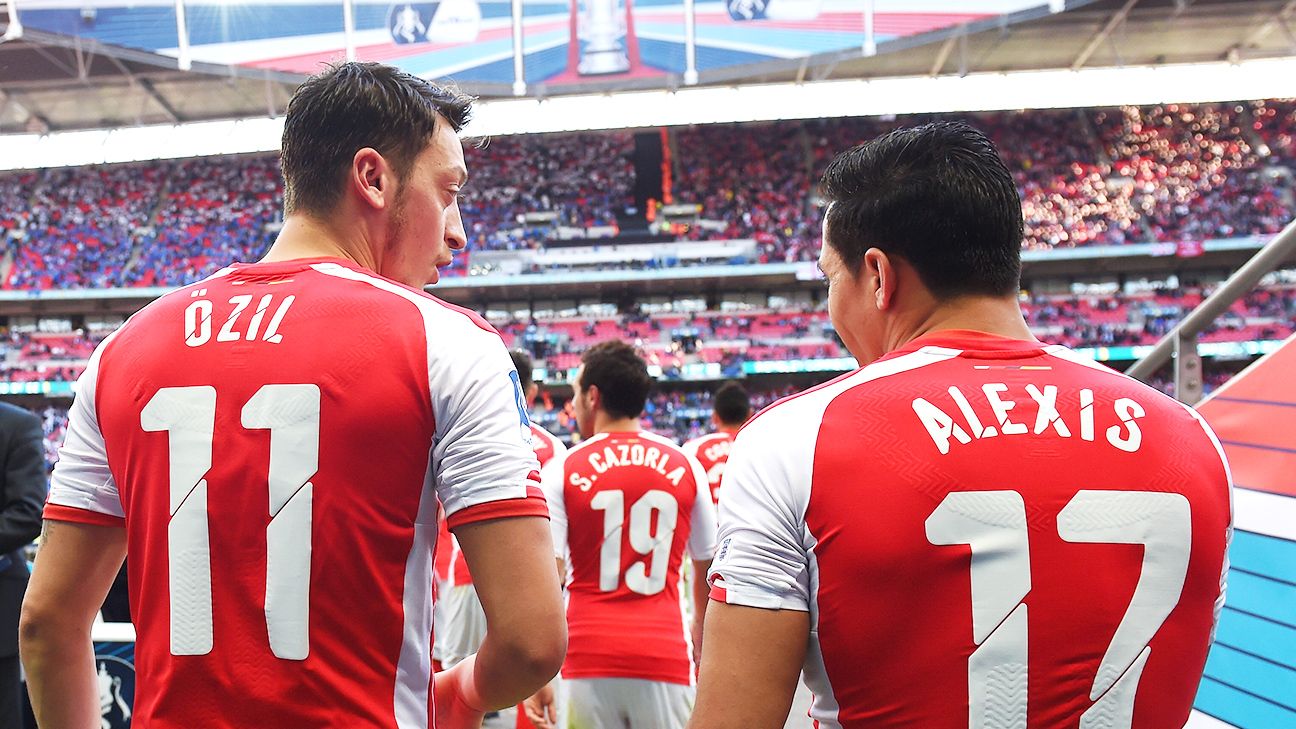 ARSENAL: Arsene Wenger says Mesut Ozil and Alexis Sanchez proved their commitment to the club in the victory at Everton but called on the duo to replicate those performances “week in, week out.”

– Sanchez and Ozil could be convinced to extend their stays at Arsenal, according to the club’s majority shareholder Stan Kroenke.

– Arsenal’s smaller shareholders showed an unprecedented level of discontent with the club’s board of directors by voting against the re-election of chairman Sir Chips Keswick and board member Josh Kroenke.

TOTTENHAM: Harry Kane has been ruled out of Tottenham’s match at Manchester United on Saturday with a minor hamstring strain sustained against Liverpool last weekend.

– The Premier League has lost some top forwards in recent seasons but it’s got two of the best natural finishers in world football in Harry Kane and Romelu Lukaku, writes Michael Cox.

– Mousa Dembele hopes he has put his injury problems behind him but is not sure if he is ready to complete 90 minutes at Manchester United on Saturday.

– WATCH: Is Pochettino wrong to dismiss the domestic cups?

– Luke Shaw says he “hopes” to play for Tottenham manager Mauricio Pochettino again one day after working under him at Southampton.

– Harry Kane is a better striker than Romelu Lukaku, according to former Manchester United full-back Paul Parker, who says the Belgium international can be made “redundant” by Jose Mourinho’s defensive tactics.

– United’s inconsistency in recent weeks is giving fans cause for concern. They will expect their team to be on the attack when Spurs visit, writes Andy Mitten.

LIVERPOOL: Philippe Coutinho is an injury doubt for Liverpool’s match with Huddersfield Town on Saturday, Jurgen Klopp has confirmed.

– Georginio Wijnaldum says he is available for selection after recovering from a knee injury that ruled him out of Sunday’s defeat at Tottenham Hotspur.

– As Liverpool and Huddersfield face off, Jurgen Klopp and David Wagner have proven that the Germany market can be a rich seam of talent, writes Richard Jolly.

REAL MADRID: Girona president Delfi Geli says his team’s home game against Real Madrid on Sunday will go ahead as scheduled despite reports that the match could be suspended due to political unrest in Catalonia.

– Cristiano Ronaldo paid tribute to a young fan who was killed in the Mexico City earthquake last month by meeting his family in Madrid.

EVERTON: Everton midfielder Idrissa Gueye has agreed a new five-year deal at the club, sources close to the player have told ESPN FC.

– Sean Dyche says there has been no contact with Everton regarding their managerial vacancy as he prepares to celebrate his five-year anniversary at Burnley.

NICE: Mario Balotelli says he dislikes personal criticism even if he is happy to rise above questions over his performance, and that he remains hopeful he will play for Italy again.

CHELSEA: Danny Drinkwater says the wait for his Chelsea debut was “killing” him after finally making his first appearance for the club.

– Antonio Conte believes Michy Batshuayi is “ready to start” more regularly for Chelsea after the striker helped his side to victory over Everton.

– WATCH: Conte was happy to see Chelsea’s youth talent proving their worth.

LEICESTER: Leicester City have appointed former Southampton boss Claude Puel as their new manager on a contract until 2020.

ARGENTINA: Argentina’s ambassador to Russia, Ricardo Lagorio, has moved to reassure fans that next year’s World Cup will be safe.

SERIE A: A passage from Anne Frank’s diary was read before Wednesday’s Italian league matches as part of a number of initiatives to condemn the acts of anti-Semitism earlier this week by Lazio fans and to keep alive memories of the Holocaust.

– Napoli returned to the top of the table while there were wins for AC Milan and Juventus. Full round-up.

– Juventus coach Massimiliano Allegri says his team need to improve if they want to beat AC Milan on Saturday, with the Rossoneri looking to launch their season when they meet at the San Siro.

AS ROMA: Rick Karsdorp faces a further six months on the sidelines after the Serie A club confirmed he had ruptured his cruciate ligaments while making his debut on Wednesday night.