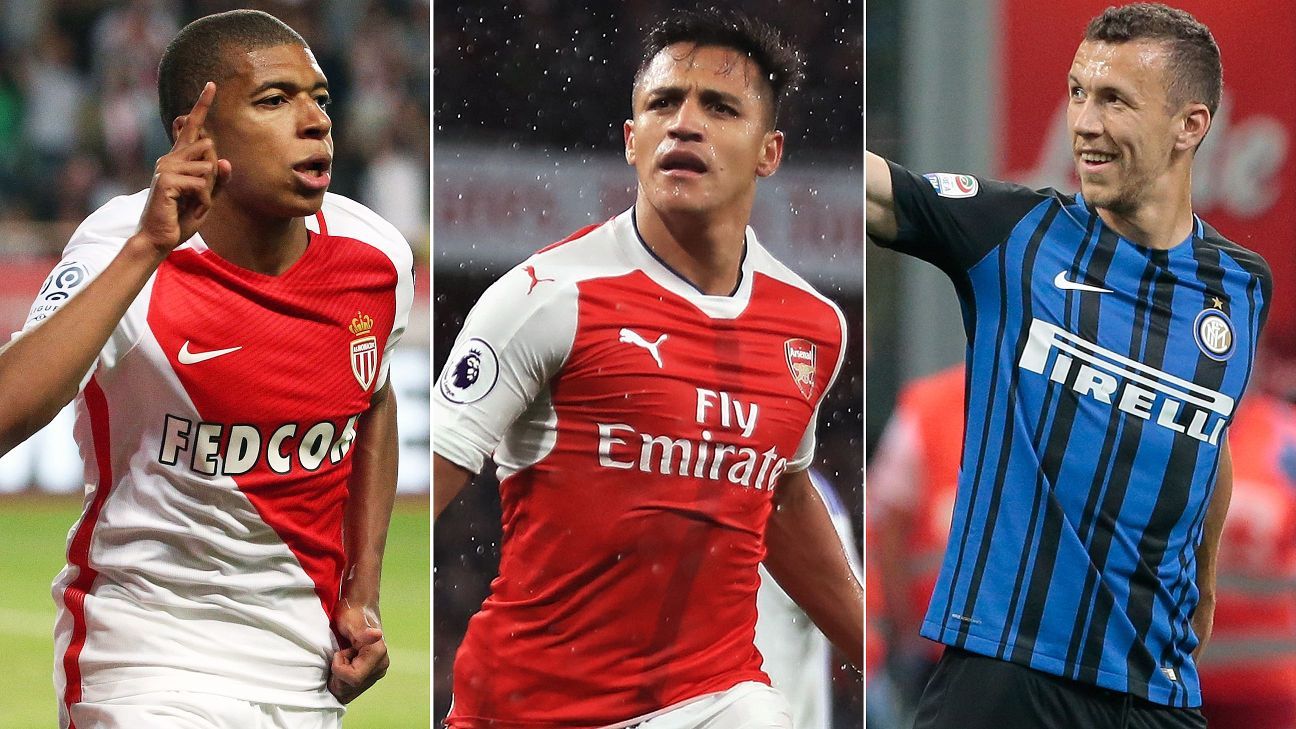 
There’s a little over a month to go in the transfer window, with clubs across Europe desperate to add to their squads ahead of the new season.

Romelu Lukaku remains the most expensive Premier League purchase at £75 million from Everton to Manchester United, while AC Milan have made everyone sit up and take notice of their lavish spending spree that includes luring Leonardo Bonucci from Juventus.

ESPN FC’s club correspondents and bloggers rate their club’s business so far and discuss what else needs to be done in the final days of the window.

Likely to join: Lemar. Arsenal are keen on the player and Lemar is keen on Arsenal. The problem is that Monaco aren’t keen on selling. But for the right price, a deal could still happen.

Remaining need: Arsenal’s needs depend on whether Alexis Sanchez is staying or going. If he leaves, Lemar or another attacking talent is needed to fill the void.

Likely to join: Nobody else currently. Liverpool may already have broken their transfer record on Salah in June, but they were willing to break the bank on RB Leipzig’s Keita. However, the Bundesliga runners-up are entrenched in their stance that the Guinean midfielder is not for sale this summer. Liverpool also like Van Dijk, but getting Southampton to sell the centre-half will be difficult after the Reds publicly apologised amid tapping-up allegations.

Remaining need: Liverpool have been crying out for a centre-back all summer. Joel Matip and Dejan Lovren are adequate starters but are not reliable enough to build the stability that is required in the position. It’s a position that needs filling. With Lucas Leiva moving to Lazio, Liverpool are also one body light in the heart of the back four.

Likely to join: Pep Guardiola still wants to bring in a new forward before the transfer window closes, but a deal for top target Sanchez looks tricky with Arsenal insisting they do not need to sell the Chilean striker who is entering the final year of his contract at the Emirates. But the Gunners could ultimately be forced to choose between keeping an unhappy player, who can leave for nothing at the end of the season, and backing down and taking around £50 million for a 28-year-old.

Remaining need: A centre-back. City have already invested around £120m in full-backs alone this summer, but the departure of Aleksandar Kolarov has left them short of centre-back cover. Captain Vincent Kompany has impressed Guardiola and the hope is that he has put his injury problems behind him, but the City boss still wants another option for what he hopes will be a competitive season.

Likely to join: Perisic. United want him and he wants to move. Inter are holding out for as much money as possible, but it feels like one that will get done eventually.

Remaining need: Jose Mourinho needs a holding midfielder, but Tottenham are in no mood to sell Dier and Chelsea will not want Matic moving to a rival.

Likely to join: Barkey will probably end up being this summer’s Moussa Sissoko when both Everton and Spurs become a little more desperate towards the end of the window, while Pereira is still a possible signing even though Spurs sources say they are not actively pursuing him. Vincent Marcel and Juan Foyth are expected to sign as young squad players.

Remaining need: Given Mauricio Pochettino’s fondness for rotating full-backs, Tottenham need a first-team ready replacement for Walker. Pochettino has long wanted a speedy, direct winger, while another centre-back is also a priority, particularly since the switch to three at the back. A striker to support Harry Kane will be considered if they can sell Vincent Janssen.

Likely to join: Paulinho. Barca are desperate to sign Verratti and have made their interest public. However, Paris Saint-Germain neither want nor have to sell. Therefore, with sporting director Robert Fernandez revealing the club will pursue a midfield signing right up until the end of the transfer window, the most likely option at the moment is Brazilian international Paulinho — a different type of midfielder to Verratti, curiously. There will be more twists and turns yet, though.

Remaining need: Having addressed their need for a right-back in Semedo and adding width in the form of Deulofeu — whom the jury remain out on — the main area for improvement is midfield. They began to lose control in the middle of the pitch last season, and despite having an array of options — almost too many — they know they need to add one top quality midfielder this summer.

Likely to join: Madrid seem unlikely to buy anyone else this summer, assuming they can resolve Cristiano Ronaldo’s latest bout of unhappiness (due to his tax problems). If Ronaldo does push through an exit, a move for Mbappe is likely to be sped up.

Likely to join: Schalke star Goretzka is hotly tipped to join, but Bayern will very likely have to wait until next year for his signature. CEO Karl-Heinz Rummenigge finally ended speculation in Arsenal’s Sanchez last weekend, stressing Bayern will not be signing another attacker after the acquisition of James from Real Madrid. Ronaldo rumours were immediately rubbished as the “hoax of the day.”

Remaining need: By relying on their ample stocks of attacking midfielders and widemen, including new signing James, Bayern are tempting fate once again, opting not to go for a backup striker for Robert Lewandowski. This could come back to bite them later on in the season, towards the business end of the Champions League.

Likely to join: De Sciglio has long been admired by Massimiliano Allegri, and his talent and versatility would be welcome. Meanwhile, Szczesny would initially would act as a backup to Gianluigi Buffon.

Remaining need: The sale of Leonardo Bonucci means Juventus should now be searching for a central defender. The midfield still needs more quality to ensure tactical versatility and strength, while the loss of Dani Alves means the club need to work on getting a right-back, especially one that can manage the duality of the role.

Likely to join: Belotti. The 23-year-old is undoubtedly a popular choice with supporters. As speculation builds again over a potential move, if the opportunity is there to sign him, Milan will take it. Aubameyang or Morata would be superb signings, but Belotti is arguably the ideal man to spearhead the attack.

Remaining need: A striker is now the main remaining objective, with CEO Marco Fassone admitting as much. A prolific goal scorer to complement Andre Silva is the last missing piece, while depth in the wing positions could be useful depending on what system Vincenzo Montella intends to deploy next season.

Likely to join: Fabinho. Although Monaco are playing hardball with PSG over the Brazilian international, Les Monegasques are more likely to sign him than teammate Mbappe. However, in order to land Fabinho, Les Parisiens are likely to need to pay an exorbitant fee. Then there’s the will-he, won’t-he saga involving Neymar, which looks set to rumble on for a while yet.

Remaining need: A long-term replacement for Thiago Motta in defensive midfield (Fabinho?), as well as greater depth in attack and central defence.