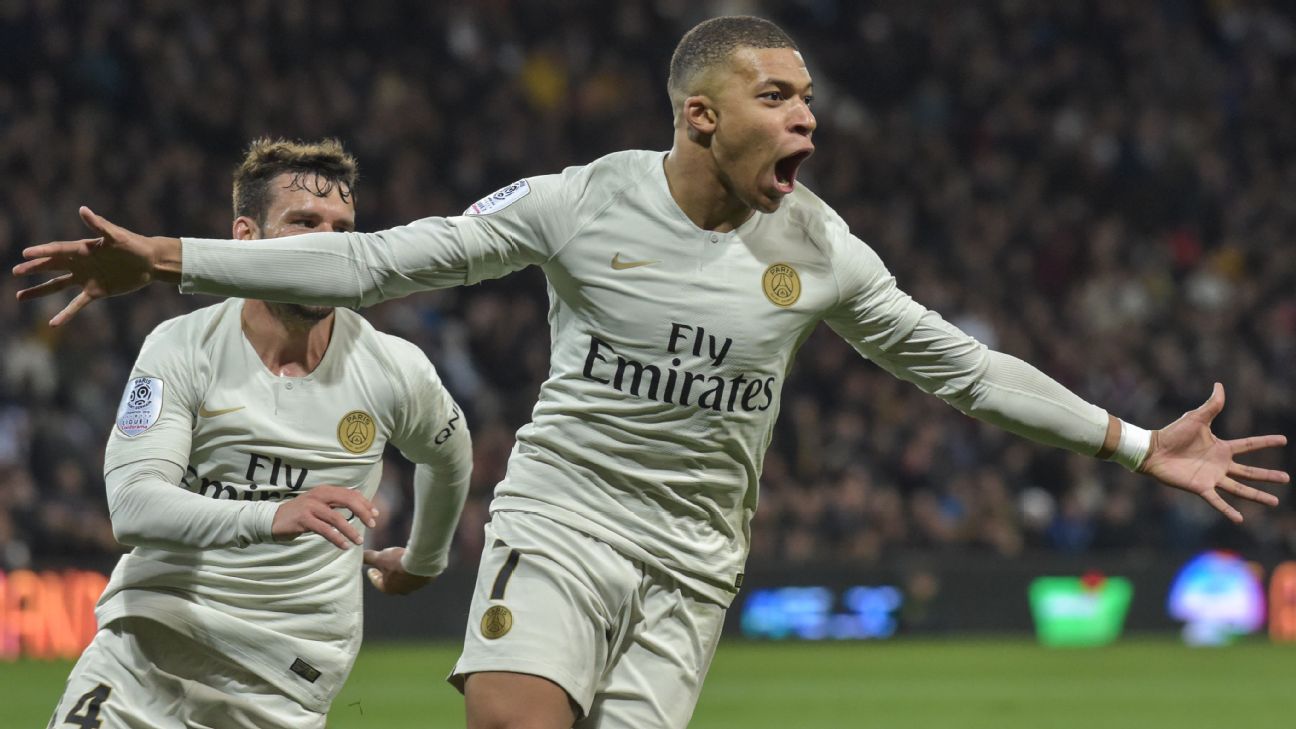 TOP STORY: Madrid to move for Mbappe in the summer

After missing out on a deal to sign Paris Saint-Germain’s Neymar, Real Madrid will turn their attentions to the Brazilian’s teammate Kylian Mbappe next summer, according to reports at Spanish publication Sport.

The news comes following talks between Real’s bitter rivals Barcelona and the Parisians regarding a move back to Camp Nou for Neymar, but it was the long-term future of Frenchman Mbappe that also became a key talking point.

During negotiations, the Ligue 1 champions warned the Catalan giants of Real’s intentions to launch talks over a deal for the 20-year-old.

Mbappe had a stunning season in front of the net last year for PSG, scoring better than a goal a game in the league, and he already has two goals in the current campaign.

22.12 BST: We’ll bring Friday’s live edition of Transfer Talk to a close with some news from Italy. Calciomercato reports that former AC Milan midfielder Andrea Bertolacci, who’s now a free agent, is keen to be reunited with Gian Piero Gasperini at Atalanta following the club’s qualification for the Champions League.

20.19 BST: Like father, like son. D’Margio Wright-Phillips, the 17-year-old winger and son of former Manchester City standout Shaun Wright-Phillips, has signed his first professional contract with the club where his father made his name, after six seasons working his way up through the academy.

18.26 BST: Before joining Fiorentina, 18-year-old forward Bobby Duncan turned down an offer to move to Manchester United so as to not “betray” former club Liverpool, according to the Mail.

16.29 BST: After leaving Manchester United on loan, Chris Smalling can envision his time at Roma lasting longer than his season-long loan. “To be able to have the chance at a big club, and then if it prolongs and the club is happy, then I can definitely see a longer term future in Italy,” the Mirror quotes Smalling as saying.

15.02 BST: According to Mundo Deportivo, Barcelona wanted to bring Juventus’ Federico Bernardeschi to the club this summer.

However, Juventus wanted €23m PLUS midfielder Ivan Rakitic and so the deal went nowhere. Tuttsport reports that Juve will try again for Rakitic in January.

14.08 BST: Gareth ‘the Golfer’ Bale is right about being a scapegoat.

13.37 BST: Manchester United defender Marcos Rojo says he will leave the club in January if he’s not given a chance to play, as his place in the Argentina team is in danger.

“I had the possibility of [joining] Everton [in the summer], but by decisions of the club or the manager it wasn’t possible,” Rojo told Ole. “Now I have to fight until December and if it doesn’t work out, I will try to leave.

“The qualifiers and the Copa America are coming and I want to be part of that. I don’t want to be out again, I want to exhaust all the possibilities and compete to be here.”

12.46 BST: It’s not particularly likely, given Paul Pogba has already revealed his wish for a “new challenge,” but Manchester United are ready to offer him a new contract, says L’Equipe.

Evidently United’s vice-chairman Ed Woodward has contacted Pogba’s agent Mino Raiola to discuss a new deal, with the France midfielder’s current terms set to expire in 2021. But it’s a wonder those two are even on speaking terms after the summer’s events.

Tedic, 19, plays for Serbian club FK Cukaricki and will move for around €3m to enter the club’s U23 setup.

11.45 BST: Philippe Coutinho could have joined Manchester City as Barcelona offered the Brazilian to Pep Guardiola this summer, says Marca.

However, Guardiola was not interested in the midfielder and he eventually went to Bayern Munich on loan.

Icardi has joined PSG on loan from Inter Milan, but Nara revealed: “He likes playing in Italy, he knows the league, he has scored 135 goals. I don’t know where, but he will go back. His priority will always be Inter…

“From the options we had, PSG were the worst because I need to go back and forth with the kids, who go to school in Italy. There were many big, Italian teams who wanted him and that would have been better, but I just thought of him.”

Semenya, who has starred in both the 800m and 1500m in athletics, will not be able to play competitively until 2020 but said: “I am grateful for this opportunity and I appreciate the love and support I already get from the team. I am looking forward to this new journey, and hopefully I can contribute as much as I can to the club.”

Van Wyk, who recently signed for Danish club Fortuna Hjorring, added: “I am extremely elated to have such an iconic athlete join my football club. I am absolutely honoured that out of all the other women’s clubs around the world, she has chosen JVW as the club where she would like to start showcasing her football skills.”

Happy to announce my signing with @jvwgirlsfootball for 2020 season. Looking forward to this journey. 🐍 pic.twitter.com/9Urd7aQ3NF

10.11 BST: Juventus midfielder Blaise Matuidi has been speaking about his rumoured summer return to PSG.

“Me, I play football. You talk, but I do not read — simply, I just play,” he said. “No, a PSG return was false. I feel good with Juventus. It is true that Paris holds a place in my heart — I was always a fan. However, today, I am with Juve. It is of great pride for me as it is a great institution. I never asked myself the question.”

09.40 BST: Brazil coach Tite hopes Neymar’s situation with Paris Saint-Germain is resolved soon as he says it does “worry him.”

Neymar has not featured for PSG since returning from the summer holidays, with the Brazilian forward wanting to leave the club during the transfer window and move back to Barcelona.

Asked about Neymar’s situation at PSG, Tite said in a news conference: “Yes, it does worry me. I hope it is resolved soon. But it’s something that is out of my hands!”

08.55 BST: Olivier Giroud is keen to play in MLS before the end of his career, the France international revealed in an interview on French television on Wednesday.

“MLS, for my family, my children who speak English, it is interesting. In a year? Two years? I don’t know when. But of course, I will be opened to a new challenge,” the Chelsea forward told RMC Sport.

Sources told ESPN FC that Giroud, 33, has watched the league and has followed the careers of European players who moved there — and has already been approached about a move there for himself a few times already.

Giroud will be out of contract next June and the former Arsenal star won’t close other doors either and will look at all the options and offers — including staying at Chelsea, where he is happy.

08.28 BST: Gerard Pique has confirmed that Lionel Messi has a clause in his Barcelona that allows him to leave at the end of each season if he so wishes.

Messi has a contract at Camp Nou until 2021 but a report in El Pais on Thursday revealed the clause which is similar to one included in Carles Puyol, Xavi Hernandez and Andres Iniesta’s deals in the final years of their time at the club. The Argentina international would just have to communicate his desire to move on before the end of May.

Pique said he is aware of the existence of the clause but insists he is not worried about Messi quitting Barcelona any time soon.

“I already knew Messi is able to leave for free at the end of each season,” the defender told Cadena Ser. “But we all know the commitment Leo has to Barca and it doesn’t worry me at all. He’s earned the right to be able to choose what he does with his future after everything he’s given the club.”

08.00 BST: Real Madrid forward Gareth Bale has said that he has been made a scapegoat after almost leaving the Spanish club this summer.

The 30-year-old Welshman was involved in a tense stand-off with Zinedine Zidane during the off-season, with the coach stating he was keen for Bale to leave, although a reported move to Chinese club Jiangsu Suning in July was scrapped.

Sources have told ESPN FC that Zidane is delighted with Bale’s change of attitude and believes the Wales international could, along with Eden Hazard, become a key player of his new Real Madrid project

“I understand I was made more of a scapegoat than most, I take it with a pinch of salt even though maybe it’s not all fully fair,” Bale told Sky Sports ahead of Wales’ European qualifier against Azerbaijan on Friday.

“I wouldn’t say I’m playing happy but… when I am playing I am professional and always giving all I can, whether that be for club or country.

“I’m sure there’ll be plenty more turbulence… I suppose it’s something you’ll have to speak to Real about and it’s between me and them… we’ll have to come to some sort of conclusion.”

The Mirror claims Manchester United pulled out of a move to sign Virgil van Dijk to set their sights on other defensive targets.

It is believed the Old Trafford club had made then-manager Jose Mourinho aware of the Dutchman’s availability while the centre-half was at Southampton, but the Portuguese instead preferred to pursue ultimately unsuccessful moves for Napoli’s Kalidou Koulibaly and Toby Alderweireld of Spurs.

United officials were also of the belief that the 28-year-old had his heart set on a move to Liverpool — which also prompted Manchester City boss Pep Guardiola to pull his side out of the running for the former Celtic man.

Van Dijk has emerged as one of the world’s top central defenders following his switch to Anfield, and was named UEFA’s Men’s Player of the Year at the end of August, beating off competition from Cristiano Ronaldo and Lionel Messi.

Serie A giants Juventus have become the latest club to register their interest in Bayer Leverkusen wonderkid Kai Havertz, according to reports at Calciomercato.

The 20-year-old made his Leverkusen debut as a 17-year-old in October 2016, but he was a revelation in the last campaign, scoring 17 Bundesliga goals to help move his side into the Champions League places.

That form has alerted Juventus chiefs, who will be keeping a close eye on the Germany international when the two sides face each other in October and December.

Interest in the attacking midfielder is rife, with Bundesliga big boys Bayern Munich and Borussia Dortmund already keeping tabs on the youngster, and there is also rumoured to be interest from the Premier League, with Arsenal having a long-standing interest in the former Alemannia Aachen trainee.

– Belgian winger Yannick Carrasco has put a string of European clubs on red alert after announcing he would be open to a move back to the continent at the turn of the year, reports Calciomercato. The 24-year-old is plying his trade with Chinese Super League side Dalian Yifang, but he is rumoured to be itching for a move.

– The Daily Record has reported claims from Gazzetta dello Sport journalist Nicolo Schira that former Juventus midfielder Claudio Marchisio has turned down a move to Glasgow Rangers. The 33-year-old is a free agent after leaving Russian side Zenit Saint Petersburg in July.

– PSG defender Thomas Meunier has dealt a blow to Arsenal and Manchester United’s hopes of signing him after claiming he is not interested in a move away from the French capital for this season at least. So says the Sun regarding the Belgian, who has less than a year remaining on his contract at the Parc des Princes and would be available on a free next summer.