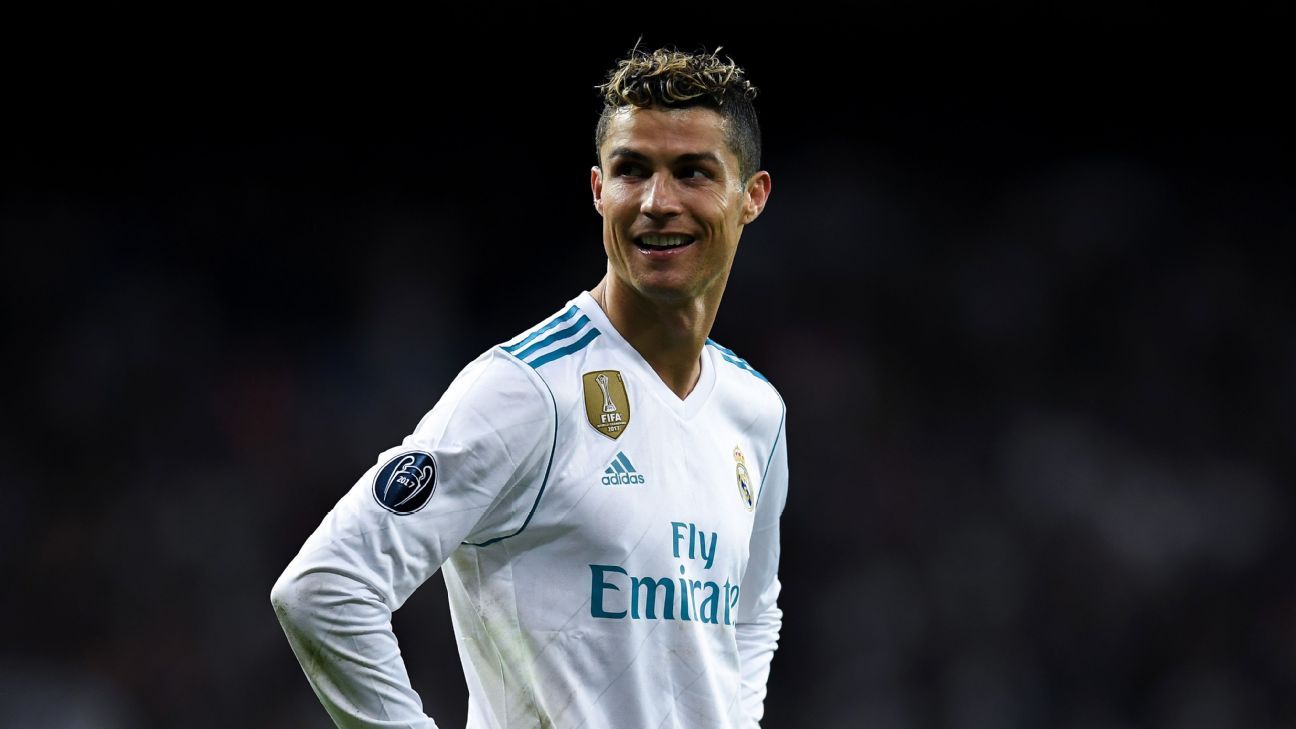 Real Madrid will accept a €100 million offer from Juventus for Cristiano Ronaldo.

Spanish TV show “El Chiringuito” report that the Portuguese forward will be allowed to leave this transfer window after nine years at the Santiago Bernabeu.

Ronaldo threw his future into doubt earlier this summer by talking about Real Madrid in the past tense after beating Liverpool in the Champions League final.

The club-record offer from Juventus is expected to make him the highest paid player in their history, with Marca earlier reporting they would offer him €30m a year.

This could then free up funds to pursue long-term target Neymar.

14.20 BST: Sources have told ESPN FC that, contrary to reports, a deal is still short of being agreed between Manchester City and Leicester for Riyad Mahrez.

13.45 BST: Sevilla’s Clement Lenglet will complete a £35 million move to Barcelona this week, The Independent write.

13.40 BST: AS are covering claims from Italian newspaper Il Messaggero that Atletico Madrid have made an offer for AC Milan striker Nikola Kalinic.

13.20 BST: The mother of Russia star Aleksandr Golovin has revealed that a transfer is being discussed for her son, the Metro report.

Chelsea have been heavily linked with a move, while there is interest from Barcelona and Juventus for the CSKA Moscow midfielder.

13.00 BST: Sources have told ESPN FC that Manchester United are open to selling Daley Blind and Matteo Darmian, but will not sell for cheap.

Sam Johnstone is expected to complete a transfer to West Brom shortly, while Matty Willock will leave on loan.

12.50 BST: Sky Sports News are joining in on the news that Chelsea and Barcelona remain in talks over the potential transfer of Willian.

12.40 BST: Former Juventus sporting director Luciano Moggi has laughed off reports that the Turin club would be able to afford Cristiano Ronaldo, according to SportItalia.

12.25 BST: Chelsea’s Thibaut Courtois says that his children are his most important consideration when it comes to a transfer.

The Belgium goalkeeper has been linked with a move to Real Madrod — and his kids live in the Spanish capital.

📝 He’s back!
#NFFC are delighted to announce that goalkeeper Costel Pantilimon has rejoined the club on a permanent basis.
#ThatLovingFeeling https://t.co/Kh7a0sVgR0

12.15 BST: The Telegraph report that Fulham are closing in on a £20 million deal for Newcastle striker Aleksandar Mitrovic.

12.10 BST: Roma are running out of time to agree a deal with Ajax for Hakim Ziyech, Corriere dello Sport say, as per Calciomercato.

They have agreed personal terms with the Morocco midfielder but will have to sell some of their current players to raise funds for the transfer.

11.55 BST: There has been an update on West Ham’s pursuit of Lazio forward Felipe Anderson.

Il Tempo write that they have agreed personal terms, but there is still some way to go between the clubs agreeing a fee. Can West Ham get it over the line?

Good to see we’ve got a new addition to the “announcement pictures with people holding shirts awkwardly so they can fit the sleeve sponsor in” collection. pic.twitter.com/6pSis9FloP

11.35 BST: Newcastle Chronicle are running quotes from the agent of Stefano Sturaro, who says that the Magpies, Southampton and Wolves are all interested in his client.

11.30 BST: Barcelona midfielder Andre Gomes has been linked to Tottenham and Wolves by Mundo Deportivo.

11.00 BST: Jose Mourinho is in the market for a number of Serie A defenders, according to Corriere dello Sport.

They report that a €65 million bid for Inter Milan defender Milan Skriniar has been rejected, while Manchetser United could also make moves for city-rivals AC Milan pair Leonardo Bonucci and Alessio Romagnoli.

10.50 BST: After completing the signing of Sokratis Papastathopoulos from Borussia Dortrmund yesterday, Arsenal have tied down Calum Chambers to a new long-term deal…

10.30 BST: In other news at Barcelona, AS report that Philippe Coutinho hopes to receive his Portuguese passport at the start of 2019, freeing up a non-EU space on the club’s squad list.

They currently have Paulinho, Yerry Mina and Coutinho, but one spot should go to make space for Arthur Melo.

As reported earlier on Transfer Talk, Paulinho has been linked to Chelsea as part of an exchange for Willian.

Liverpool, Chelsea and Napoli have been linked, while Arsenal and Milan are no longer reported to be interested.

10.15 BST: Inter Milan chief executive Alessandro Antonello has told radio station Rai Gr Parlamento, as per the Daily Mail, that Mauro Icardi will not be sold.

The Argentina forward has been linked with a move to Chelsea.

10.00 BST: Looks like Jorginho could finally be making his move to Manchester City, after he was left out of Napoli’s preseason squad.

09.50 BST: Sky Sports News have an update on who is leading the race to sign Nice forward Alassane Plea…

09.45 BST: France under-21 international Tanguy Ndombele is attracting a number of suitors after impressing with Lyon last season.

This week’s edition of France Football magazine claims that Chelsea have considered moving for him, but Tottenham hold the strongest interest in him.

09.35 BST: TuttoMercatoWeb write that, although a number of top European teams are on the hunt for Real Madrid’s Mateo Kovacic, it is in fact West Ham who are pressing hardest to sign him.

09.25 BST: Here are the covers from Marca and Sport, who lead with Cristiano Ronaldo‘s link to Juventus and Clement Lenglet heading to Barcelona respectively…

09.15 BST: Lee Grant underwent a medical at Manchester United and is set to sign a two-year deal at Old Trafford, sources have told ESPN FC.

09.10 BST: The Spanish press continue to insist that Barcelona want Willian, and Mundo Deportivo write that an offer for the Chelsea forward could include a player.

Andre Gomes, Rafinha Alcantara and Paulinho are the names touted for a potential part exchange.

09.00 BST: Mario Balotelli will decide where he will play his football next season in the coming 48 hours, according to L’Equipe. The Italy striker missed the start of Nice’s preseason training on Monday, and is still being linked to his current club’s Ligue 1 rivals, Marseille.

He was so close to being Denmark’s hero as their World Cup dreams were ended by Croatia, and now Leicester goalkeeper Kasper Schmeichel is in the sights of Roma and Chelsea, Sky Sports reports.

With Chelsea’s Thibaut Courtois and Roma’s Alisson linked with Real Madrid, Schmeichel has emerged as a potential replacement should either depart.

Alisson has also been linked with Liverpool, although reports suggest Madrid are favourites to sign him despite retaining an interest in Belgium international Courtois.

Tottenham and Arsenal could be thwarted in their attempts to sign Bordeaux star Malcom, according to the Mirror.

Malcom was strongly linked with the North London rivals in the winter, but Serie A side Inter Milan “now lead the race.”

The Mirror says Inter have tabled an offer of close to £9m for a one-year loan deal and would be willing to pay more than £26m to make that switch permanent.

But Ligue 1 Bordeaux may want more — and that could “attract fresh Premier League interest” in the Brazilian.

Huddersfield manager David Wagner is after Germany international defender Marvin Plattenhardt and Nigeria forward Ahmed Musa as he looks to augment his squad.

The Mirror reports that Musa “is in demand following his goals for Nigeria at the World Cup, with Leicester ready to cash in,” while Hertha Berlin’s Plattenhardt is a target after a deal for Erik Durm of Borussia Dortmund fell through.

Plattenhardt is also of interest to both Bournemouth and Everton, while newly-promoted Fulham could provide competition for Musa’s signature.

It says that although United opened talks about a move for the 16-year-old defender in May, Leipzig “have been busy trying to recruit some of the UK’s best young talent and are now leading the chase.”

— Stoke want Bournemouth goalkeeper Adam Federici and are in negotiations about a permanent transfer, according to Sky Sports.

Federici has a year left on his contract with the Cherries, for whom he has been third choice, but did not make an appearance for them last season.