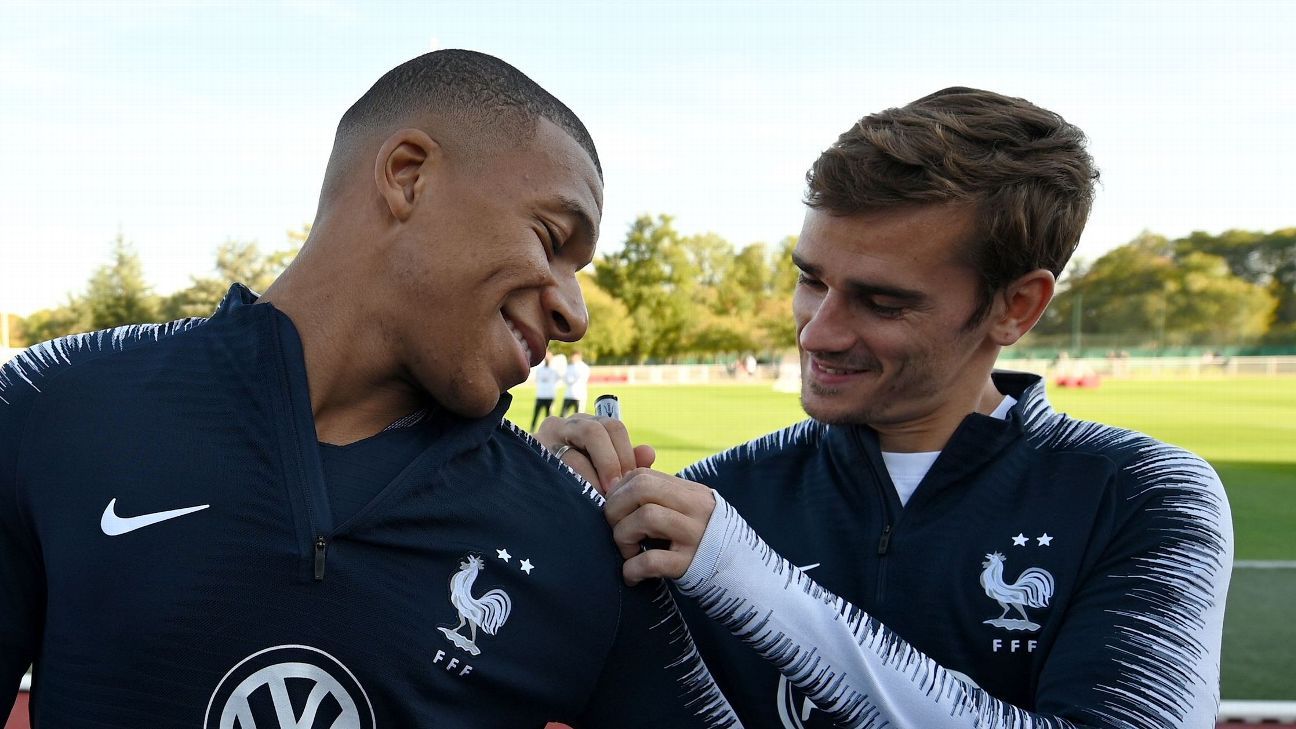 There is a chance, albeit a slim one, that Neymar will leave Paris Saint-Germain this summer. And if he does, Atletico Madrid striker Antoine Griezmann has been earmarked as his replacement according to OK Diario.

Griezmann has been linked with the likes of Manchester United, Bayern, Juventus, Real Madrid, Barcelona and Manchester City before and has only recently signed a new deal at Atletico. But with a reported €150 million (£133m) release clause in his contract, PSG are ready to stump up the cash if Neymar departs.

Having Griezmann and France teammate Kylian Mbappe in the same side would be scary prospect. Though wherever Neymar ends up wouldn’t have a bad strikeforce either…

22.58 BST: That brings to a close Wednesday’s live edition of Transfer Talk. Hope you enjoyed the Champions League action and thanks for joining us. Remember to check back in a few hours for the latest rumours and rumblings from around the globe.

The Mirror claims that Dortmund have identified Man City’s Phil Foden, Chelsea’s Callum Hudson-Odoi and Liverpool’s Bobby Duncan as English players they would like to bring to the Bundesliga. Foden and Hudson-Odoi have already gotten their feet wet in the Premier League while Duncan, a cousin of Steven Gerrard, plays for Liverpool at the underage level.

It is highly unlikely any of the three clubs will part with these players permanently, especially after the success of Sancho, but could a loan deal be on the table?

Dortmund have become one of the best clubs at snatching up and developing young talent and as Sancho and Nelson shine, England looks to be their newest target.

20.32 BST: Could Leeds take a gamble on a disgraced former Premier League star?

HITC suggests that Leeds look at ex-Arsenal and Man City man Samir Nasri in the January window. Nasri, who’s currently serving the final months of a drug ban, is no stranger to trouble and controversy but when on the pitch has proven to be a useful player.

Now 31, Nasri last played in Turkey with Antalyaspor during the 2017-18 season and previously enjoyed a loan spell at Sevilla. Nasri publicly praised Leeds boss Marcelo Bielsa in 2015 when the Argentina was managing Marseille and could find suitors few and far between due to his age and his off-field baggage.

Leeds are currently joint top of the Championship with 26 points after 14 matches.

19.45 BST: According to Football Insider, Wolves are eyeing a move for ex-Man United and current Porto defender Saidy Janko.

The 23-year-old full-back started his career at Old Trafford before permanent spells at Celtic, St Etienne and now Porto. The Swiss Under-21 international is currently on loan in the Championship with Nottingham Forest and according to the report is also being pursued by Fulham and Aston Villa.

The 18-year-old has been earning rave reviews in Serie B and has been widely compared to Italy legend and former Juve playmaker Andrea Pirlo.

Tonali has three assists so far this season for Brescia and was a leading figure for Italy’s Under-19 team that made it to the final of the 2018 UEFA European U19 Championship.

Juventus usually don’t let the best young Italian players out of Italy but with Maurizio Sarri now at Chelsea, maybe he can use his Italian connections to lure Tonali to London.

17.00 BST: Arsenal have won 10 straight and have been a pleasant surprise under Unai Emery but don’t expect the Gunners to rest on their laurels.

Calciomercato indicate that Arsenal have interest in Ajax and Argentina left-back Nicolas Tagliafico. With Nacho Monreal –who’s contract expires this summer — and Sead Kolasinac injured, Arsenal have been playing 34-year-old Stephan Lichtsteiner at left-back but could use a upgrade and younger option.

Th 26-year-old has caught the eye this year in the Champions League with the Dutch side and is known for his proficiency to get forward and join the attack. Another option for Arsenal could be Alberto Moreno who is out of favour at Liverpool and could do with a change of scenery.

15.40 BST: Did you think Paul Pogba was going to return to Juventus? Apparently the Italian club can only afford to pay around £60m for him, say Tuttosport. That might be enough to persuade Man United to let go of his hair rights, but that’s about it.

14.55 BST: Leicester have had success in bringing Japan star Shinji Okazaki to the Premier League and, according to Nikkan, are now keen to do the same with 24-year-old winger Shoya Nakajima.

The Portimonense player has been attracting attention from Borussia Dortmund, Atletico Madrid, Porto, Benfica and Sporting, but Leicester are confident of a €20m deal.

14.32 BST: According to Calciomercato, Tottenham’s radar is firmly fixed on Ajax with Donny van der Beek the latest to attract interest. And the report even claims that they are favourites to land the 21-year-old Dutchman.

13.22 BST: Former Italy manager Roberto Donadoni is being lined up as a potential replacement for Gennaro Gattuso at AC Milan, according to Corriere dello Sport.

Gattuso is under serious pressure following his questionable substitutions which ultimately led to Mauro Icardi’s last-gasp winner for Inter in last weekend’s derby.

Donadoni spent 12 seasons at Milan as a player over two spells — winning six Serie A titles and three European Cups. However, his time as a manager has proven less successful and he has been out of work since leaving Bologna in the summer.

The Frenchman’s contract is set to expire in 2020 once United trigger a one-year extension. And United are growing increasingly confident they will be able to tie down Martial with a new five-year deal, sources said.

“Fosun [the club’s owners] want to invest in class,” Sporting director Kevin Thelwell told a meeting of the Wolves Fans’ Parliament. “We are getting reports on approximately 5,000 players a month – it’s becoming a big process.”

So it looks like if you want a trial at a Premier League club, Wolves is the place to go!

11.06 BST: Liverpool scouts had a busy night as they tried to keep up with the 3-3 draw between Hoffenheim and Lyon. The scouts were reportedly there to watch midfielder Kerem Demirbay in action, according to Turkish Football.

10.21 BST: Fulham goalkeeper Marcus Bettinelli is close to agreeing a new deal to stay at the club, say Sky Sports. The 26-year-old recently got a call-up to the England squad, so everything is going right for him at the moment.

09.58 BST: Fotomac report that Manchester United outcast Marcos Rojo is being lined up for a January move to Fenerbahce. The Argentina international chose to stay at the club in the summer, but injury has seen him fail to play a game yet.

09.13 BST: Real Madrid defender Marcelo says he has not received any offers from Juventus and that he was committed to playing at the Bernabeu.

“I have said many times that there is nobody more Madridista than me,” he said. “You are looking to get something, but you will get nothing out of me.”

08.37 BST: Arsenal had reportedly arranged an £11m move for Atlanta United’s Miguel Almiron, but club president Darren Eales has poured cold water on that one. “It would have to take at least triple that for me to even get out of bed and think about any bids for Almiron,” he said.

08.00 BST: We told you it would happen. And it has happened. Marcos Alonso has signed a new contract at Chelsea that keeps him at Stamford Bridge until June 2023.

Real Madrid reportedly want Manchester United boss Jose Mourinho to return to the club, according to Spanish newspaper El Pais, though sources told ESPN FC that there has yet to be any contact.

The report states that Mourinho met with the corporate director of Real Madrid, Jose Angel Sanchez, but it also mentions that Mourinho will wait to be sacked from Manchester United rather than leave of his own accord.

While Julen Lopetegui faces the prospect of being sacked just months into a job which cost him the opportunity to manage Spain at the World Cup, El Pais say the club believe that replacing him with an authoritative figure such as Mourinho will help turn their season around. For his part, Mourinho has tamped down such speculation and sources added that the Portuguese wants to stay at Old Trafford despite a difficult start to the season.

Meanwhile, respected journalist Paco Gonzalez told El Partidazo de cope on Tuesday night that Real Madrid are actually behind the rumours. Gonzalez says the board wants to put pressure on the players — specifically Sergio Ramos, who had a bad relationship with Mourinho — as they don’t want them led by an ex-player like Guti or Santi Solari. Instead, Antonio Conte is first-choice.

The Daily Mirror reports that Conte is the favourite to replace struggling Lopetegui, but if the Italian takes over at the European champions it could end their hopes of signing Chelsea midfielder Eden Hazard.

The report states that Conte’s failure to get the best out of the Belgian star during his time at Stamford Bridge could deter Hazard from a move to Spain, or at least to Real.

The 27-year-old has shone so far under Maurizio Sarri, and he’s helped the London club remain in touch with Liverpool and Manchester City at the top of the table during the early stages of this season. Hazard has regularly said he’s happy at Chelsea and recently said he would consider spending the rest of his career there, but he’s never ruled out a move to a European super-club as he approaches his peak years.

But Chelsea set to miss out on Icardi and Piatek

It’s not all good news for Blues’ fans though as the club look for alternatives to Alvaro Morata and Olivier Giroud up front.

The Evening Standard reports that Chelsea are “are set to be frustrated in their attempts to lure strikers Mauro Icardi and Krzysztof Piatek to Stamford Bridge.”

They believe that Icardi would only consider leaving Inter for Real Madrid, while Genoa have no desire to sell Piatek while he is banging in the goals and his transfer value is rising. Maybe next year…

– Reiss Nelson has three goals in his last two league games for Hoffenheim and has joined compatriot Jadon Sancho in lighting up the Bundesliga. So much so that Hoffenheim have looked into signing him on a permanent deal. But according to a report in German newspaper Bild, Arsenal have big plans for Nelson next season, and will not allow him to leave.

– Inter Milan are still some way off agreeing a new deal with defender Milan Skriniar, as Manchester City and Manchester United continue to monitor his situation. Italian outlet Mediaset reports that talks are continuing between the centre-back and his current club, but an agreement between the two parties remains distant.