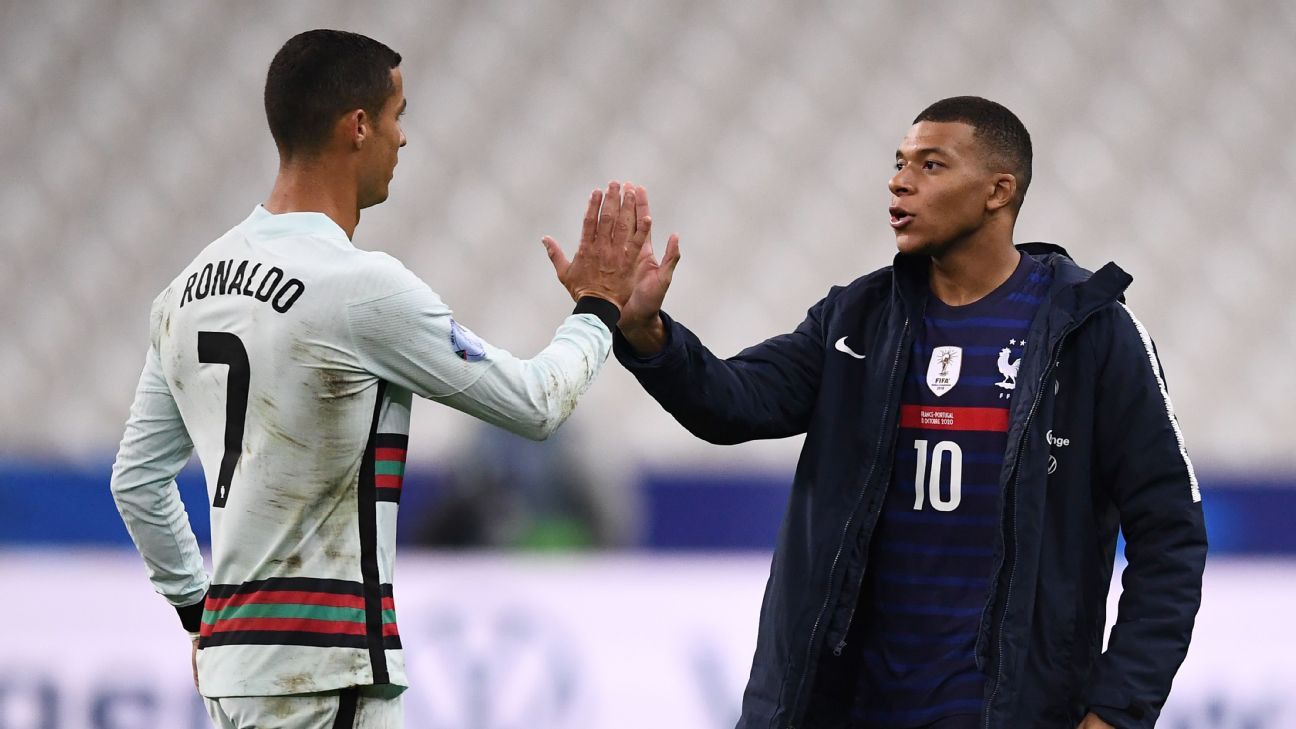 The January transfer window may seem like a distant memory, but that doesn’t mean the rumour mill has shut down! Speculation over summer moves is heating up, so check out the latest gossip below, and see all official deals here.

Paris Saint-Germain are taking measures to cover a potential Kylian Mbappe departure by sounding out a move for Cristiano Ronaldo, reports Le Parisien.

The French title believes PSG chief Nasser Al-Khelaifi has already been in touch with Ronaldo’s agent, Jorge Mendes, following Juventus‘ exit from the Champions League at the hands of FC Porto on Wednesday night.

Juventus are considering a rebuild over the summer, so it’s possible that they wouldn’t stand in Ronaldo’s way should he want to leave.

And with Mbappe’s future still unclear, PSG are sounding out possible replacements should the Frenchman decide to leave the capital at the end of the season.

Mbappe has just one year left on his contract and is yet to commit his future, and Ronaldo, 36, would be a suitable big-name replacement.

Chelsea are considering a move for Bayern Munich‘s Kingsley Coman, particularly if Christian Pulisic pushes for a summer move, reports the Daily Mail.

The Blues are believed to be long-term admirers of the French international Coman and have considered moving for him before, but the 24-year-old remains very much on their radar.

Pulisic is believed to be after more first-team football than he is getting under Thomas Tuchel, with Liverpool, Manchester United and Bayern Munich all keen on the U.S. international.

And if Pulisic does decide to leave West London, Coman would be the perfect replacement.

Coman, who has already won 23 major titles, has two years left on his contract, but Bayern might decide to let him move on so that his value doesn’t drop next summer.

Brobbey to RB Leipzig in the summer

Romano explains that personal terms have already been reached, and that Brobbey will play in the Bundesliga, and not the Eredivisie, next season.

Brobbey has been linked with several clubs this season despite having only really established himself at Ajax in the current campaign.

Indeed, he scored in Europa League action against Young Boys on Thursday night after coming off the bench, his second goal in three European matches this season. He has a prolific goal record at youth level and boasts not only great speed and goal-scoring instincts but a jump higher than Ronaldo too.

Brobbey is out of contract this summer, and despite Ajax’s best efforts to keep him, he seems determined to make a fresh start next season.

– Fulham want to make Ruben Loftus-Cheek‘s temporary move from Chelsea permanent in the summer, say the Sun. The Cottagers are confident they can pull off the audacious move if they can secure Premier League survival. Scott Parker’s men are in the bottom three on goal difference, but if they can edge out of the drop zone, there is a strong feeling the 25-year-old would want to join them, particularly with his chances under Tuchel at Chelsea limited.

– Liverpool have registered just one clean sheet in their past 10 games, which is probably why Tuttomercatoweb is suggesting the Reds have been enquiring about Porto’s 26-year-old centre-back Chancel Mbemba. The DR Congo international spent three years at Newcastle United but has come into some form in Portugal, starring in the Champions League victory over Juventus. Porto value Mbemba at around €15 million.