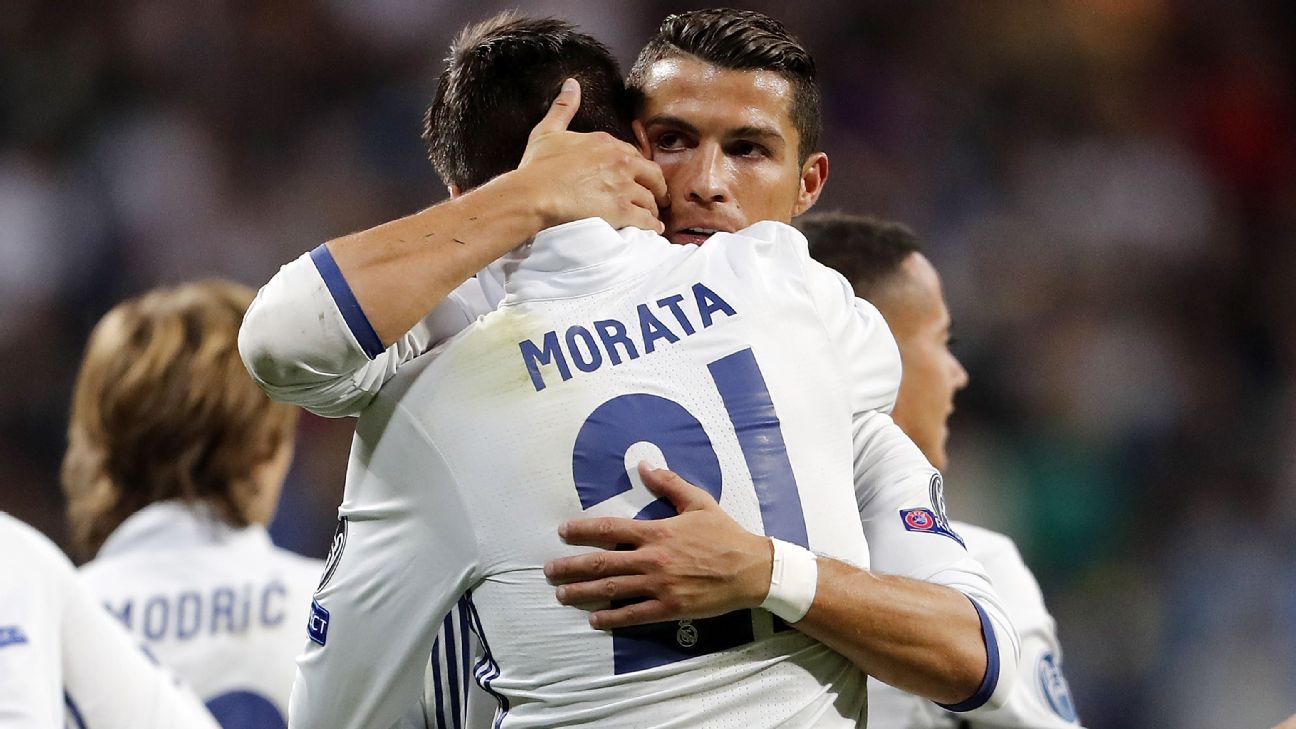 
With the market open across Europe, ESPN FC’s correspondents give an update on each side’s transfer progress.

Which players are on the radar, who could leave and what areas need addressing? Here’s a look at the action in the Premier League, La Liga, Bundesliga and Ligue 1:

Out the exit door: Diego Costa’s time at Chelsea is up — if Antonio Conte’s text message wasn’t the final nail in the coffin, Costa’s decision to make it public certainly was. Manchester United are increasingly confident they can get Nemanja Matic once Bakayoko arrives at Stamford Bridge. In general, however, the Blues will be buyers more than sellers this summer, so expect most of the departures to be youngsters heading out on loan.

What needs addressing? A replacement for Costa is the top priority and Chelsea require a new back-up goalkeeper after granting Asmir Begovic’s wish to move to Bournemouth. Beyond these needs, Conte wants to return to the Champions League as genuine contenders next season and that means more quality options in all areas. — Liam Twomey

What needs addressing? There is relatively little to address at Spurs, although a replacement for Walker will be a priority if, as expected, Manchester City cough up the cash for the right-back. Tottenham would like to find takers for last summer’s expensive flops Sissoko, Nkoudou and Janssen, and they will need to spend better on the centre-back, No. 10 and speedy winger wanted by manager Mauricio Pochettino this time around. Spurs will target youth, but don’t rule out a surprising big-name signing. — Dan Kilpatrick

Out the exit door: With Pablo Zabaleta, Gael Clichy, Caballero, Bacary Sagna, and Jesus Navas gone, expect to see moves for those discarded on loan by Pep Guardiola last season — with Wilfried Bony, Samir Nasri, Eliaquim Mangala and Joe Hart unlikely to be making their way back into the first team after spells at Stoke, Sevilla, Valencia and Torino respectively.

What needs addressing? The focus this summer needs to be defence. With Alves likely to join, Guardiola will still need full-backs on either side who are comfortable on the ball, can work up and down the flank and can cut out crosses. Another centre-back could be on the radar, with questions still lingering over captain Vincent Kompany’s long-term fitness, while a more mobile central midfielder could be necessary to inject a bit of youth into the centre. — David Mooney

The targets: RB Leipzig midfielder Naby Keita. However, getting the Bundesliga runners-up to sell a key asset may be difficult. Liverpool were huge admirers of van Dijk, so it would appear unlikely their interest has suddenly disappeared, despite the public statement.

Out the exit door: Liverpool have already rejected a bid from Napoli for Alberto Moreno, who is almost certain to leave this summer. The Spaniard will likely be followed by Mamadou Sakho, Lazar Markovic and Kevin Stewart. Less certain are the futures of Daniel Sturridge and Lucas Leiva.

What needs addressing? Liverpool had no problems scoring goals last season, more an issue with keeping them out, for the most part. While they are adequate starters, Dejan Lovren and Joel Matip couldn’t be guaranteed to play week in, week out. Recruiting a top-quality centre-half is a must this summer — and Jurgen Klopp knows it. Signing an actual left-back to compete with James Milner may be worthwhile, too. — Glenn Price

What needs addressing? Jose Mourinho needs a striker and a holding midfielder before the start of next season. He could also do with a left-back, and he wants a hard-working winger. But, most importantly, he needs to replace Zlatan Ibrahimovic’s goals. — Rob Dawson

What needs addressing? As always, Arsenal need that elusive top-class striker who can turn them into genuine title contenders. Mbappe and Lacazette would both fit the bill, and Arsenal’s transfer window could be considered a success if they land either one and keep hold of both Sanchez and Mesut Ozil. The Gunners could still use a proper holding midfielder, but that area is unlikely to be addressed. If Sanchez or Ozil leave, another attacking midfielder like Lemar or possibly Riyad Mahrez could be brought in as well. — Mattias Karen

The targets: Mbappe and Gianluigi Donnarumma have been targeted as long-term replacements in attack and in goal, with the big question whether moves are forced through this summer or the pair are left to develop a little longer at Monaco and AC Milan respectively.

Out the exit door: Zinedine Zidane did an excellent job of managing his deep squad last season, but even still it is no surprise that international stars Morata and James Rodriguez are keen to get more playing time elsewhere ahead of World Cup 2018. Despite public claims to the contrary, Florentino Perez would be happy to sell either or both should bids of around €80 million for each be forthcoming.

What needs addressing? Cristiano Ronaldo’s situation has unexpectedly come to the fore. If Perez decides the time is now right to sell the 32-year-old, a much bigger shake-up of the squad would take place. — Dermot Corrigan

Out the exit door: New coach Ernesto Valverde will be looking to get rid of a number of players. Jeremy Mathieu, Cristian Tello, Douglas, Thomas Vermaelen, Munir El Haddadi and Sergi Samper are the most likely to leave in one way or another. The club would like to make some money from sales, too, which is where the likes of Arda Turan and Rafinha could come into play.

What needs addressing? A lot will depend on how Ernesto Valverde is going to set up his team, but the most pressing needs are at right-back and in midfield. The loss of Alves left a bigger gap than those in charge perhaps expected, while the succession plan for the departed Xavi and the ageing Andres Iniesta remains under the microscope. A wide man for the right will be necessary if Lionel Messi is set to move inside, too. — Sam Marsden

The targets: Arsenal’s Sanchez is/was reportedly Bayern’s top summer transfer target, but Bayern have been put off by the player’s extravagant financial demands. At this stage, a deal looks dead. Elsewhere, Leon Goretzka of Schalke is starring for Germany at Confederations Cup and the signs point to him arriving in the future, but possibly not until next summer when his contract expires. Frenzied reports that Bayern were interested in signing Ronaldo were swiftly rubbished as “hoax of the day” by the club.

Out the exit door: Douglas Costa and Renato Sanches. Costa failed to back up his strong debut campaign after starting only 14 of Bayern’s 34 Bundesliga games last term, and the champions are prepared to let Sanches leave on loan after he managed just one full 90 minutes last term.

What needs addressing? A back-up striker for Robert Lewandowski is badly needed — someone who can also make a difference in crunch Champions League games when Bayern’s top scorer is missing, like he was for Bayern’s quarterfinal first-leg defeat to Real Madrid. However, these high-calibre players, content to languish on the bench (behind Lewandowski) for long periods, are few and far between. — Mark Lovell

The targets: Monaco pair Mbappe and Fabinho, AC Milan’s Donnarumma, Real Madrid’s Pepe and Borussia Dortmund’s Raphael Guerreiro were on new sporting director Antero Henrique’s short list when he arrived in Paris, but PSG will face a challenge to land many of those names.

Out the exit door: Blaise Matuidi, Lucas Moura, Serge Aurier, Hatem Ben Arfa, Grzegorz Krychowiak, Jean-Kevin Augustin. PSG will have to prove their ambition in order to keep the likes of Marco Verratti, Marquinhos and Adrien Rabiot, but none of those three will be actively pushed out.

What needs addressing? Plenty. PSG’s big problem last season was a weak collective mentality. How else can you explain surrendering a 4-0 first-leg lead against Barcelona in the round of 16 in the Champions League with a squad of Les Parisiens’ quality?

An injection of experience is a must, greater depth is needed in attack and the defence, and midfield could do with one or two extra bodies. With greater strength in depth, a clear hierarchy in each position, perhaps a new formation and a full preseason for the majority of the squad, PSG should be a different and more consistent beast next term.