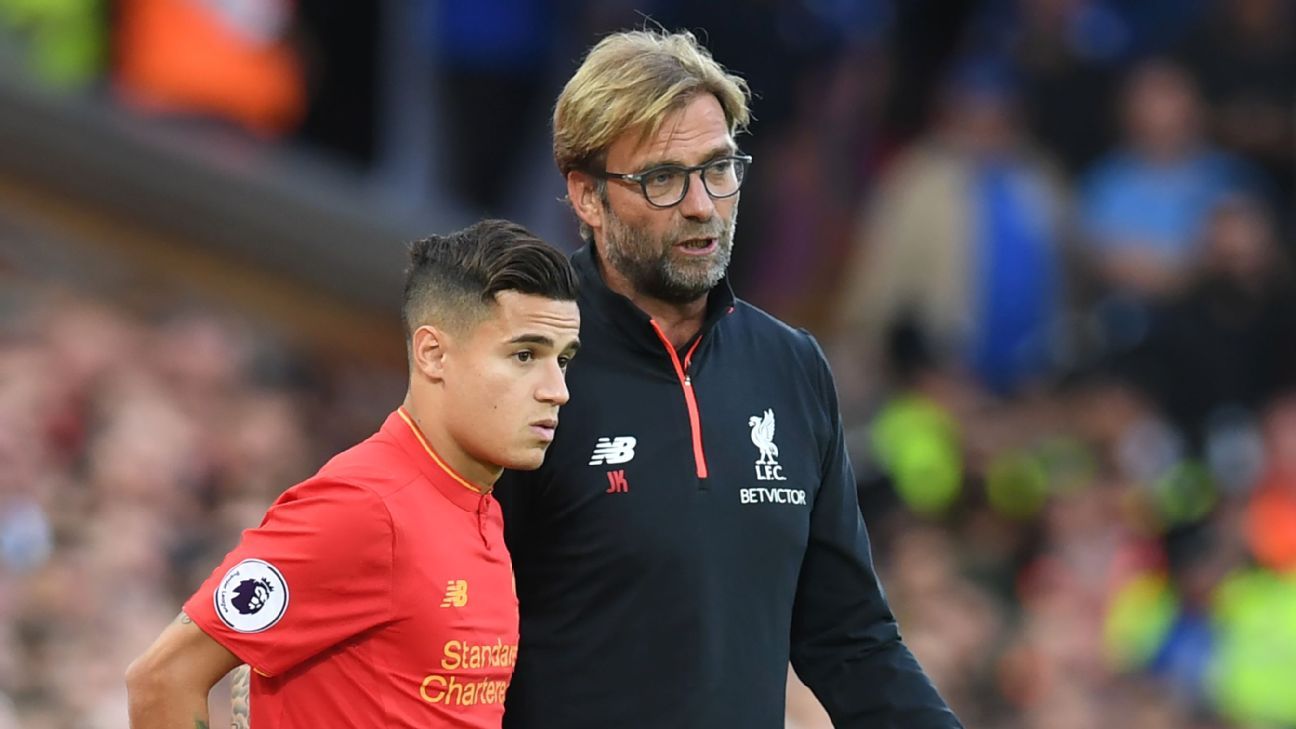 The Brazil international signed with Barcelona for a club-record €160 million in January 2018 but failed to shine in a Blaugrana shirt and has since been shipped off to Bayern Munich on loan.

The 28-year-old now reportedly wants to team up with Reds boss Jurgen Klopp again in a bid to recapture his form, and is prepared to take a pay cut to do so.

Arsenal have previously been linked with a move for Coutinho, so the ball now appears to be in Klopp’s court — would he be willing to see his former charge playing for a Premier League rival?

Arsenal are planning a double raid in the transfer window, with the Sun reporting that the Gunners are targeting Roma star Justin Kluivert and Southampton goalkeeper Fraser Forster.

Kluivert would appear to be at the top of the north Londoners’ summer wish list and, in order to get him, Arsenal are hoping to include Henrikh Mkhitaryan, who is on loan at Roma, in any deal.

Roma value Kluivert at £36 million, and former club Ajax are set to get 10% of any transfer deal made, though Arsenal are hoping to pay just £10m and throw Mkhitaryan into the bargain. Arsenal’s chances of landing Kluivert might hinge on whether they’re playing Champions League football next season.

Arsenal are also targeting Saints keeper Forster as a possible replacement for Emiliano Martinez, who might leave the Emirates in an effort to find more first-team football.

Chelsea are proving to be the big movers and shakers so far this summer, and their spending could continue if reports in A Bola, linking the Blues with Porto forward Jesus Corona, prove correct.

The Mexico international has scored four goals and registered 17 assists for the Portuguese giants this season, and his form has attracted a number of clubs, including Chelsea.

Corona is contracted to Porto until 2022, but his recent contract extension saw his release clause drop from €50m to €30m, which makes him an attractive proposition not just for Chelsea but others monitoring his situation.

Lampard has already signed Hakim Ziyech and, reportedly, Timo Werner, and is also interested in recruiting Kai Havertz. That could leave little space for Corona, though he could become a priority if the Havertz discussions fall through.

Ramsey to be sold to raise funds for Pogba bid

Juventus are planning on offloading Aaron Ramsey this summer, just one year after signing the Welshman from Arsenal, and they could use funds raised to help sign Paul Pogba, reports the Sun.

Pogba has recently returned to training with Manchester United and is expected to start alongside Bruno Fernandes when the Premier League restarts next week, but Juventus are keen to see him return to Turin at the end of the season.

Juventus are counting the cost of the coronavirus, which means they need to sell players before they can attempt to sign players for the kind of money Pogba would command.

However, Ramsey tops the possible list of departures. The attacking midfielder has had a disappointing season and is reported to be on wages of around £400k a week.

– Pedro is targeting a move to Roma once his Chelsea deal expires, reports Calciomercato. The Spaniard is yet to agree an extension with the Blues, and with his contract up in June, his situation is uncertain. Pedro is hoping to at least extend his contract until the end of the Premier League season, but beyond that it would appear he’s keen on a move to the Italian capital.

– The Mirror says Manchester United will sacrifice Andreas Pereira in an effort to raise some of the funds to capture Donny van de Beek. Pereira has figured in regularly this season, but with Scott McTominay back fit and both Fernandes and Fred in form, his opportunities could be limited. Real Madrid are also reportedly interested in van de Beek.