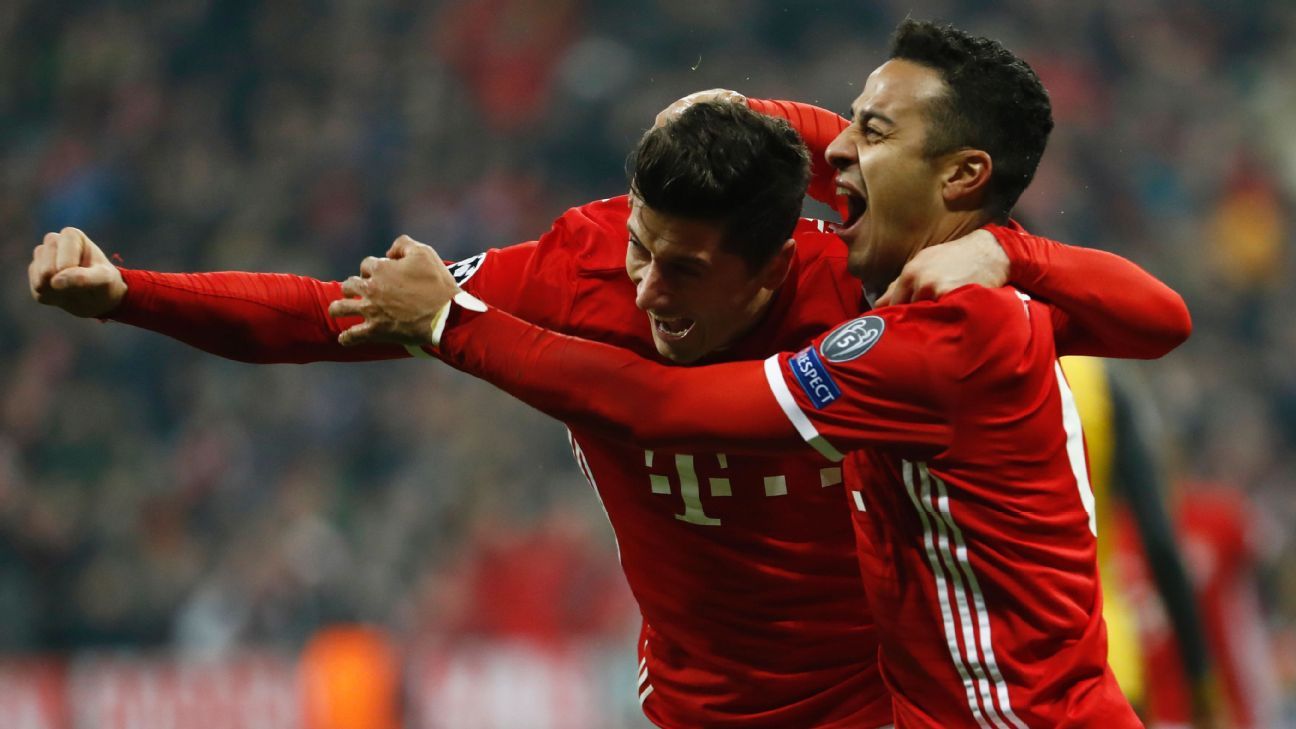 Manchester United plan to step up their transfer business with a double swoop on Bayern Munich, reports the Independent.

The Red Devils are targeting Robert Lewandowski and Thiago Alcantara as Jose Mourinho aims to rein in Manchester City at the top of the Premier League table.

It’s thought that Bayern are open to negotiations for the duo, but they could encourage a bidding war for Lewandowski as the striker continues to attract interest from Chelsea and Real Madrid.

Meanwhile, Spanish outlet AS claims Thiago would prefer a return to Barcelona, after previously rejecting a move to Old Trafford in 2013.

Toby Alderweireld also remains on Mourinho’s wish list, but Spurs have thus far refused to budge on their valuation of the defender.

Spurs close in on Grealish

It’s been a quiet transfer window at Tottenham so far, but Mauricio Pochettino could be set to seal his first signing of the summer.

According to Sky Sports, a bid for Jack Grealish is edging closer, with the Aston Villa playmaker valued between £30 and £40 million.

With Villa currently battling financial difficulties, Spurs may hope to pay significantly less for the 22-year-old, and could throw in a couple of loanees to sweeten the deal.

Pochettino sent Josh Onomah to Villa Park for the 2017-18 campaign, and may agree to a similar switch if it secures Grealish’s signature.

The 23-year-old enjoyed a successful season in Spain with Real Sociedad, earning a place in Belgium’s World Cup squad.

He scored the winner against England in the group stage to remind Premier League scouts of the quality he first demonstrated during his breakthrough at Old Trafford.

Januzaj would cost considerably more than the £8m Real Sociedad paid for his services in 2017, but has emerged as an alternative to Everton’s leading target, Malcom.

– Fulham are set to sign Newcastle striker Aleksandar Mitrovic for £20m, says the Evening Standard. The Serbia international spent the second half of last season on loan at Craven Cottage, scoring 12 goals in 20 matches.

– Burnley are plotting a bid for Swansea duo Alfie Mawson and Sam Clucas, reports the Daily Mail. The Clarets are yet to make a signing this summer and kick off their campaign against Aberdeen in the Europa League in a week’s time.

– Matteo Darmian is on the verge of securing a return to Serie A with Juventus, says Football Italia. The €20m-rated full-back has been allowed to leave Man United after sliding down the pecking order at Old Trafford.