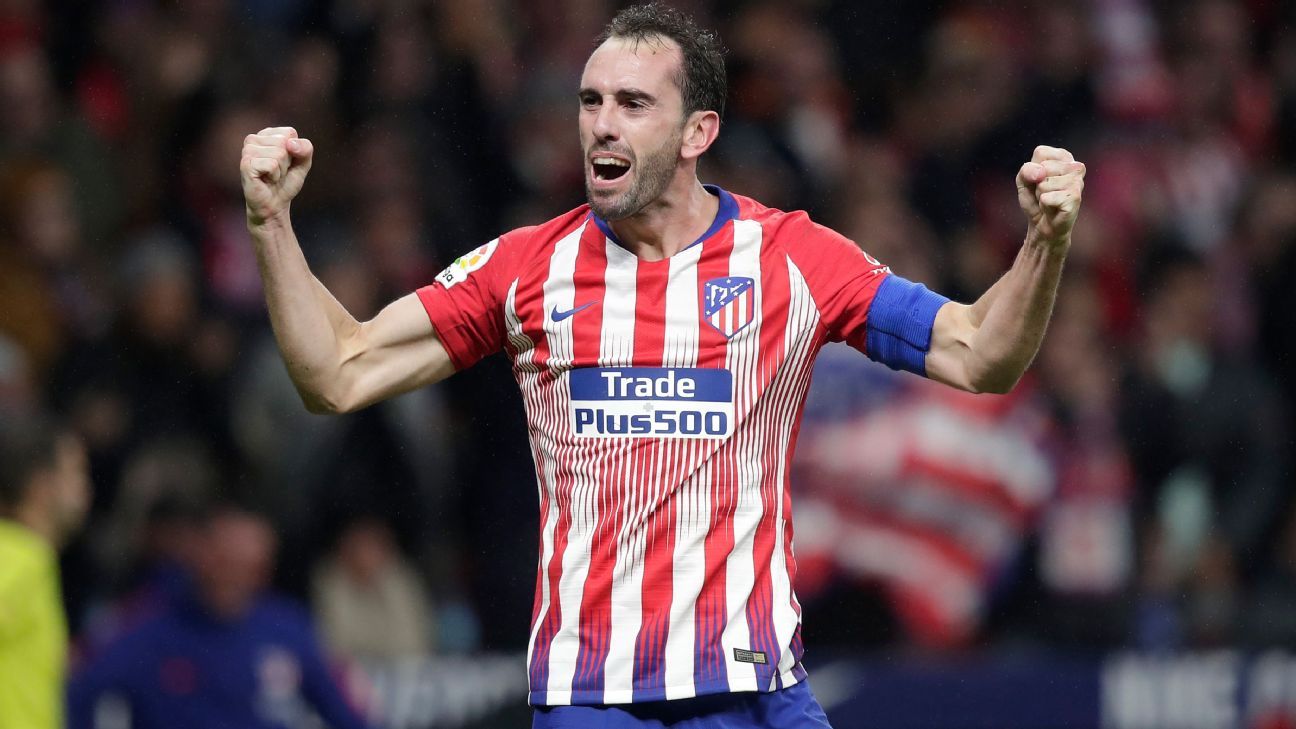 The Daily Star report that Godin is United’s No. 1 target in January, despite having failed to land him in the summer. The paper says that United chief executive Ed Woodward has “held several rounds of talks with Atletico Madrid over a deal for the Uruguay star” and that he is “confident” of landing him.

Godin would cost £20m but would certainly prove an upgrade on what United already have. One issue though: he’s 32. Experience is all very well, but he’s only got a few years left at the top, so United might be better off targeting someone a bit younger perhaps?

23.00 GMT: That will do it for today’s version of Transfer Talk LIVE. We hope you enjoyed it and remember to check back in a few hours for more reports, rumours and rumblings from around the world of football.

The 25-year-old is fed up about his lack of playing time and told De Telegraaf that he is not happy about how things have gone at Brighton since joining from PSV for £14 million.

“I want to play at the highest and not be loaned to a club in the Championship or something like that.

“I hope to find a club in Spain or Germany where I can get a fair chance to show myself.”

Locadia has scored just twice since joining Brighton and seems hell-bent on forcing his way as soon as possible.

Hernandez, 30, has only started two Premier League games for Manuel Pellegrini’s side, and has scored just twice across all competitions. The ex-Manchester United and Real Madrid striker has struggled since arriving AT West Ham from Bayer Leverkusen in 2017, and has missed extended time this season for club and country due to a virus.

The former Under-20 Colombia captain played on loan this season at LAFC, starting 26 games and producing one goal and two assists.

LAFC enjoyed a remarkable inaugural season in MLS and were 8-3-5 when Atuesta was in th starting XI.

19:13 GMT: The Daily Mail writes that Chelsea are set to make a move for U.S. phenom Christian Pulisic, with talks between Pulisic and Dortmund reported to have broken down.

The 20-year-old Pulisic played for the U.S. against England at Wembley on Thursday and is rated as one of the better under-20 players in the world.

The American’s father has said that one day his son will play in the Premier League and the player has been linked heavily with a move to both Chelsea and Liverpool for around £70 million.

18.30 GMT: A report from Football.london suggests that Arsenal and Barcelona could be set to go to battle over a highly rated prospect.

Walukiewicz broke through last season and has started 12 of 15 games for Pogon Szczecin this season.

Arsenal have started to rebuild their defence under Unai Emery and the Under-20 Poland international could be latest building block for the future alongside Rob Holding and Matteo Guendouzi.

The striker, on loan from Newcastle,  is enjoying life at the Hawthorns, having scored 9 goals in 14 games for the Baggies.

Gayle was rumoured with a permanent move away from St James’ Park in the summer but there were no clubs willing to meet Newcastle’s price of around £20 million.

After speculation this summer. the player says he has thought about a potential long-term future at West Brom.

“It’s something that will be on the cards, but I suppose I’ve just got to get this season out of the way and let others get on with what they’ve got to do.”

West Brom are currently fifth in the Championship and Gayle could be viewed as a striker who could make the jump up with the club to the Premier League if West Brom earn promotion.

16.18 GMT: Calciomercato report that Cagliari midfielder Nicolo Barella, who is on the radar of Arsenal, Tottenham and Liverpool, is now also of interest to Napoli.

Barella, 21, has been compared to Steven Gerrard so it’s easy to see why Liverpool are keen. But Napoli could be set to beat them to the punch with a £35m bid in January.

15.06 GMT: Yesterday, Toulouse defender Jean-Clair Todibo was being linked with Liverpool. Now, say Calciomercato, Juventus have made the first move to sign him.

13.29 GMT: Interesting stuff from the Evening Standard who have some good news for fans of Financial Fair Play, maybe not such good news for Manchester City.

“Pep Guardiola wants to make just one signing over the next two transfer windows” they report. And it looks like that will be a holding midfielder, with Frenkie de Jong, Ruben Neves and Tanguy Ndombele all linked. Looks like City would rather spend big on one player than spread it out across a few.

12.19 GMT: It’s all about young Brazilian stars today it seems — Atletico Mineiro’s Emerson is being tracked by Arsenal and Chelsea, claim O Tempo. The 19-year-old defender is reportedly worth around £8m and A Bola Brasil insist that Benfica and PSG are also keen.

12.03 GMT: Arsenal fans who may have seen Granit Xhaka linked with a move back to FC Basel might be getting a bit too excited. The midfielder, who isn’t a very popular figure among the Emirates crowd, says he will go back one day … but not right now.

He told Basellandschaftliche Zeitung: “My career started here and there is a goal, actually, my dream to return someday. That certainly won’t be the case at 28, I’ll be honest.”

11.17 GMT: The latest from Football Whispers says Kalidou Koulibaly is attracting interest from Manchester United, while Eric Bailly could depart to Arsenal to make way.

The 22-year-old, who can play on the left or through the middle, has impressed enough for Gremio to break into the Brazil squad following the World Cup in Russia. He made his international debut as a second-half substitute for Neymar in a 2-0 win over the United States in September.

He told Cadena Ser: “Neymar’s potential return is an issue which is not on the table right now. I have already said that no young player that leaves for money will return. We stand by that. But the circumstances with Neymar are totally different.”

09.35 GMT: River Plate president Rodolfo D’Onofrio has denied reports in the Spanish media that a deal has been reached with Real Madrid to sell midfielder Exequiel Palacios. Diario AS claimed that Madrid had already agreed terms to sign Palacios in the winter transfer window and that the deal would be completed as early as next week. “He has not been sold but there is an interest from Real Madrid in Palacios,” D’Onofrio told America TV.

09.20 GMT: Chelsea striker Michy Batshuayi has denied he wants to leave Valencia in January despite being left out of the squad last weekend. Marca have the quotes.

One of the clubs who would be interested if he were to leave would be Dortmund — where he scored tons of goals last season on loan. However, Mundo Deportivo claim the Germans are to exercise their option to buy Paco Alcacer from Barcelona on permanent basis. So that’s that.

08.45 GMT: Juventus forward Paulo Dybala says he is not distracted by rumours of interest from Manchester United. The Argentina international has been linked with a move to Old Trafford by outlets in Italy.

“I’m not thinking about the transfer market, now I’m very happy at Juventus and the objective is simply to win all the titles here,” Dybala said. “We’ve played two [Champions League] finals in four years and I think we showed in previous years we’re capable of winning, but we had some bad luck, especially last year against Real Madrid. We’ve not had the luck to win the cup yet so let’s hope we can this year.”

AC Milan are considering an “audacious” approach for Liverpool midfielder Fabinho, according to the Express.

Despite only arriving at Anfield in July, the Rossoneri reckon there’s a possibility they’ll be able to talk the Brazilian midfielder into jumping ship.

The club reportedly point to the fact that the 25-year-old has found first-team action hard to come by having endured a slow start to life at Anfield. As such, it’s being purported that Milan are willing to offer the player a January escape route.

James surplus to requirements at Bayern

James Rodriguez will soon be free to move to the Premier League after Bayern Munich decided they aren’t interested in converting the Colombian forward’s two-year loan move into a permanent one, says The Sun.

The 27-year-old is expected to return to parent club Real Madrid next summer as the Bavarian outfit stage a mass overhaul of their ageing squad.

Arsenal, Manchester United and Chelsea have all expressed an interest in the recent past, and all three clubs are reportedly still keen to make a move as and when the opportunity presents itself.

– Samir Nasri is currently training for free at West Ham in the hope of securing a short-term deal with the club from January onward, so claims The Sun.

– Juventus rejected the chance to sign goalkeeper Keylor Navas as part of the deal that took Cristiano Ronaldo to Turin, reports The Mirror.

– Barcelona general manager Pep Segura has admitted that Ousmane Dembele is struggling to settle but insists the club will stick by the France forward amid reports they are ready to move on from the 21-year-old.