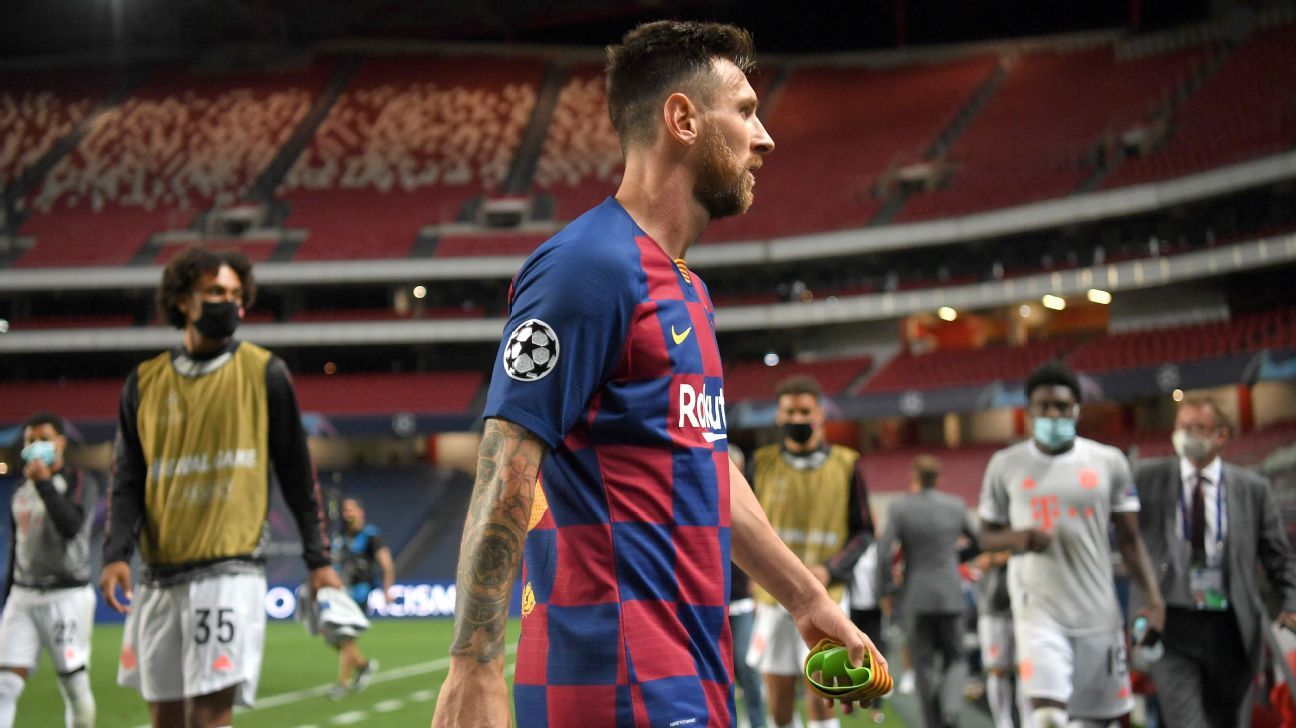 Two of the biggest Champions League losers this past week might find comfort in each other, with Manchester City prepared to offer Lionel Messi a way out of Barcelona if he wants to exit Spain.

The Argentina star is said to be exasperated with the Catalans after yet another Champions League failure — this time a 8-2 humbling at the hands of Bayern Munich — and is entertaining the idea of leaving the Blaugrana, according to the Mirror.

Man City, who suffered a similar Champions League humiliation on Saturday, believe that reunion with Pep Guardiola could be enough to tempt Messi to the Etihad and are prepared to pay the Argentina star “whatever it takes” to make the move a reality.

One obvious stumbling block will be the mammoth £635 million buyout clause that Barcelona have inserted into the 33-year-old’s contract, meaning that any move will likely need to be instigated by Messi himself, by way of a transfer request.

RB Leipzig have targeted Norway international Alexander Sorloth, who is currently on loan at Trabzonspor from Crystal Palace, according to Sky Sports.

The 24-year-old has completed only one of the two years in his agreed loan but has gained the attention of clubs across Europe, with his admirers including Napoli, Fiorentina and Wolfsburg. This comes after he scored 24 Turkish Super Lig goals this term.

Leipzig, who are preparing for a Champions League semifinal against Paris Saint-Germain, are looking for a new striker after Timo Werner completed his move to Chelsea.

It is suggested within the report that Trabzonspor could make the current loan deal permanent for £5.5m, before negotiating with the German outfit.

AFC Bournemouth have reluctantly accepted an offer of £18.5m for Aaron Ramsdale from Sheffield United, claims the Guardian.

Ramsdale, 22, was signed by the Cherries for £800,000 in 2017, and after an initial offer of around £12m was rejected, the latest one could see him travelling farther north.

It is thought that Ramsdale has his heart set on a move back to his previous home, and he might not have too long to wait until that materialises.

Fiorentina are making a move to sign Bayern Munich’s Javi Martinez, reports Sky Sports Italia. This comes just one season after they brought Franck Ribery over to Italy from the Bavarian giants.

La Viola have officially asked Bayern about the Spaniard’s availability after he has made only 10 starts across all competitions so far this term.

The decision is said to be Martinez’s to make, as he might want to stick around for the exciting project Bayern are building under Hans-Dieter Flick.

However, this would result in him accepting another season of limited time on the pitch, something he could be unwilling to do at 31 years old.

AC Milan are looking into a swap deal with Lokomotiv Moscow, which would see Aleksei Miranchuk and Diego Laxalt switch sides, reports Calciomercato.

The Milanese outfit do not want to invest heavily in the Russian; Lokomotiv have already offered €7m for Laxalt, while the Italians want at least €10m.

It is claimed that neither club is in a rush to complete the deal, though it could be beneficial for both parties.

However, there might be some urgency forced upon Milan, with Atalanta also growing increasingly interested in a move for Miranchuk, even if he has previously expressed an appreciation for the Rossoneri.

– Marcelo Bielsa is hoping to bring FC Basel striker Arthur Cabral to Leeds United, according to Globo Esporte. It is suggested within the report that the Lilywhites will pay €18m in total, with €3m of that being add-ons. Some of that fee will go to Brazilian clubs Palmeiras and Ceara, who own part of his financial rights.

– Wellington Phoenix full-back Liberato Cacace is on the radar of an unnamed Championship side, according to Paul Ifill. The former Nix, Millwall and Crystal Palace star told New Zealand outlet Stuff: “I had been speaking about who could potentially play overseas and I’d actually mentioned Callum McCowatt and Libby.

“A scout at a Championship club, I won’t say where, and he rang me and said I saw your podcast, we’ve been doing our homework and our gaffer here likes the look of him.”