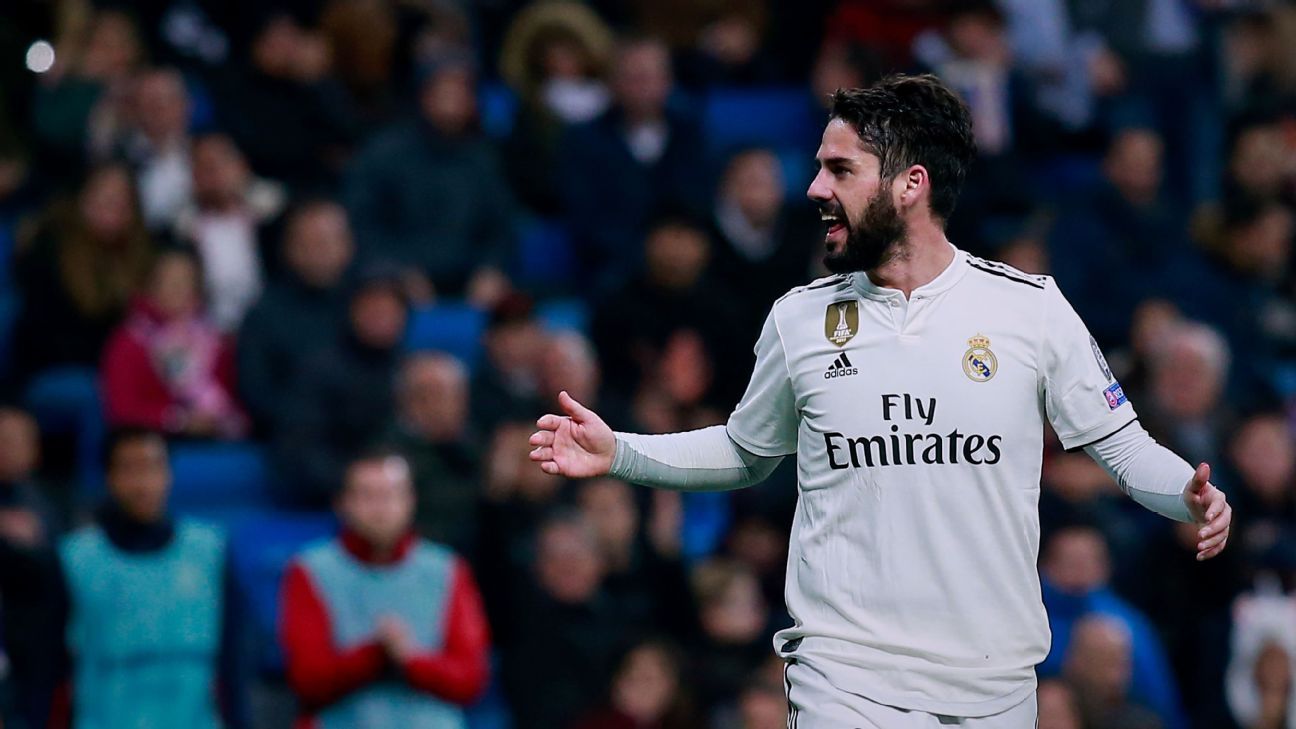 Manchester City are ready to test Real Madrid’s resolve with a lucrative offer for Isco, according to AS.

The Malaga-born midfielder has been out-of-favour since Santiago Solari took charge of Los Blancos and has even been subjected to boos from the Bernabeu faithful for the first time.

City boss Pep Guardiola is an admirer of Isco and it is believed that the ex-Barcelona manager would be a significant draw for the player, who has a contract until 2022 and a mouth-watering minimum release clause of £630 million.

However, given the Spain international’s unique situation, Madrid president Florentino Perez may be willing to negotiate. However, it is likely that the Etihad club would need to better the £105 million that Juventus paid for Cristiano Ronaldo last summer.

Highly sought-after Lyon star Tanguy NDombele is unlikely to move in January and instead would rather stay in France to help the Les Gones in their Champions League adventure, according to Sky Sports.

There is an endless queue of suitors after the 21-year-old’s signature — led by Manchester City, Manchester United and Tottenham — but the Frenchman supposedly wishes to bide his time and see out the season with Lyon.

If he continues his fine form, Ndombele is likely to have the pick of the bunch next summer.

Barcelona’s need for a new central defender has become even more urgent now that Thomas Vermaelen has suffered another injury setback, according to Mundo Deportivo.

The La Liga leaders are already short at the back as Samuel Umtiti’s knee problems continue and Los Cules are now rumoured to be ready to act decisively in January.

Ernesto Valverde’s side have been linked with a move for Chelsea’s Andreas Christensen, but reports suggest they could also be tempted by Real Sociedad’s Diego Llorente, who has been part of the Spanish national team set up under former Barca coach Luis Enrique.

Manchester United boss Jose Mourinho has made no secret of his desire to sign a centre-back in January (and long before) and is believed to be interested in Napoli’s Kalidou Koulibaly, according to The Sun.

The Red Devils supposedly sent scouts to watch the highly-rated Senegalese defender during Napoli’s Champions League defeat to Liverpool at Anfield last week, where he impressed.

United are rumoured to be willing to pay around £90m for the 27-year-old in January, as they attempt to cure their defensive woes, which has seen Mourinho’s men already concede more goals this season than the entire previous campaign.

The point of no return for Rabiot

Paris Saint-Germain midfielder Adrien Rabiot seemingly has one foot out the Parc des Princes door and will not sign a new contract.

Club chief Antero Henrique confirmed in a remarkable interview that the Frenchman will not feature in any matchday squads until he commits his future to the Ligue 1 champions, a decision which is supported by manager Thomas Tuchel.

It is believed that PSG may be ready to cash in and sell the 23-year-old in the January window with long-term admirers Barcelona and Liverpool both on standby.

Spurs are reportedly ready to rival Roma for the signature of Dutch star Tonny Vilhena. The Feyenoord ace bagged 11 goals and four assists in the Eredivisie last season, but may not command a huge fee, given that his contract runs out at the end of the 2019/20 season.

In a bid to sort out their leaky defence, Fulham are eyeing up a move for Chelsea veteran Gary Cahill, according to reports. New boss Claudio Ranieri hopes that the former England international will add the much-needed experience to shore up the Cottagers’ rearguard. The 32-year-old’s contract runs out at the end of this season and would therefore be available on a free transfer.

Ranieri is also rumoured to be interested in signing Victor Moses from neighbours Chelsea. The Nigeria international has gone from being an ever-present to a never-present and would be available for around £12m, a fee which Fulham deem good value.

Despite not enjoying the regularity that he would have liked under Chelsea coach Maurizio Sarri, Ruben Loftus-Cheek has impressed when given an opportunity at Stamford Bridge and is reportedly attracting interest from West Ham. Hammers boss Manuel Pellegrini is supposedly eager to secure the England international on an initial loan deal and can offer him the playing time he so desperately craves.

Cesc Fabregas continues to be heavily linked with a move to AC Milan after not featuring in Chelsea’s 2-1 win over Brighton at the weekend. The Rossoneri are believed to be looking to strengthen in January and could take advantage of the Spaniard’s contract situation, given his deal is set to expire at the end of the season.