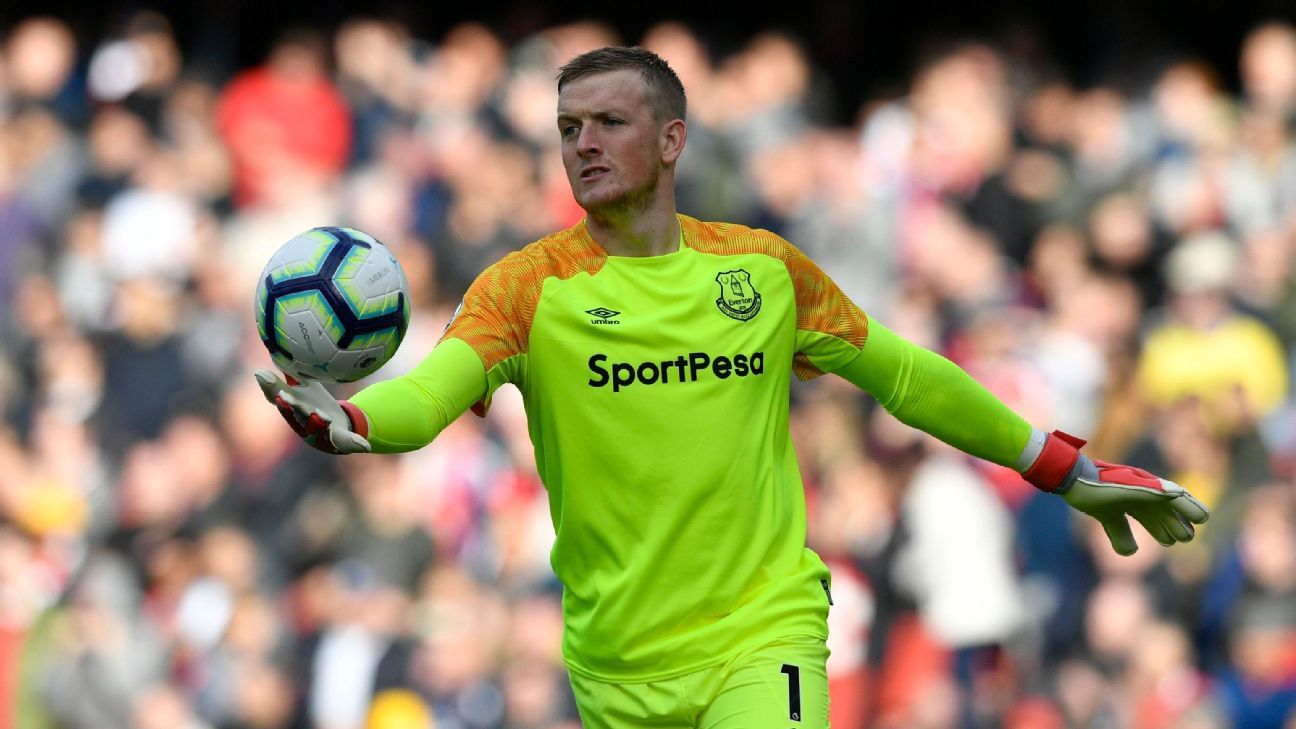 David De Gea is refusing to commit his long-term future, which means Manchester United are thinking who could replace the Spain international, according to The Sun.

The report says one name being floated is Everton goalkeeper Jordan Pickford. Though he would cost considerably more than the £35m Everton snapped him up for a few years ago. Now it’s more like £60m.

United see Pickford, who is also the England No. 1 in goal, as a perfect fit should De Gea bolt for another club, with Juventus being a possibility for the Spain keeper now that his Real Madrid “dream” appears to have died.

23.08 GMT That’ll do it for today’s edition of Transfer Talk. Be sure to join us again in a few hours, where we’ll be posting a fresh batch of the hottest transfer rumors from Monday’s sports sections.

23.00 GMT Jurgen Klopp typically isn’t one to let something stand in his way, and that won’t change in his pursuit for Borussia Dortmund’s Christian Pulisic.

According to the Mirror, Liverpool will sell recently signed midfielder Fabinho in a bid to beat out rival Chelsea to Pulisic’s signature. Klopp will likely need to spend £70m to bring Pulisic to Anfield, so selling Fabinho, who cost £43.7m in the summer, will certainly help Liverpool to afford the American playmaker. Maybe they’ll sell him to AC Milan, as Sky Sports suggests?

22.23 GMT Speaking of centre-backs, Manchester City’s Nicolas Otamendi wants to sit down with manager Pep Guardiola to discuss his future after finding himself on the outside looking in thanks to the young combo of John Stones and Aymeric Laporte.

According to Sun Sport, the fact that Otamendi hasn’t been able to figure into Guardiola’s plans might be good news for Real Madrid and Barcelona, both of whom are noted admirers of the player. After having made a total of 97 appearances for the club, it’s pretty clear why he’s unhappy.

21.23 GMT Napoli’s Senegalese centre-back Kalidou Koulibaly is arguably the most sought defender on Earth right now, but it’ll likely take a nine-figure sum to prise him from the Italians.

According to Italian outlet, La Repubblica, Manchester United have had a €90m offer “swiftly” turned down by Napoli for the player. Obviously, this is disappointing for a club who currently has the sixth-worst defence in the Premier League.

Apparently, Napoli president Aurelio de Laurentiis is sticking to his €100m valuation of Koulibaly and will continue refusing to negotiate any lower than that.

20.04 GMT Newcastle is looking to be a big player come January with FIVE rumored targets, according to Express Sport.

Newcastle really could use some new recruits but will the club finally open up their wallets and get manager Rafa Benitez the players he craves? That could be the difference between staying in the Premier League and relegation.

19.14 GMT As if Eric Bailly hasn’t gotten enough interest from the likes of Arsenal, Tottenham and, as we found out yesterday, Paris Saint-Germain, the Manchester United centre-back is now garnering interest from Italy and AC Milan.

Corriere dello Sport report that AC Milan have approached the Mancunians about signing the Ivory Coast international in January in order to shore up their defense that so far has gotten them to 5th in the Serie A table.

A move away from Old Trafford could be what the doctor ordered for Bailly as he has barely seen the pitch under Jose Mourinho.

17.05 GMT: Now some news connecting Barcelona and Ajax: a £60m deal for star centre-back Matthijs de Ligt is all but guaranteed to happen in January, according to The Mirror. The Blaugrana are expected to beat out interest from Tottenham and Liverpool.

16.10 GMT: Wolves want Liverpool’s Divock Origi, according to The Mirror. The Belgium striker isn’t getting a game at Anfield and would cost £20m.

14.28 GMT: More from the wonderful world of Manchester United transfer rumours. Corriere dello Sport claim the club have made an offer for Roma midfielder Lorenzo Pellegrini and will double his salary.

The Italy international has a clause in his contract which would see him depart for €30m in July, but Roma are keen to sign him to new terms and raise that value a bit.

Quite frankly, Kante would be mad to swap London for Manchester with the issues surrounding United at the moment. And it’s not like he’s unhappy at Stamford Bridge either. If this one comes off, we’ll eat two hats.

12.51 GMT: Chelsea don’t look like they are too bothered about losing defender Gary Cahill in the January transfer window and Corriere dello Sport report that AC Milan are keen to take advantage of that as Alessio Romagnoli is injured.

12.16 GMT: When Jose Mourinho turned up to watch Belgium vs. Iceland, many assumed it was to watch Toby Alderweireld.

However, the Daily Star on Sunday suggest that the Man United boss was actually there to watch Monaco’s Youri Tielemans. The 21-year-old midfielder was linked to Arsenal before moving to France this summer and is valued around £25m.

10.38 GMT: Liverpool midfielder Fabinho may not have much of a future at the club, despite only being signed in the summer. The Sunday Mirror claim the club want to offload him to fund a £70m move for 20-year-old Borussia Dortmund and United States winger Christian Pulisic.

The Sunday Express insist that they are planning on signing Hoffenheim and Germany midfielder Kerem Demirbay anyway. Either way, it doesn’t look great for Fab.

09.50 GMT: So Manchester United need a defender, we all know that. But you might be surprised by two names being linked this morning:

West Ham and Republic of Ireland centre-back Declan Rice is one. The 19-year-old has been getting rave reviews for his performances in the Premier League and the Daily Star reckon that’s enough for Jose Mourinho to be interested.

If you believe the Sunday Express, however, Jose wants someone with a bit more experience: 27-year-old Lewis Dunk of Brighton, who made his England debut this week.

Both options are likely to be a lot cheaper than the £70m Leicester want for Harry Maguire. But they’re not quite “world-class” just yet.

09.00 GMT: You’re not a top club unless you get linked with a young Brazilian talent and Atletico Mineiro’s 18-year-old attacking midfielder Bruno Roberto is the latest on the radar of Manchester United, Chelsea, Liverpool, Tottenham and Manchester City, so say the Mail on Sunday.

With The Express reporting that Chelsea may have a transfer ban on the horizon, Blues boss Maurizio Sarri has several targets in mind when the winter transfer window opens up in January.

Ajax and Netherlands midfielder Frenkie de Jong has been the subject of plenty of interest from around the world, but The Sunday Mirror report that one club has made the first move to sign him.

Manchester City are reportedly “close to sealing a £61m deal” for the 21-year-old, who would be a perfect replacement for the 33-year-old Fernandinho.

And that means Barcelona, who were the other club most linked with him, look set to miss out.

AC Milan will keep Chelsea loanee Tiemoue Bakayoko but only if the price is dropped by €15 million, according to Tuttosport.

The French defender struggled at Stamford Bridge and has had some uneven performances since arriving to San Siro in the summer.

For the deal to go through, however, the Rossoneri want Chelsea to drop the original agreement from €40m to €25m.

– Reading’s under-23 striker Danny Loader is getting comparisons to Borussia Dortmund’s Jordan Sancho, which is why several Bundesliga sides are targeting the England youngster.  The Daily Mail reports that Borussia Monchengladbach, Wolfsburg, and Hertha Berlin are sides who have scouted the Under-17 World Cup winner.

– Juventus forward Juan Cuadrado told Marca that he is only focused on staying with the Serie A side, despite seeing his playing time reduced by Cristiano Ronaldo.